You are here: Home / News Articles / Taking to the ‘airwaves’ to help Kenya’s smallholder farmers fight back against devastating papaya mealybug 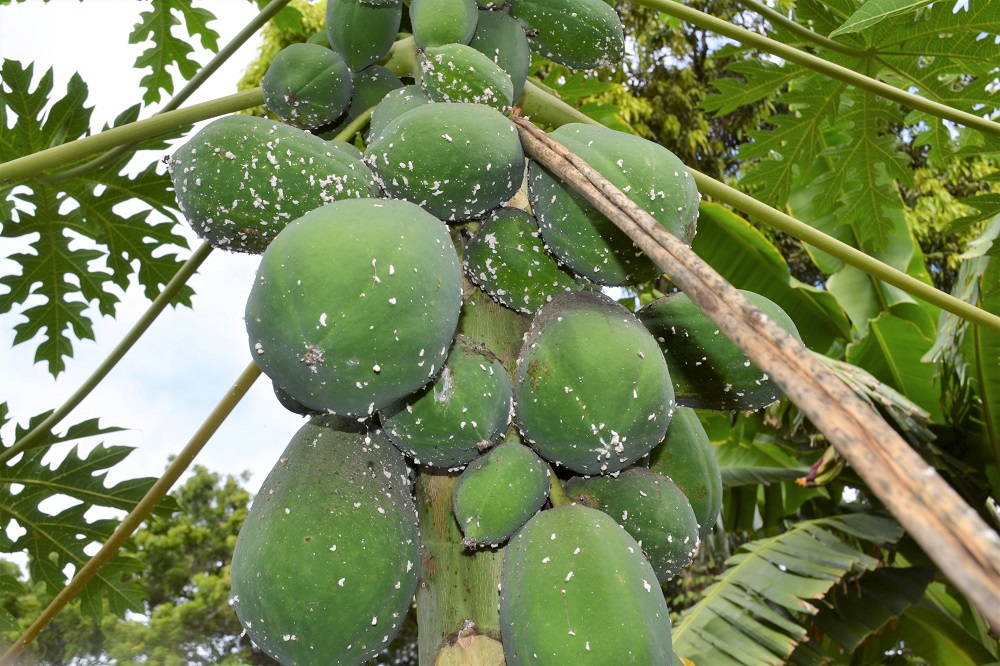 CABI’s experts in extension communications are literally taking to the ‘air waves’ having just launched a major radio campaign to help Kenya’s smallholder farmers fight back against the papaya mealybug pest which can devastate their crops.

Stephanie Gakuo, Development Communications Specialist based at CABI’s Kenya centre in Nairobi, teamed up with the Kenyan Government’s Ministry of Agriculture and its Head of Horticulture Division Mr Joshua Oluyali who launched the campaign on Radio Kaya on Sunday (4 October). Representatives from the National Museums of Kenya and the Kenya Plant Health Inspectorate Service (KEPHIS) also took part in the launch.

The campaign, which is funded under the Darwin Initiative and CABI’s Plantwise programme, aims to educate farmers on practical ways to manage the papaya mealybug pest and mitigate their losses in three coastal counties where the major commercial papaya farms are located – Kwale, Kilifi and Mombasa.

Ms Gakuo said, “Papaya is rated as Kenya’s 5th most important fruit crop and is crucial for both the local and export market. The Papaya mealybug is considered a key threat to the country’s papaya production – estimated in 2016 at 107,591 tonnes and which earned farmers Ksh. 2.2 billion ($18.4 million) according to a Horticulture Crops Development Authority (HCDA) validated report 2015-2016.

“The pest is now found in almost half of the country sustained by the climate and year-round availability of suitable host plants that provide favourable conditions for the pest.”

She said the management of the pest, however, has proved difficult to both commercial and small-scale farmers. Studies by Kenya Agricultural and Livestock Research Organisation (KALRO), Kenya Forestry Research Institute (KEFRI) and CABI, between 2016 and 2019, reported a mean yield loss ranging from 56.7% to 91% for coastal counties. 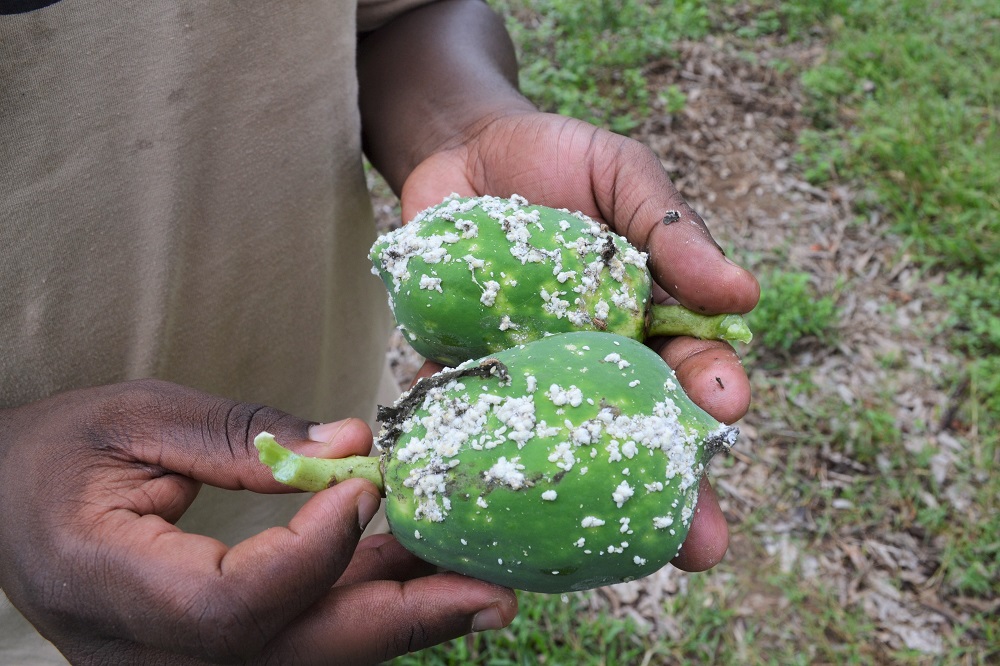 Papaya mealybug on a farm in Mombasa, Kenya (Credit: CABI).

Kwale County lost over 60% of its papaya crop between 2017-18, with production dropping from 20,005 to 6,248 metric tonnes. Household income loss attributed to the pest is estimated at Ksh. 23,000 ($212). Small scale farmers desperate for solutions have resorted to undetermined local remedies and indiscriminate chemical use to manage the pest.

Other notable government interventions include the certification of suppliers of planting materials, capacity building for extension workers and the implementation of phytosanitary controls to stem transmission through the movement of contaminated vegetative material.

The pest, native to Central America, is thought to have entered the country through cross border trade. The radio campaign also aims to create awareness about transmission of the mealybug alongside its management using cultural, mechanical and biological measures.

Back in August, CABI shared their expertise on the papaya mealybug as part of a new multi-agency technical brief addressing the description, identification and sustainable management of the pest in Kenya.

The brief, which contains the latest agreed advice for papaya mealybug management, is the source document for the radio campaign and will also be used to support the development of a range of information materials for extension workers, agro-dealers and farmers who grapple with the pest that can devastate whole crops if left to take hold.

Meanwhile, a team of CABI researchers are currently collaborating with institutions working together under the Darwin Initiative, including KALRO, KEPHIS and the University of Nairobi to implement a classical biocontrol program using a parasitoid called Acerophagus papayae that feeds on the Papaya mealybug.

CABI determined through research in 2019 that the papaya mealybug lacks effective natural enemies in the country. This led to an application for authorisation seeking approval for the introduction of A. papayae to enable the pest’s sustainable control.

This is part of work conducted under the Darwin Initiative funded project and CABI’s Plantwise programme – funded by the International Fund for Agricultural Development (IFAD).

The papaya mealybug technical brief can be downloaded here.

Find out also how CABI has been working in partnership to help address scale insect threats in Kenya from the project page. 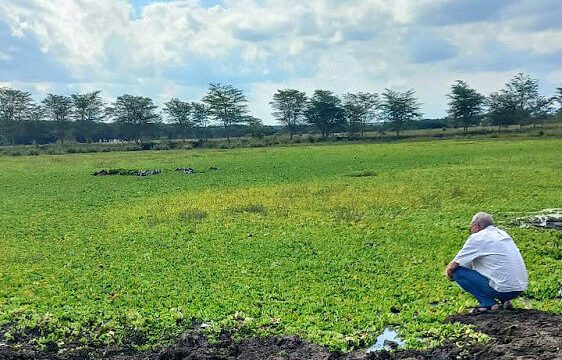 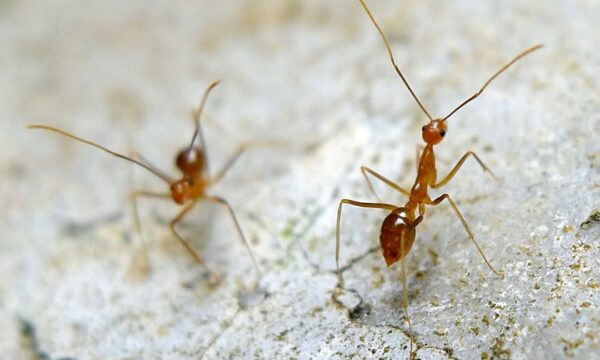 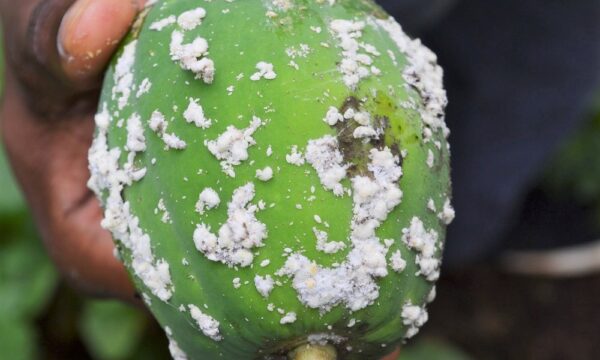 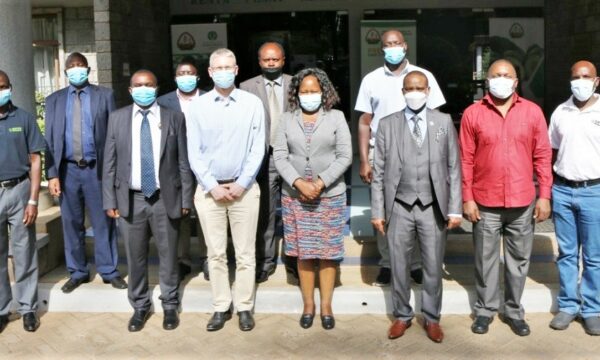