You are here: Home / News Articles / ‘Tuning in’ to help banana farmers reap the ‘fruits’ of more profitable harvests 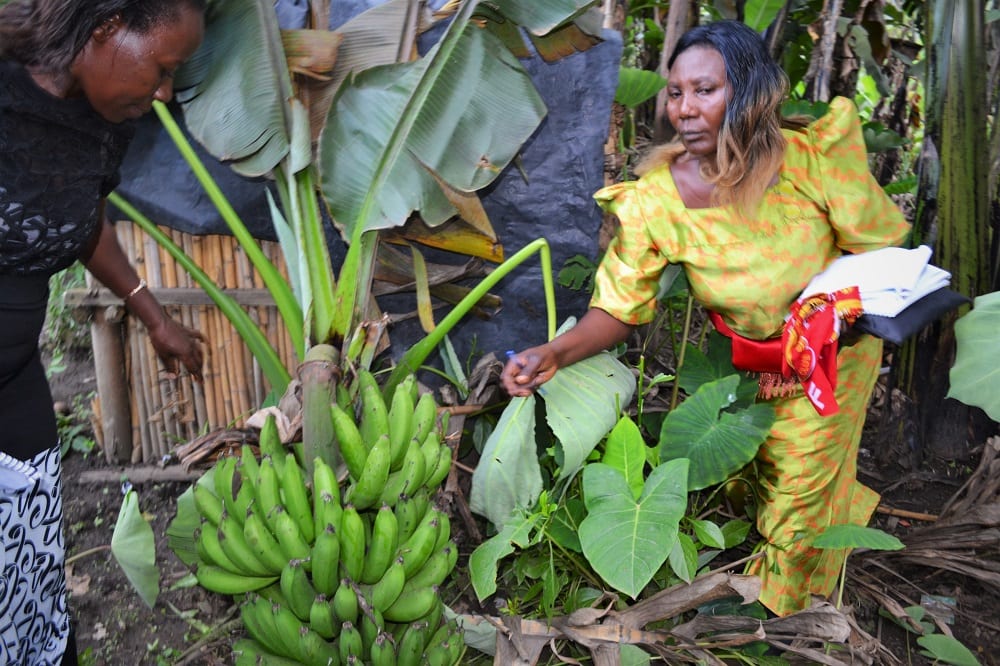 Bananas are worth $4.3 billion a year to the economies in Uganda and Tanzania but farmers need help to tap into the crop’s full potential

CABI is working in partnership to help thousands of smallholder farmers in Uganda and Tanzania reap the ‘fruits’ of more profitable harvests as part of $5.7 million Bill & Melinda Gates Foundation-funded banana agronomy project.

A 12-week radio campaign in Uganda – which featured weekly live talk shows where farmers gained expert advice on how to tackle crop-devastating banana pests and diseases, such as banana bacterial wilt and banana weevil – was held along with printed materials and field demonstrations given on how to grow healthier bananas to try and boost an industry worth $4.3 billion a year.

The ultimate aim of the Banana Agronomy Project, which involves CABI and the Africa Soil Health Consortium (ASHC) working with leads partners the National Agricultural Research Organisation (NARO) and the International Institute of Tropical Agriculture (IITA), is to bridge a yield gap from the current average of 10ton/ha/yr to 25ton/ha/yr – worth $14.3 million.

Other partners include Bioversity International and the Tanzania Agricultural Research Institutes (TARI) of Maruku and Tengeru who are working to help smallholder farmers improve their livelihoods and national food security where Highland bananas are worth 5 percent of the East and Central African (EAC) region’s GDP.

Despite more than half of all bananas grown in Africa originating from Uganda and Tanzania, banana production in these countries only achieves 9 percent of its potential yield due to pests and diseases and poor agronomic practices. 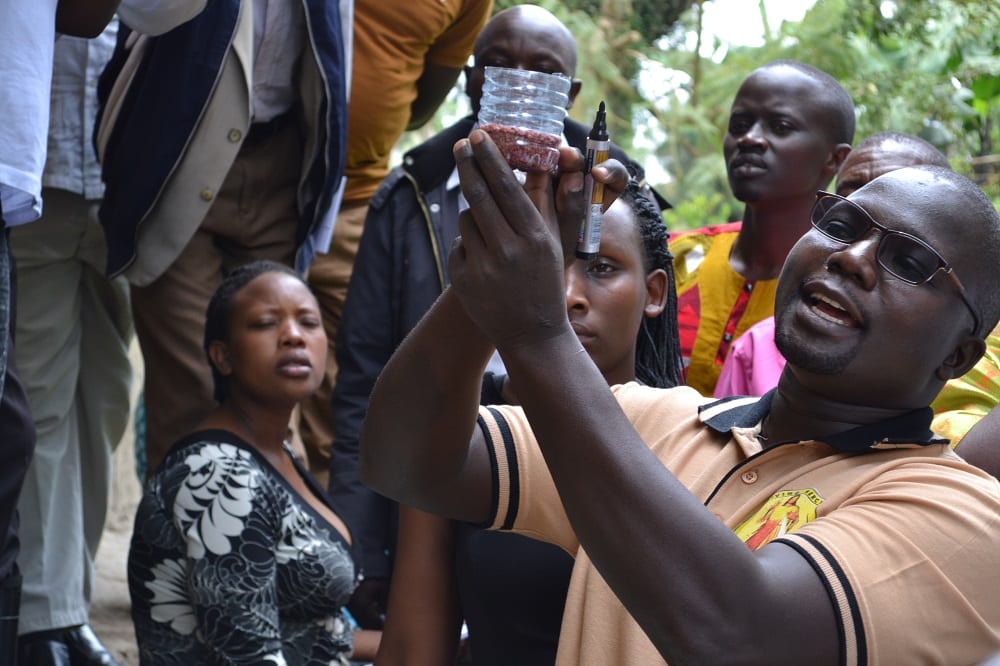 Demonstrating the use of fertilizer – measured using an old water bottle

CABI is supporting the project with its expertise in development communications in support of research work led by NARO and IITA.

Farmers were given advice on agronomic practices including which variety of banana to plant, the use of fertilizers, intercropping, mulching to improve soil fertility and help prevent erosion of the soil, as well as the importance of sterilizing tools between planting to help reduce the risk of banana bacterial wilt which can lead to 100 percent loss of crop.

James Watiti, Coordinator Development Communications and Extension for CABI based in Nairobi, Kenya, said, “Over 50 million people in the EAC region depend on Highland bananas for their food and income. However, yields are not as productive as they could be as farmers are battling the joint challenges of pests and diseases as well as nutrient deficiencies and drought stress of the soil needed to grow healthy crops.

“With the help of radio, we are achieving our target of reaching 25,000 households in Uganda and Tanzania – providing them with appropriate knowledge and skills in good management practices that will improve farmers’ productivity in the long term.” 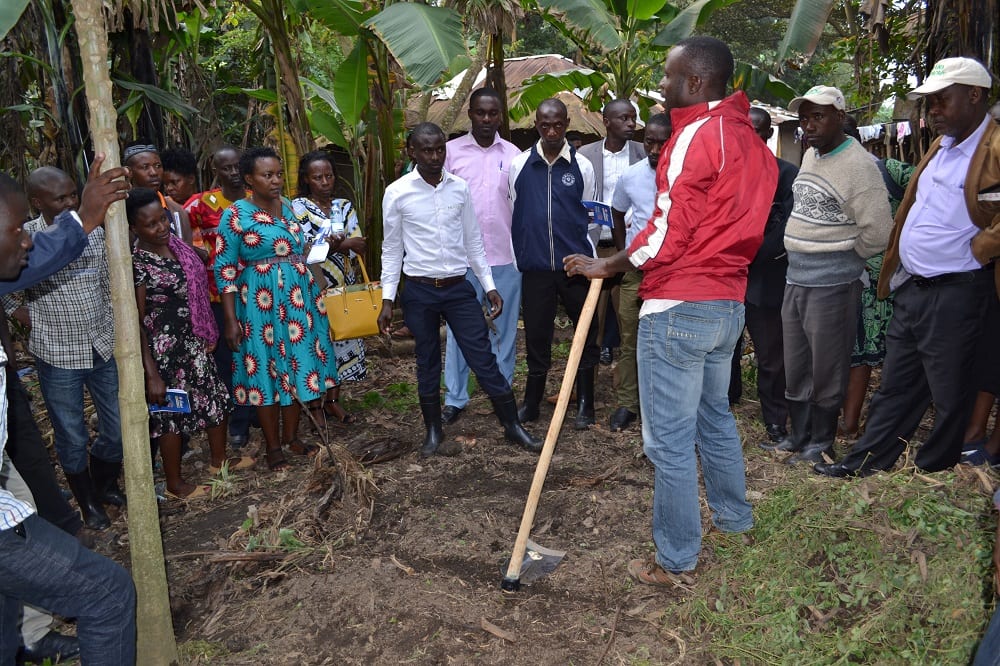 Five radio stations took part in the campaign, including Voice of Toro, Voice of Kamwenge, Radio West, Musana FM and CBS FM, and steps were taken to gather the opinions, experiences and perceptions of more than 20,000 listeners who responded to questions using mobile phone text messages.

The majority of responses rated the banana crop as being the highest priority for them followed by hinderance to production of marketable bunches, challenges faced in applying manure and mulch, water conservation measures used and methods used to control pests and diseases.

Christine Alokit, Communication and Extension Scientist for CABI based in Uganda, said CABI’s work to help the banana farmers grow more and lose less to pests and diseases is being supplemented by the help and advice provided by the CABI-led Plantwise programme which has developed a set of Pest Management Decision Guides for bananas as well as other priority crops.

She added, “The success of the Banana Agronomy Project, from a development communications point of view, rests in the diversity of the methods used to reach out to as many farmers as possible in ways which are easily accessible to them.

“Radio has a wide reach and is nicely complimented with other communications activities including printed materials, the use of mobile phones and face-to-face field day demonstrations.

“However, while over 45 percent of attendees to the field events were women only 24 percent of females responded to the poll questions on the radio. Therefore, special consideration is needed to ensure we reach and engage as many women farmers as possible.”

The scaling agents from both Tanzania and Uganda have also been trained on use of communication materials developed and these are reaching on to more than 50 farmers through training.

Other innovative ways in which farmers will be reached in future, with key information on how to grow more profitable banana crops, include a banana drama which is currently being shot and will be shown at special screenings in Uganda and on YouTube.

In October 2014, CABI joined the $1.8 million Australia-Africa Plant Biosecurity Partnership with the aim of strengthening skills in plant biosecurity in Africa. This includes enhancing the capacity of middle managers and decision makers in countries – such as Uganda and Tanzania – to address, build and enhance national and regional biosecurity control capacity with the ultimate aim of accessing new global markets for staple crops including bananas.

In December 2017 CABI scientists warned that the effects of the fungus known as Panama disease tropical race 4 (TR4), together with the Banana Bunchy Top Virus (BBTV) and the Banana Skipper butterfly (Erionota spp), could destroy $35 billion worth of banana crops across Asia, Africa and Latin America unless a concerted worldwide framework of prevention, detection and management is implemented.

Learn more about the Banana Agronomy Project from the dedicated webpage.