You are here: Home / News Articles / CABI scientists are leading the fight to control one of the UK’s most invasive weeds – Himalayan balsam 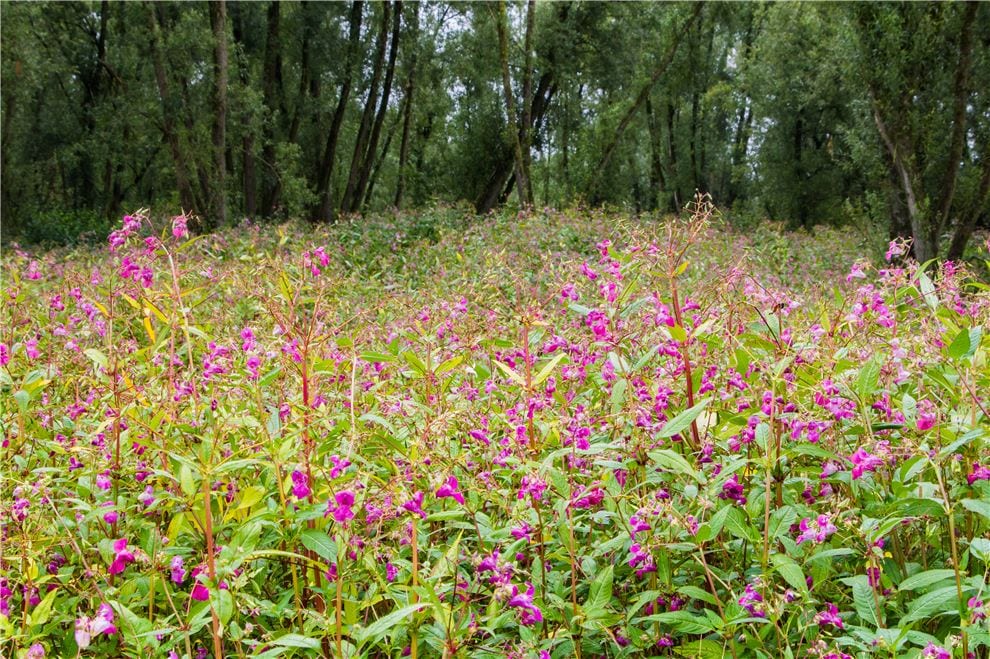 14 January 2019 – CABI experts in the field of classical biological control are leading the fight to manage one of the UK’s most invasive weeds -Himalayan balsam – thanks to the nationwide release of the rust fungus Puccinia komarovii var. glanduliferae.

Dr Carol Ellison, who has over 30 years’ experience of the biological control of weeds using fungal pathogens, told a specially convened NERC-sponsored workshop on Himalayan Balsam at Royal Holloway, University of London, the rust release programme is progressing well but new strains are required in order to achieve countrywide control.

As an annual, Himalayan balsam dies back in the winter, and where the plant grows in riparian systems, can leave river banks bare of vegetation and liable to erosion. Dead plant material can also enter the river, increasing the risk of flooding.

Since 2006, surveys have been conducted throughout the plant’s native range to identify natural enemies that could be considered as biocontrol agents in the introduced range. Many of the natural enemies, both fungal and arthropod species, collected and identified during the survey have been rejected as suitable control agents.

However, one natural enemy, the rust fungus Puccinia komarovii var. glanduliferae was observed causing significant impacts on Himalayan balsam in the Indian Himalayas and was exported to CABI’s quarantine facility in the UK in 2010 to undergo extensive safety testing.

The rust, a Puccinia species, is an autoecious, macrocyclic (completing its entire life cycle on a single species), five spore staged rust fungus which infects the stem and leaves of Himalayan balsam throughout the growing season.

Dr Ellison and CABI PhD student Suzy Wood updated fellow scientists at the workshop on their research, funded by a range of partners including the UK Department for Environment, Food and Rural Affairs (DEFRA), Natural England and The Welsh Government*, which saw the rust released at 34 sites in 9 counties across the UK.

Dr Ellison said, ‘Traditional control methods to manage Himalayan balsam have so far proved inadequate. The challenge has been to find an insect or plant pathogen that exclusively attacks the weed without adversely affecting indigenous species in the surrounding environment.

‘We’ve found that while the rust Puccinia komarovii var. glanduliferae has excellent infection at many sites under favourable weather conditions it has only overwintered at 4 sites.

‘Further research is needed to investigate why good leaf infection does not always lead to field establishment and, therefore, why the two strains released are not effective for all Himalayan balsam populations in the UK.

‘New rust strains are required in order to achieve countrywide control and it is pleasing that molecular work has already provided compelling evidence where to search for them in the native range.’

Dr Ellison added that the molecular analysis of Himalayan balsam populations has not only involved collecting leaf samples from the 34 sites in the UK but data has also been gained from Ireland, India, Pakistan and Kashmir. The aim is two-fold – to identify the number of plant genotypes in the UK and link these to genotypes in the native range.

Suzy Wood presented her NERC-funded research which focuses on the ecological interactions of the rust. These include studies investigating how the rust may aid the recovery of native plant and invertebrate communities, to reverse the negative impacts that Himalayan balsam has on UK biodiversity.

Other scientists who presented at the workshop included Professor Alan Gange, from Royal Holloway, University of London and Dr Rob Tanner from the European Plant Protection Organisation, and Dr Michal Gruntman, of the University of Tübingen, Germany**.

Find out more about CABI’s work on the Biological control of Himalayan balsam, in partnership with the National Bureau of Plant Genetic Resources (ICAR) India and Plant Protection Institute, Centre for Agricultural Research, Hungarian Academy of Sciences, from the project page or the dedicated Himalayan balsam website.