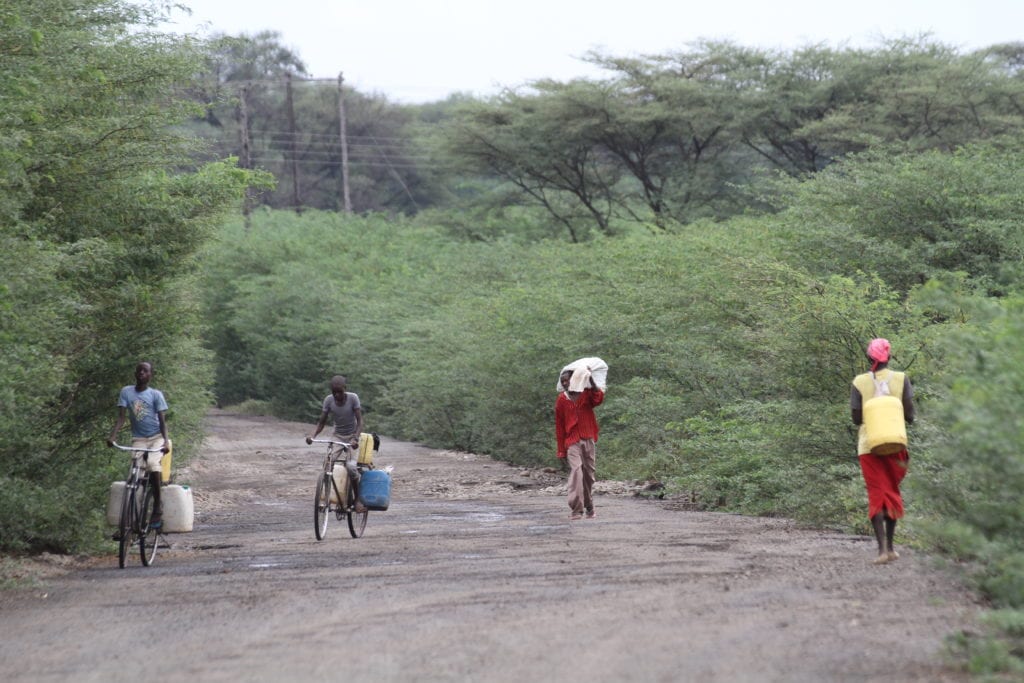 A team of international scientists, including CABI’s Dr Urs Schaffner, have recommended ways to manage the devastating spread of the woody weed Prosopis juliflora, where in Baringo County, Kenya, its coverage rapidly increased by 2,031 percent in just 28 years.

PhD student Purity Rima Mbaabu, affiliated to the University of Nairobi and co-supervised by Simon Choge, Kenya Forestry Research Institute, Dr Sandra Eckert, Centre for Development and Environment, University of Bern, Switzerland, Profs. Maina Gichaba and Prof. Daniel Olago, University of Nairobi, and Dr Schaffner, is lead author of new research which states that the rates of Prosopis invasion in Kenya are a ‘major threat to the environment and rural people’s livelihoods.’

The study calls for the ‘urgent implementation of coordinated and sustainable Prosopis management in Baringo County and other invaded areas in East Africa’.

Ms Mbaabu and fellow researchers, in the Remote Sensing published paper ‘Spatial evolution of Prosopis invasion and its effects on LULC and livelihoods in Baringo, Kenya’, propose that the invasive Prosopis – which increased from 882 ha in 1988 to 18,792 ha in 2016 – can only be managed through an integrated management approach.

Integrated weed management is usually based on a combination of chemical, biological and mechanical control measures to reduce density of a weed in the invaded range and to slow down or stop its spread into uninvaded areas.

The scientists used a combination of dry and wet season Landsat satellite data, acquired in a seven-year time interval between 1988 and 2016 and performed a supervised Random Forest classification, to assess the impact of the Prosopis on land use and land cover (LULC) in the local environment, and its associated impact on (agro)-pastoral livelihoods. 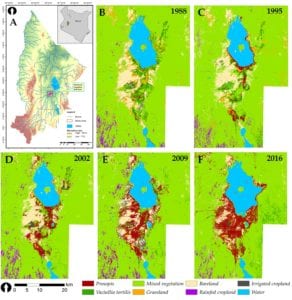 Ms Mbaabu said, “While Prosopis species provide wood for local use and for charcoal production, they are a major threat to the environment and to rural people’s livelihoods because they can suppress or replace native biodiversity and alter ecosystem functions and services. In particular, they severely limit livestock production, increase costs of crop production and consume a lot of water, thereby causing significant economic damage.

“Building on the long-term management experience gained in Australia, we propose that a combination of management options is required to achieve the sustainable and effective control of Prosopis in Baringo and other areas where it has spread.

“This includes regular inspection of areas at risk of invasion and the targeted removal of small Prosopis populations at the invasion front as well as ensuring active land use which also plays a critical role in controlling its spread.”

Prosopis was introduced in Baringo County in 1982 as part of the Fuelwood Afforestation Extension project to help reduce soil erosion, provide fodder for livestock and help reduce the effects of dust storms.

But the species, whose spread can be explained by a number of different factors, including dispersal of seed by livestock and wildlife and extreme climatic events such as the floods of 2013, soon became unmanageable due to their fast proliferation and ability to survive cutting by coppicing.

Dr Schaffner added, “Many exotic trees and shrubs have been introduced into Africa, but a few have escaped cultivation and have become destructive alien invasive species reducing native biodiversity and limiting the livelihoods of those that live in rural communities.

“In Eastern Africa, where those living in rural communities are more vulnerable to the impacts of invading species, there is a lack of coordinated and effective sustainable management of woody alien invasive species.

“This latest research will help form sustainable land management’ strategies that will help the countries to mitigate the impacts of the species.”

The paper was published as part of the wider CABI-led project “Woody invasive alien species in East Africa: Assessing and mitigating their negative impact on ecosystem services and rural livelihood” which is funded by the Swiss National Science Foundation and the Swiss Agency for Development and Cooperation and also involves research in Ethiopia and Tanzania.

Funding: This research was funded by the Swiss National Science Foundation (SNSF) and the Swiss Agency for Development and Cooperation (SDC) as part of the Swiss Programme for Research on Global Issues for Development (r4d), for the project “Woody invasive alien species in East Africa: Assessing and mitigating their negative impact on ecosystem services and rural livelihood” (Grant Number: 400440_152085). Urs Schaffner was supported by CABI with core financial support from its member countries. For more information see http://www.cabi.org/about-cabi/who-we-work-with/key-donors/

The Woody Weeds project aims to understand the impacts of woody invasive alien species on biodiversity, ecosystem services and human well-being, and develop management plans for these. The project is taking place in three East African countries and this video introduces its work in Afar Region, Ethiopia.