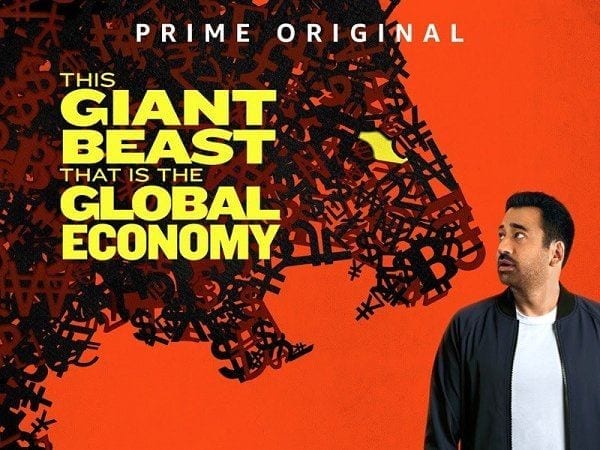 Poster advertising ‘This Giant Beast that is the Global Economy’

‘Without rubber, the economy as we know it ceases to exist’

22 February 2019 -CABI is today sharing its expertise on the devastating rubber tree blight disease- that could severely impact upon the world’s rubber production for essential items including tyres, shoes and the seals on a multitude of household and industrial items- as part of a major new Amazon documentary series now airing.

Dr Harry Evans, who has dedicated more than 40 years of his career to studying rubber tree blight disease (Microcyclus ulei), stars in ‘This Giant Beast That is The Global Economy’ alongside Kal Penn,  American actor, comedian, producer and former communications advisor to President Barack Obama.

Dr Evans, billed affectionately in the show as ‘the world’s most badass plant pathologist’, takes part in the tongue-in-cheek episode which otherwise takes a serious look at what would happen if rubber tree blight disease took hold as an invasive species,  threatening the existence of rubber trees in Asia and, therefore, the global economy.

The programme highlights that natural rubber is a $26 billion industry but rubber tree blight – where there is no vaccine or cure – could destroy the entire rubber industry.

Interviewed at CABI’s Egham office in Surrey, UK, and featuring shots of CABI’s Culture Collection and nitrogen tanks where samples can be freeze-dried, Dr Evans tells Penn that once the disease ‘gets going through a plantation’ it ‘just wipes it out’ and could ‘disrupt the whole world economy.’ He added that the disease is ‘very difficult to contain.’

More than 100 million people around the world subscribe to Amazon Prime and Penn has appeared in numerous hit US shows and films including Designated Survivor, the Harold & Kumar series and House. Other popular shows aired by the network include The Grand Tour starring Jeremy Clarkson, James May and Richard Hammond.

Carol McNamara, Chief Commercial Officer, said, ‘CABI is delighted to have been able to showcase its expertise in invasive plant diseases, which in the case of rubber tree blight, can have a devastating impact not only on smallholder farmers and their livelihoods but also the global economy.’

You can see Dr Evans in the ‘The Rubber Episode’ on Amazon Prime now.

Find out more about CABI’s work to help manage invasive species through its Action on Invasives programme www.invasive-species.org

Amazon’s preview of ‘The Rubber Episode’

What if planes couldn’t fly, or, more specifically, couldn’t land? What if trucks couldn’t transport food? This isn’t some lame sci-fi plot. Without rubber, the economy as we know it ceases to exist. Kal Penn traces the path of rubber — from trees to tires to the tip of his p… uh… pencil… and uncovers a fundamental blind spot in the free market economy that is putting us all at risk.