You are here: Home / Projects / Establishing the psyllid: field studies for the biological control of Japanese knotweed

Japanese knotweed is highly damaging. It spreads extremely quickly, preventing native vegetation from growing and has significant impacts on infrastructure. Current control methods rely mainly on chemicals. Research, however, has identified a tiny psyllid from Japan as a suitable and safe agent to control Japanese knotweed in the UK, Canada, the Netherlands and USA. The current aim of this project is to achieve establishment and impact of the psyllid on Japanese knotweed in these countries. 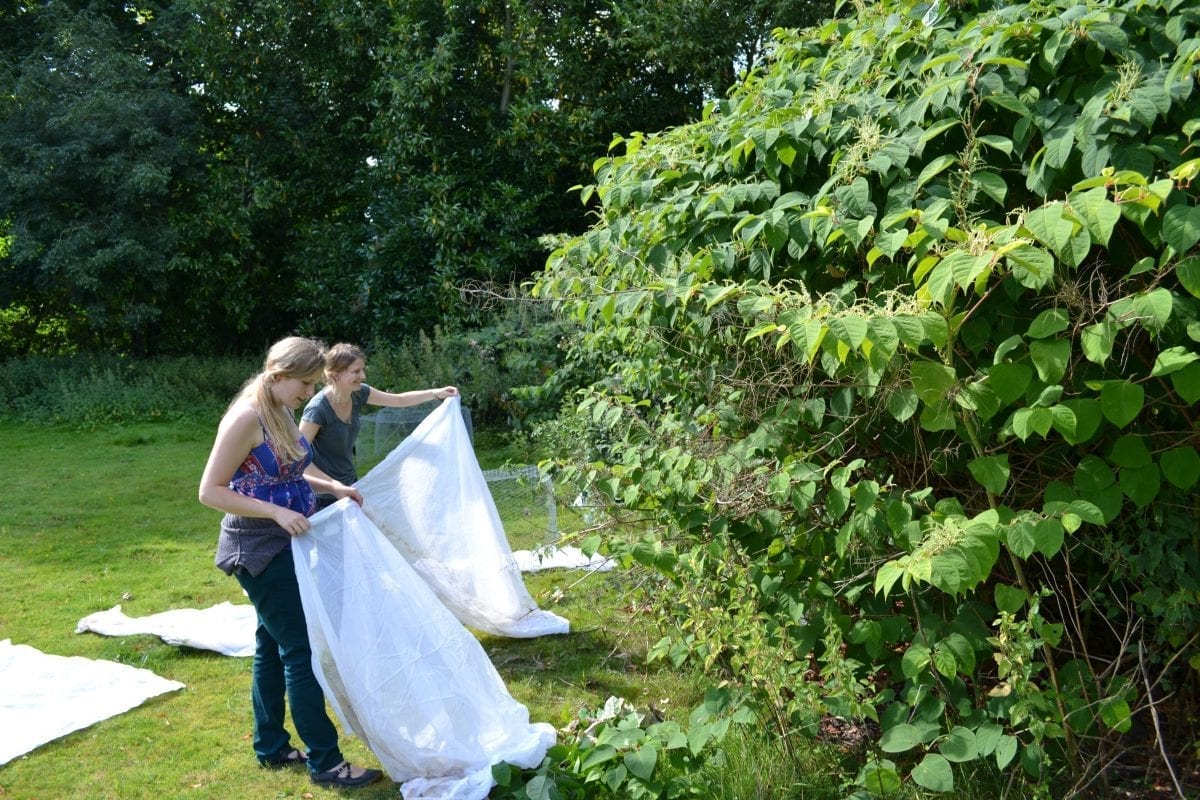 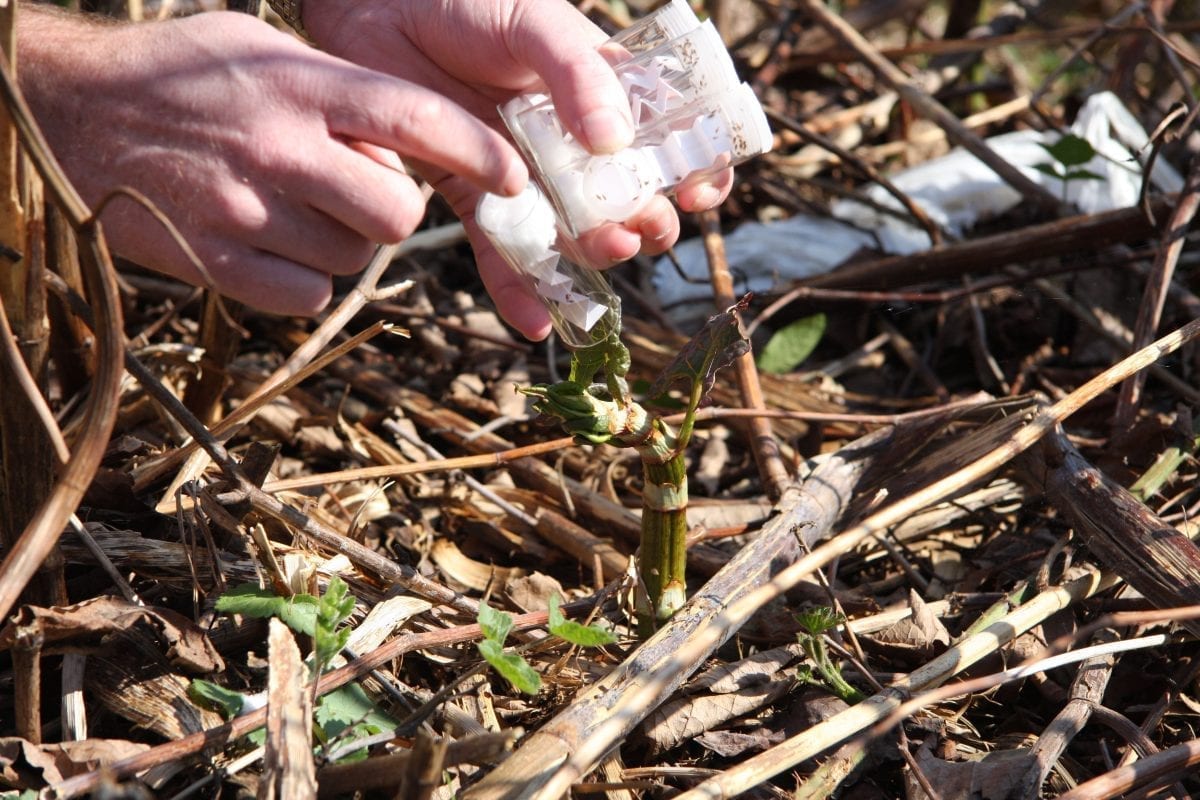 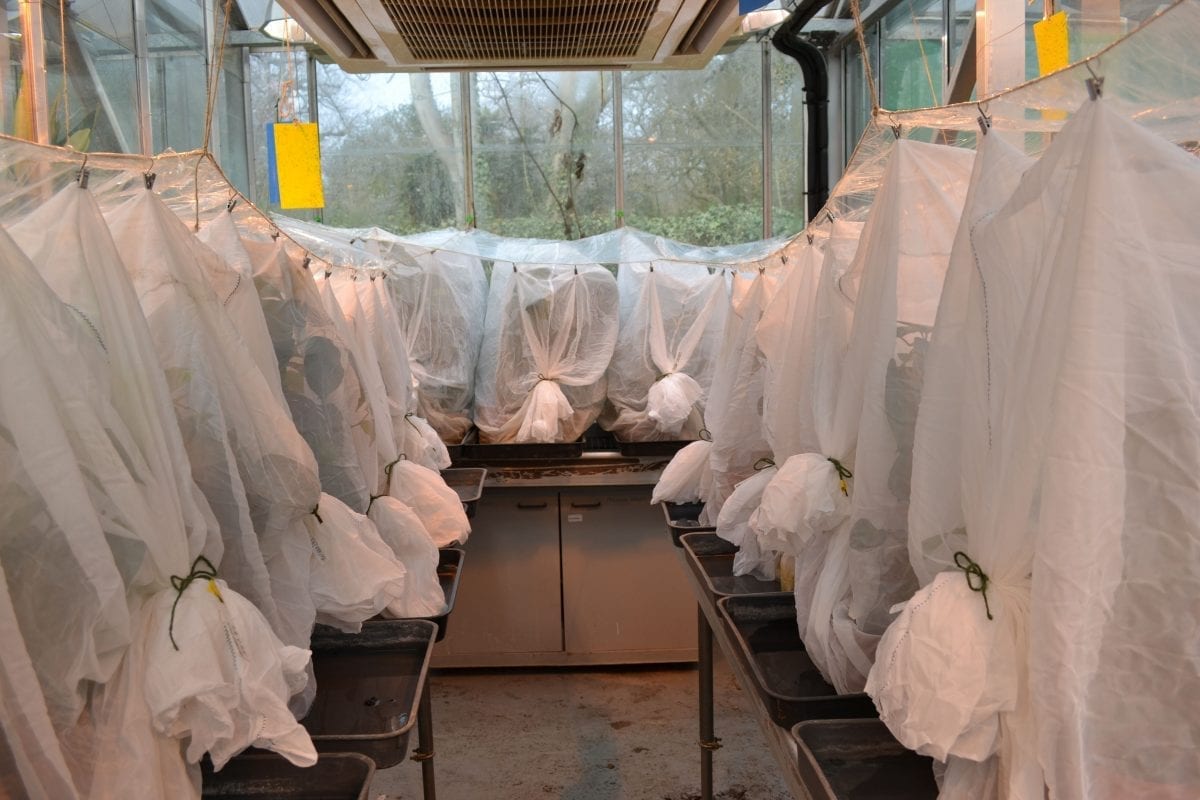 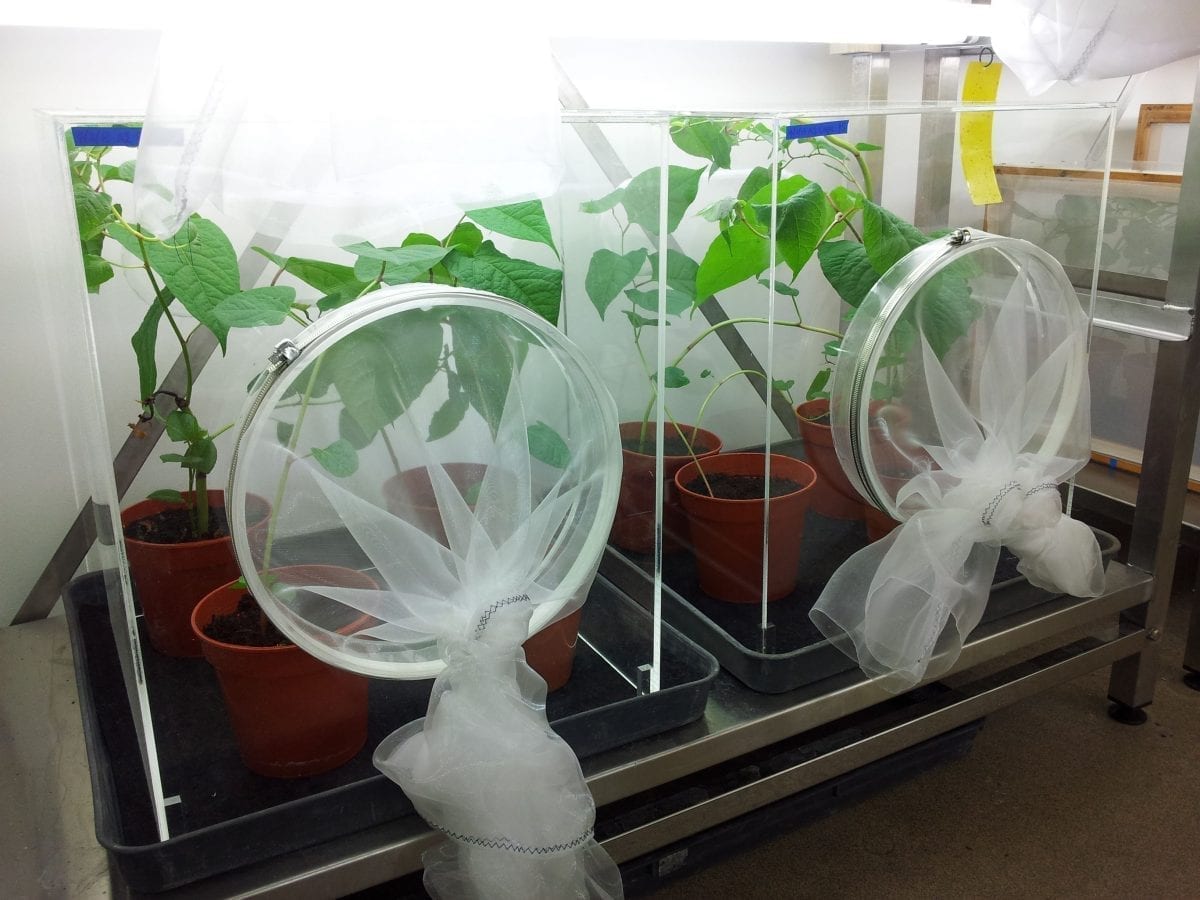 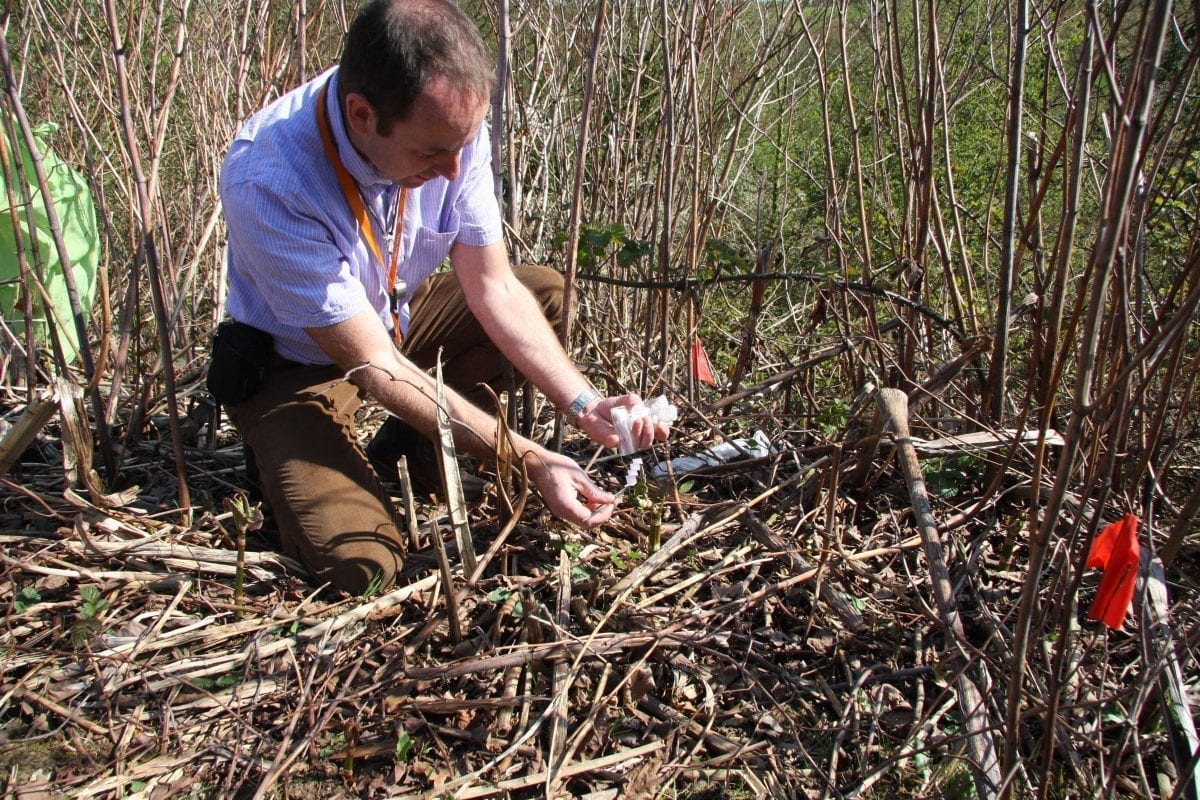 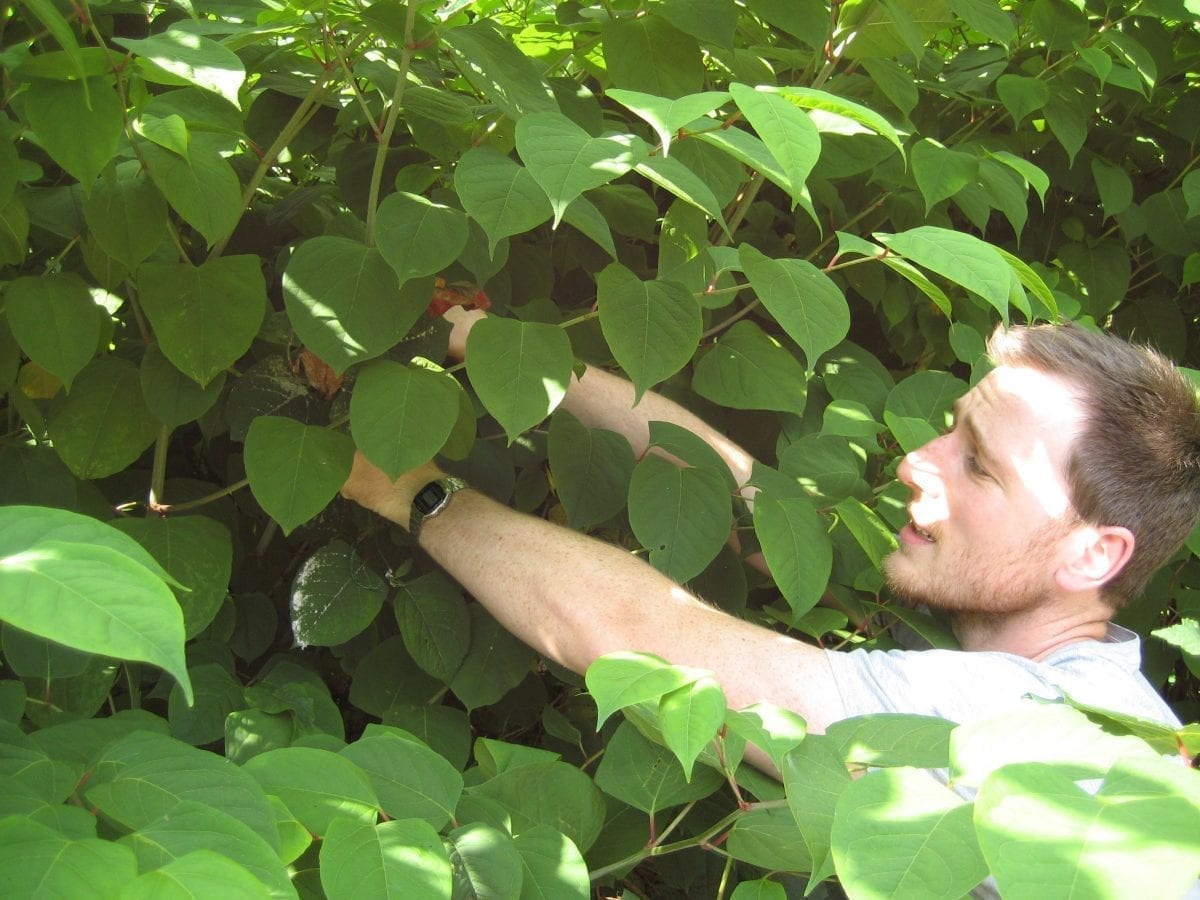 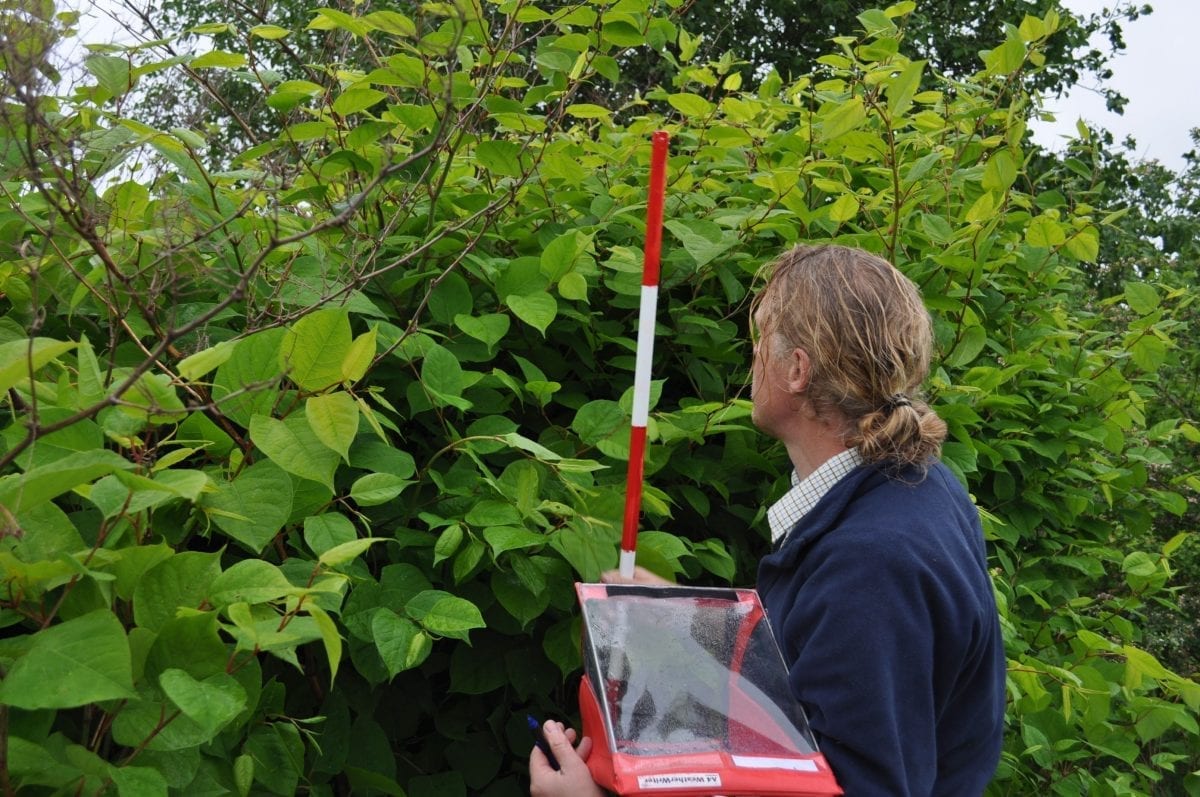 Researcher measures the height of knotweed at a monitoring site 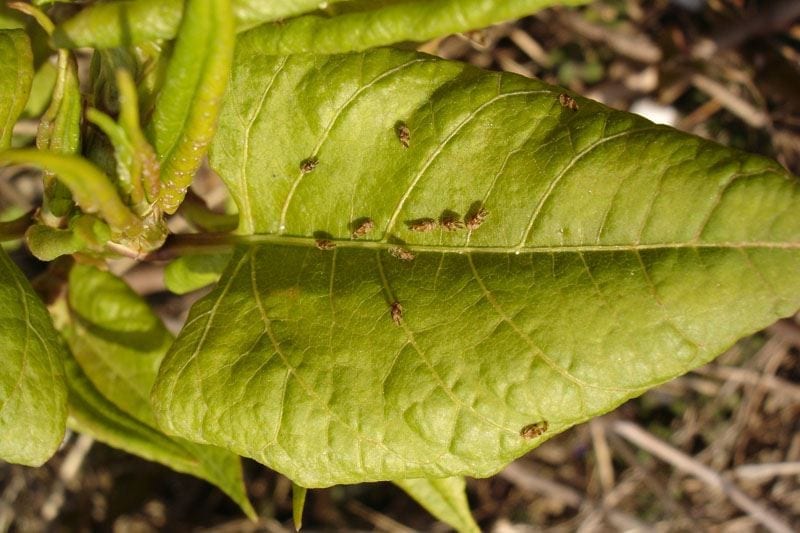 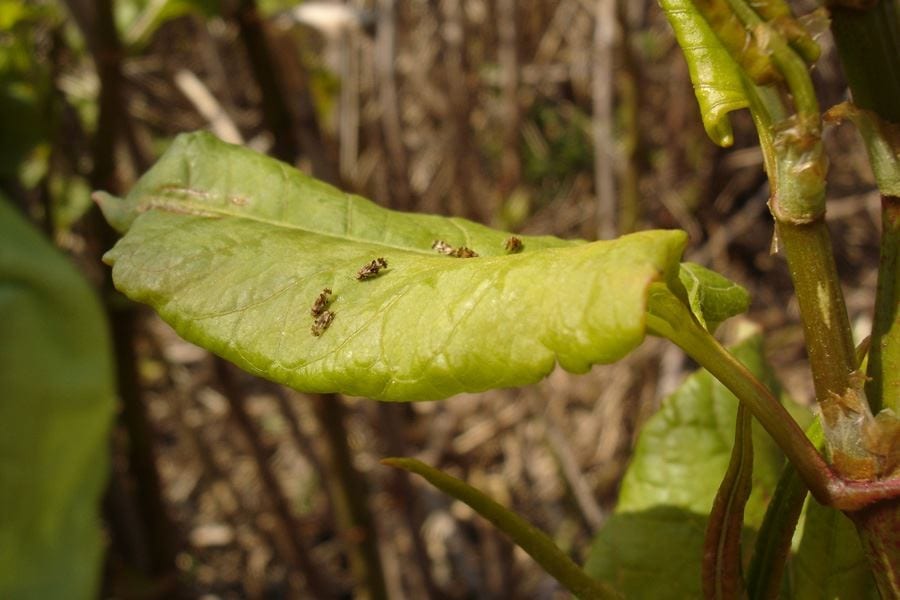 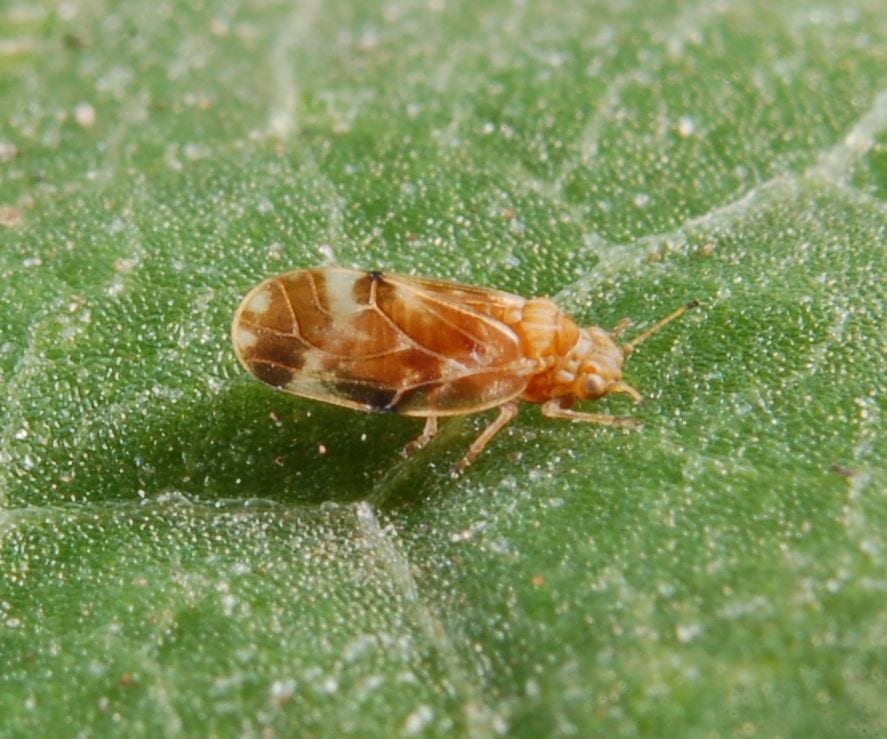 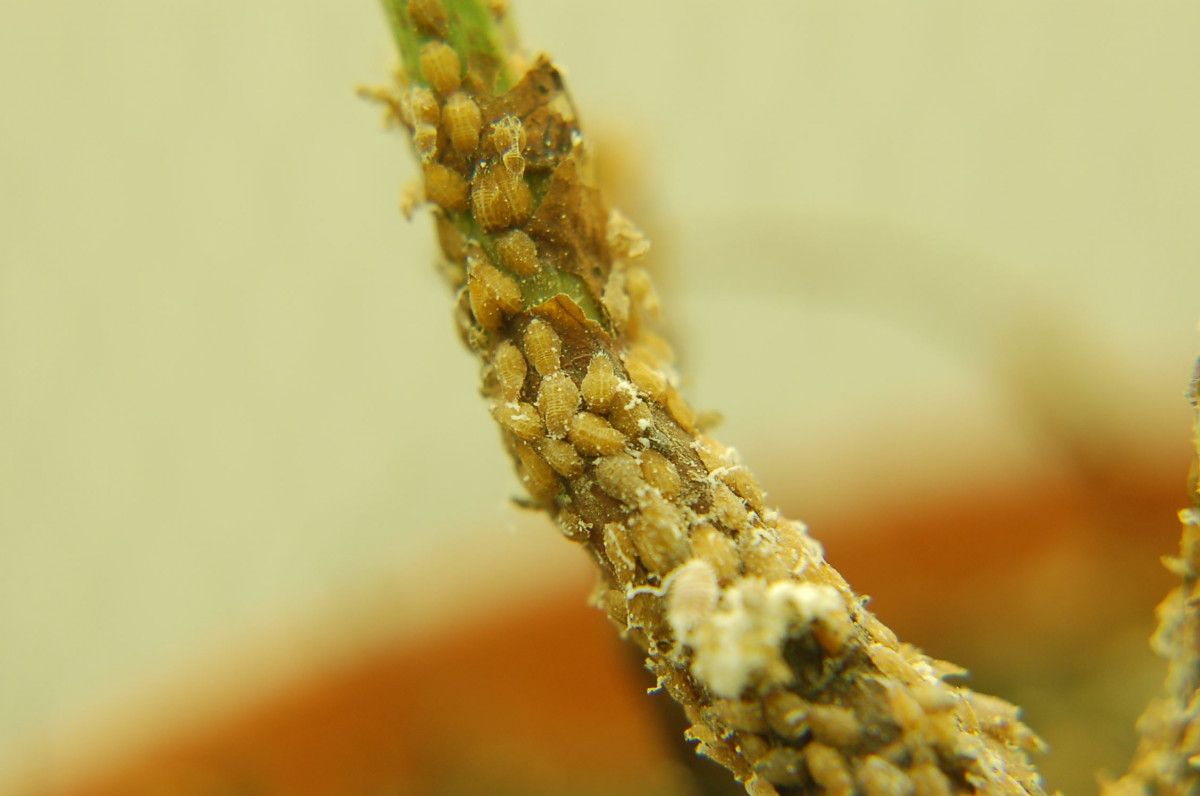 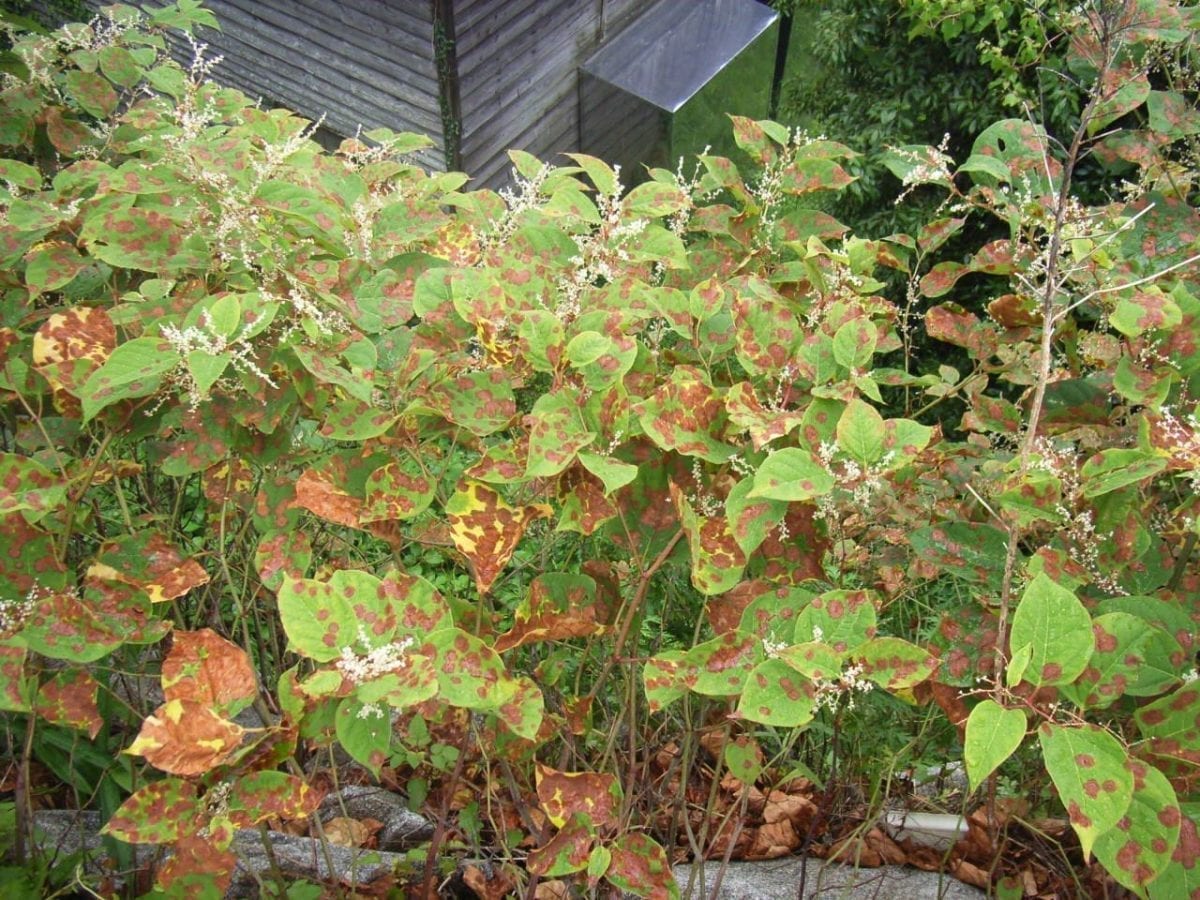 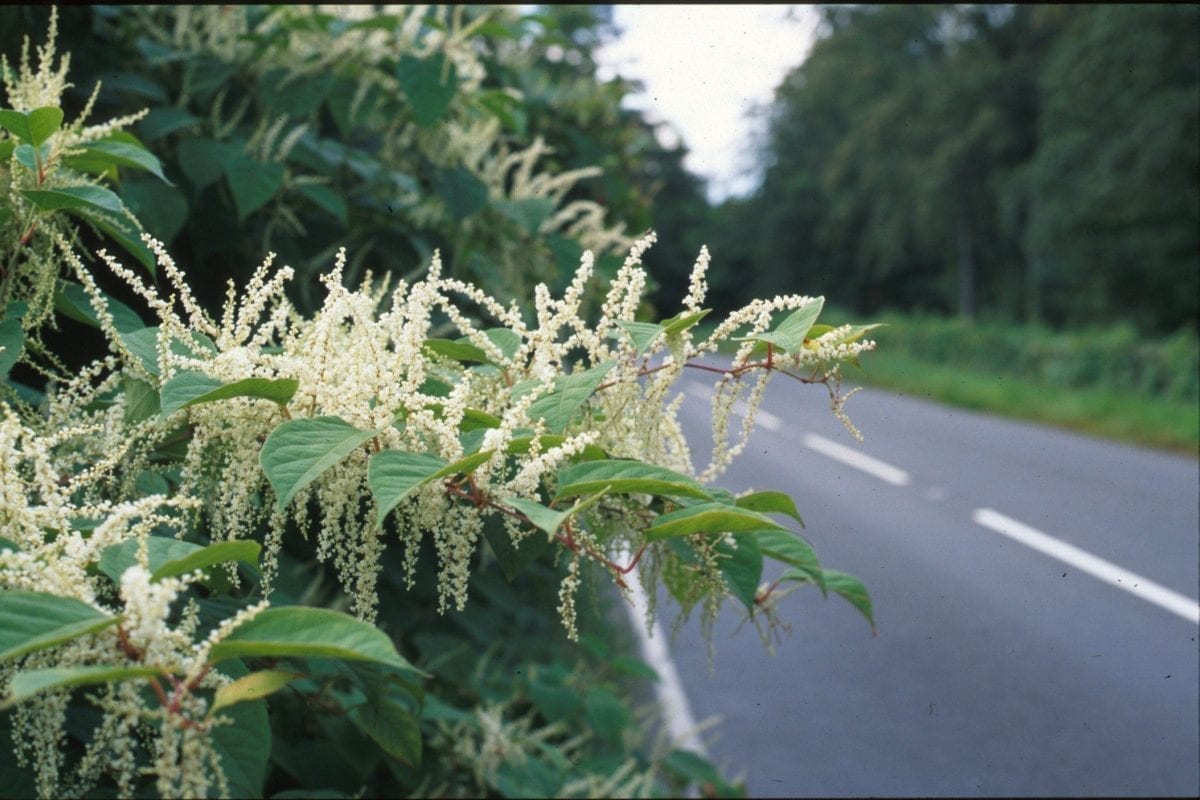 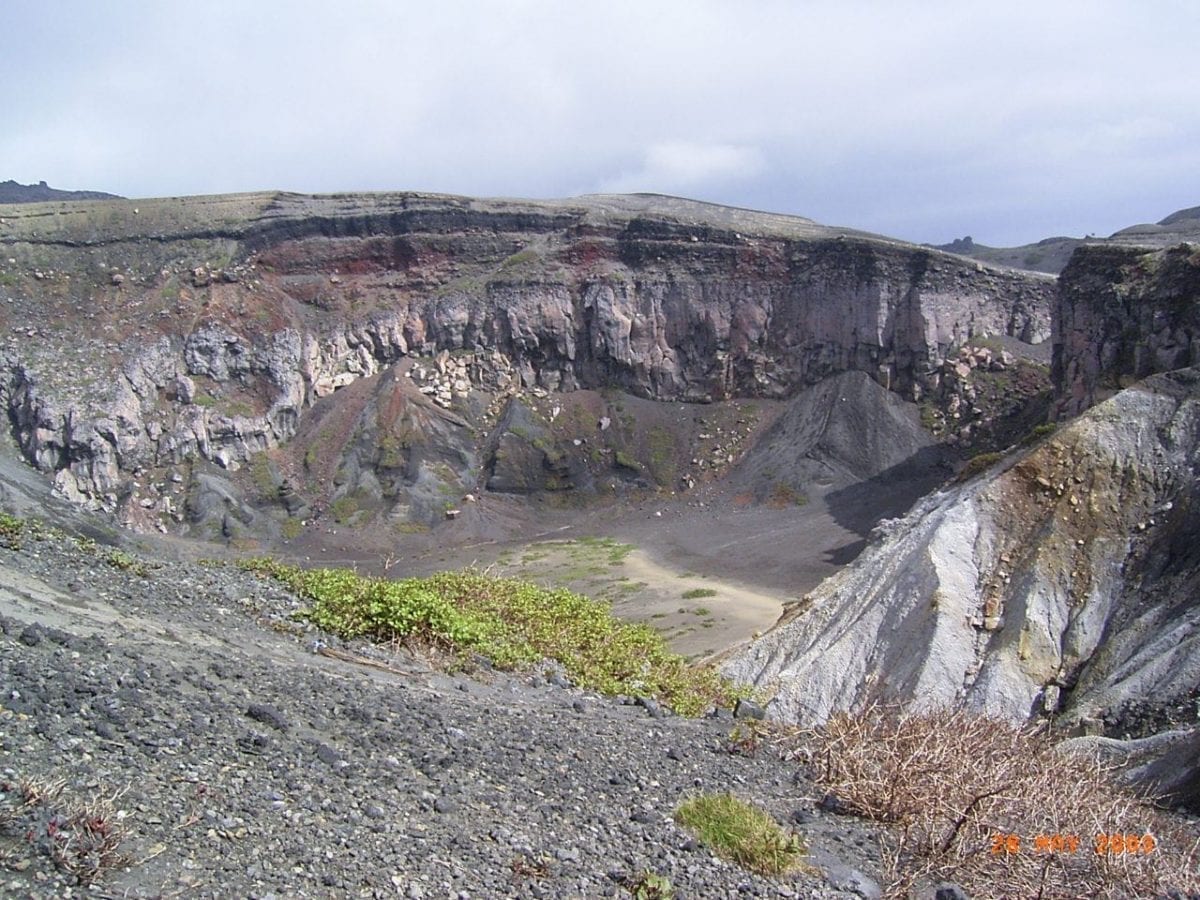 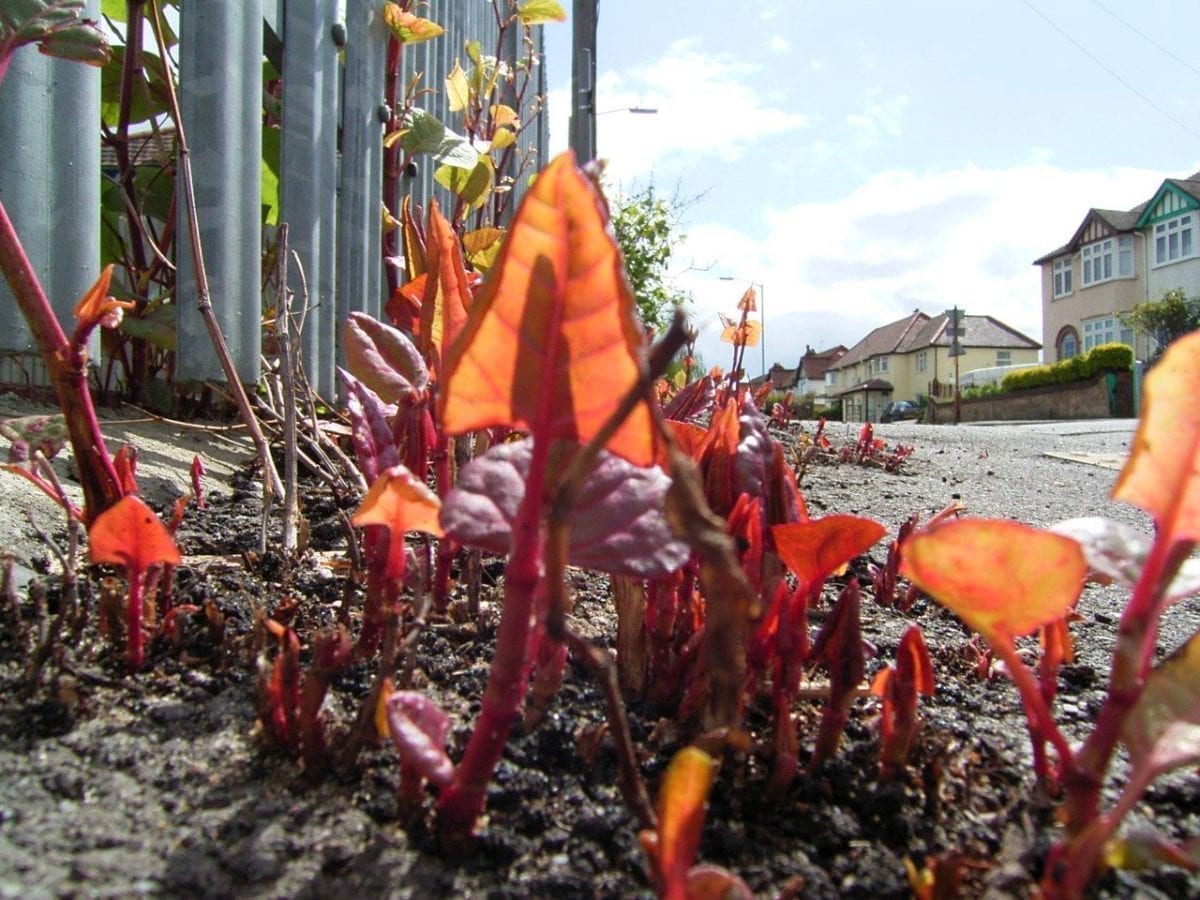 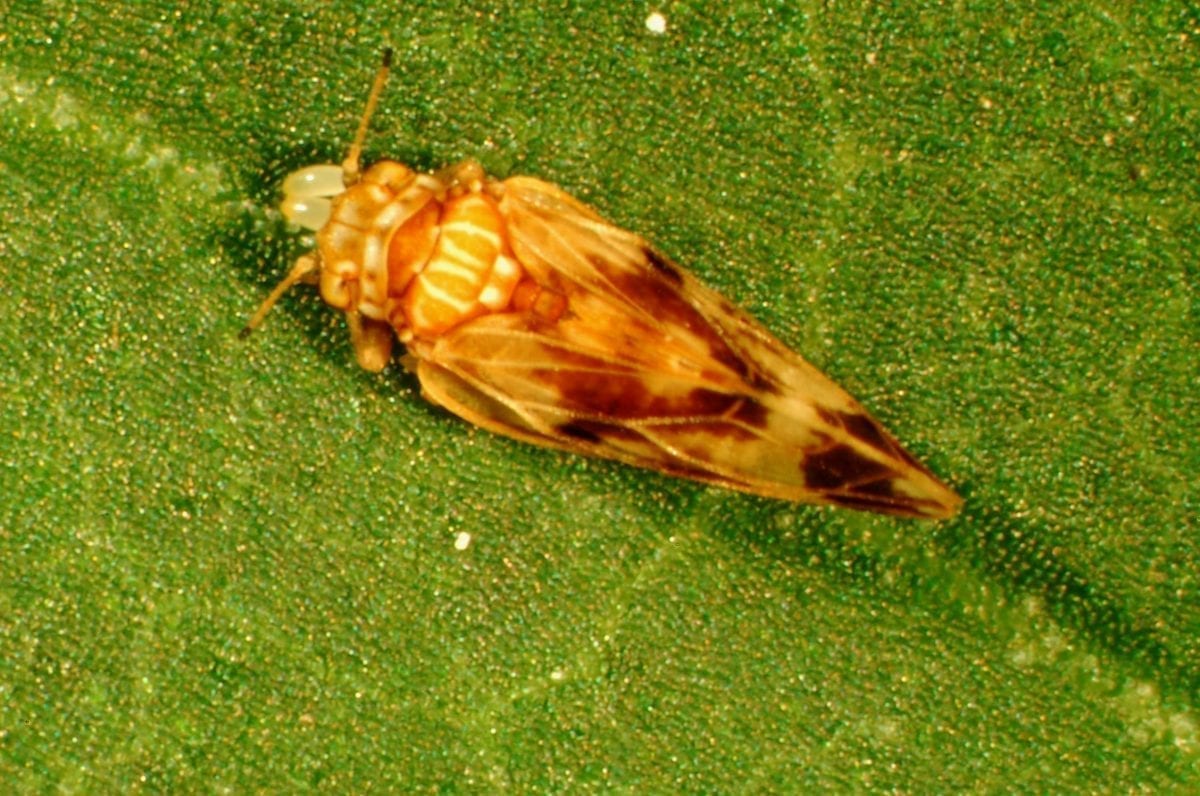 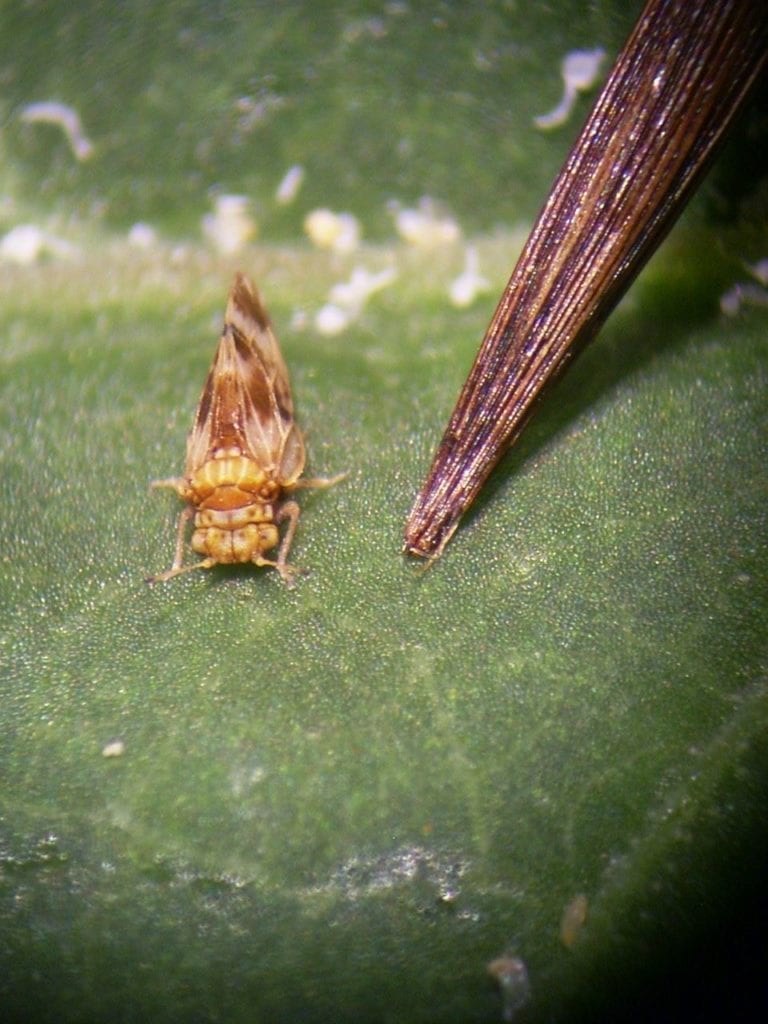 Japanese knotweed (Fallopia japonica) is one of the most damaging invasive weeds in the UK, Europe and North America. Growing up to a metre a month, it is a problem to the construction industry whilst also out-competing native vegetation. Since it was introduced as a prized ornamental from Japan in the mid-19th century, the species has become problematic in its entire exotic range where it has established.

In its native Asian range, this plant species evolved with more than one specialized natural enemy – from fungal diseases to insects – which help to control its growth and spread. In Europe, USA and Canada however, none of these natural enemies are present, meaning this non-native invasive knotweed is literally out of control.

Total costs for Japanese knotweed to the British economy is around £165.6 million per year. Currently, the weed can be partially controlled using chemicals, however, given the rate at which the species spreads, conventional control methods are deemed unsustainable because they are costly and/or impractical. Classical biological control could offer a more economical, sustainable and environmentally-friendly approach.

CABI’s scientists have carried out extensive research into the biocontrol potential of an insect and a fungal pathogen since 2000 in the UK and USA, extending to Canada in 2007 and then to the Netherlands in 2019.

Field surveys revealed a number of possible natural agents associated to Japanese knotweed and from these, the Aphalara itadori psyllid (a small sap-sucking insect) and fungal leaf-spot pathogen, Mycosphaerella polygoni-cuspidati, were seen as having the highest potential as biocontrol agents.

CABI is working with the UK Government on the approved release of the specialist psyllid as a control agent for Japanese knotweed in the UK. The psyllid was approved for release in the UK in 2010 followed by mass releases during subsequent years. The releases are taking place in field trials at a number of sites in England and Wales. Part of the release protocol includes a monitoring plan, which aims to record the impact of the psyllid on Japanese knotweed, but also to detect any potential adverse effects on native plants and invertebrates.

Observations revealed that the psyllids collected from Mt. Aso, Kumamoto Prefecture, Japan, reproduced and survived over on Japanese knotweed at several release sites in the UK. However, long-term establishment and persistent overwintering have proved challenging.

Research in Canada assessed the suitability of the agents for this geographic region. Research for British Columbia’s Ministry of Forests, Lands and Natural Resource Operations, as well as for the USA in partnership with the United States Department of Agriculture (USDA), has been running in parallel. The psyllid was released in Canada in 2014 and in the USA in 2021. The spread and impact will be closely monitored.

Murakami psyllid In 2019, a survey was carried out in Japan to collect better climatically-matched psyllids. Extensive and severe leaf curling damage, attributed to psyllids, was found at Murakami in the Niigata Prefecture and will continue to be investigated. The Murakami psyllid was released in 2020 in the Netherlands after approval for release by Dutch authorities. The psyllid was also released in the UK and Canada in 2021 – its spread and impact are being closely monitored.

Further information on CABI’s work on Japanese knotweed can be found here. 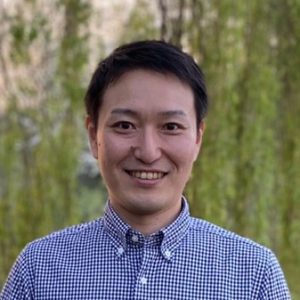 Japanese knotweed is a highly invasive weed that impacts severely on native biodiversity and local infrastructure in its introduced range. Whilst chemicals are currently used to control the weed, this approach is costly and unsustainable. Biological control is an alternative method. The damaging leaf-spot fungus, Mycosphaerella polygoni-cuspidati, which attacks the plant in its native range was found not to be suitable as a classical biocontrol agent. However, the pathogen is considered to hold potential as a mycoherbicide. The aim of this project is to undertake proof-of-concept research into a potential mycoherbicide, in collaboration with the private industry.