You are here: Home / Projects / Biological control of parrot feather in North America

Parrot feather, Myriophyllum aquaticum, is a very popular garden and ornamental plant and has a long history of invasion worldwide. It was first recorded in Canada in 1980 from British Columbia and has since been recorded in the Lower Mainland and in the USA. Parrot feather forms dense impenetrable mats which affect stream flow, resulting in reduced native species’ richness at local scales, reduced water quality and habitat quality for fish and wildlife, and impacts on human activities. Due to the negative impacts, management of this species is required and a sustainable option is biological control. A biological control programme against parrot feather is already well-developed in South Africa and this project aims to investigate the potential for use in Canada. 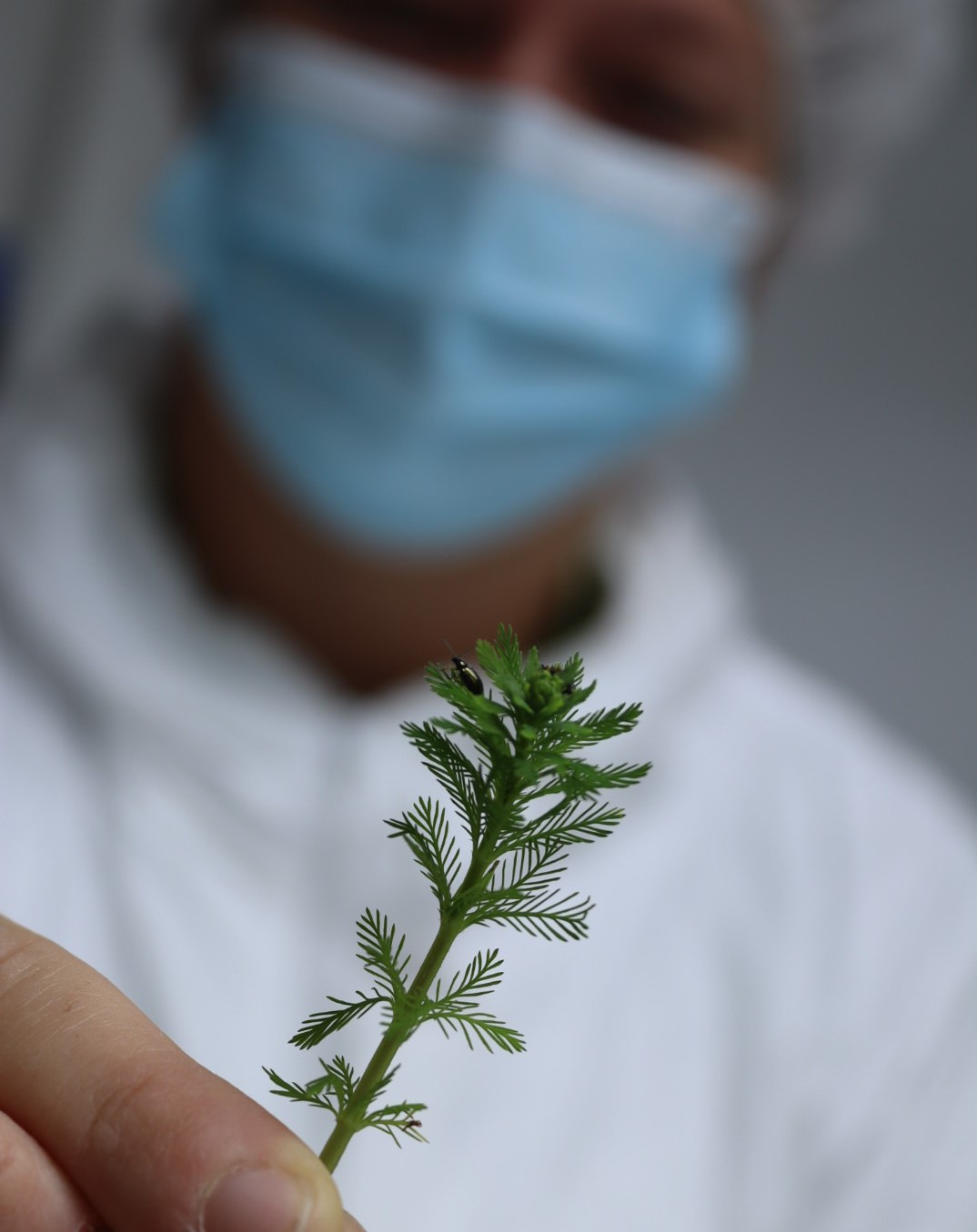 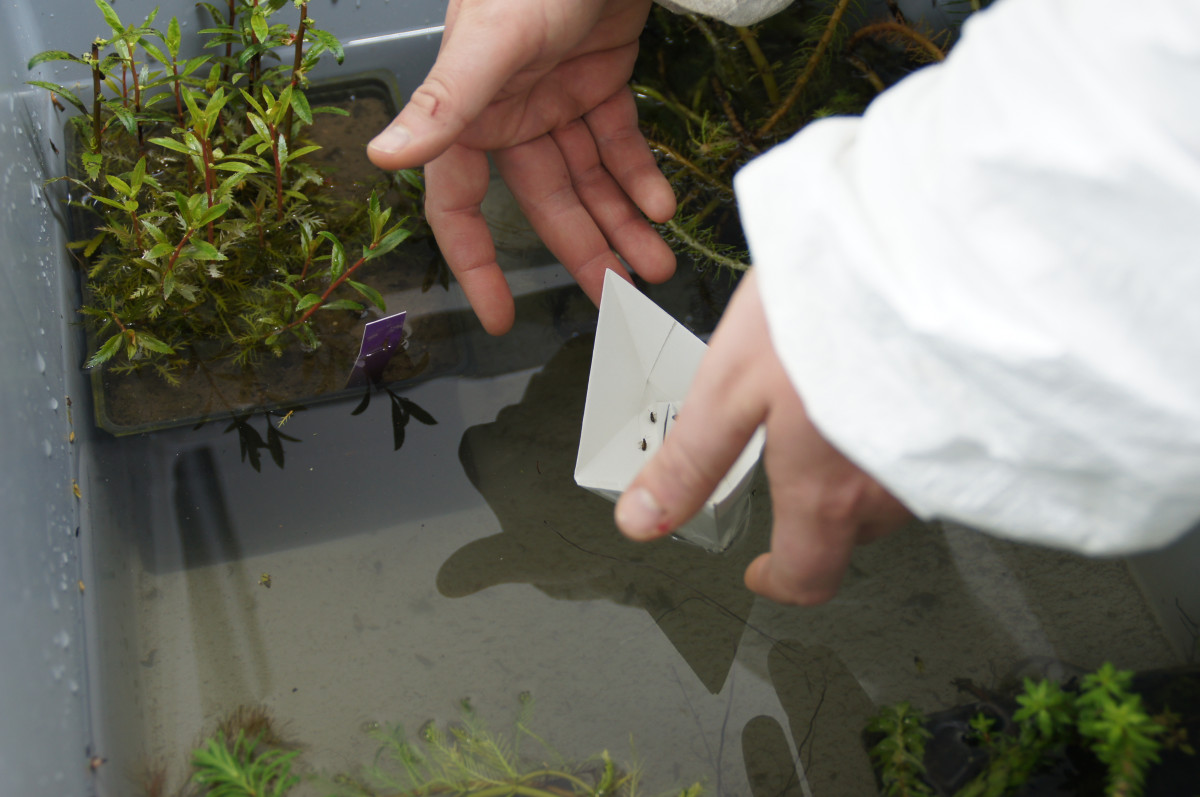 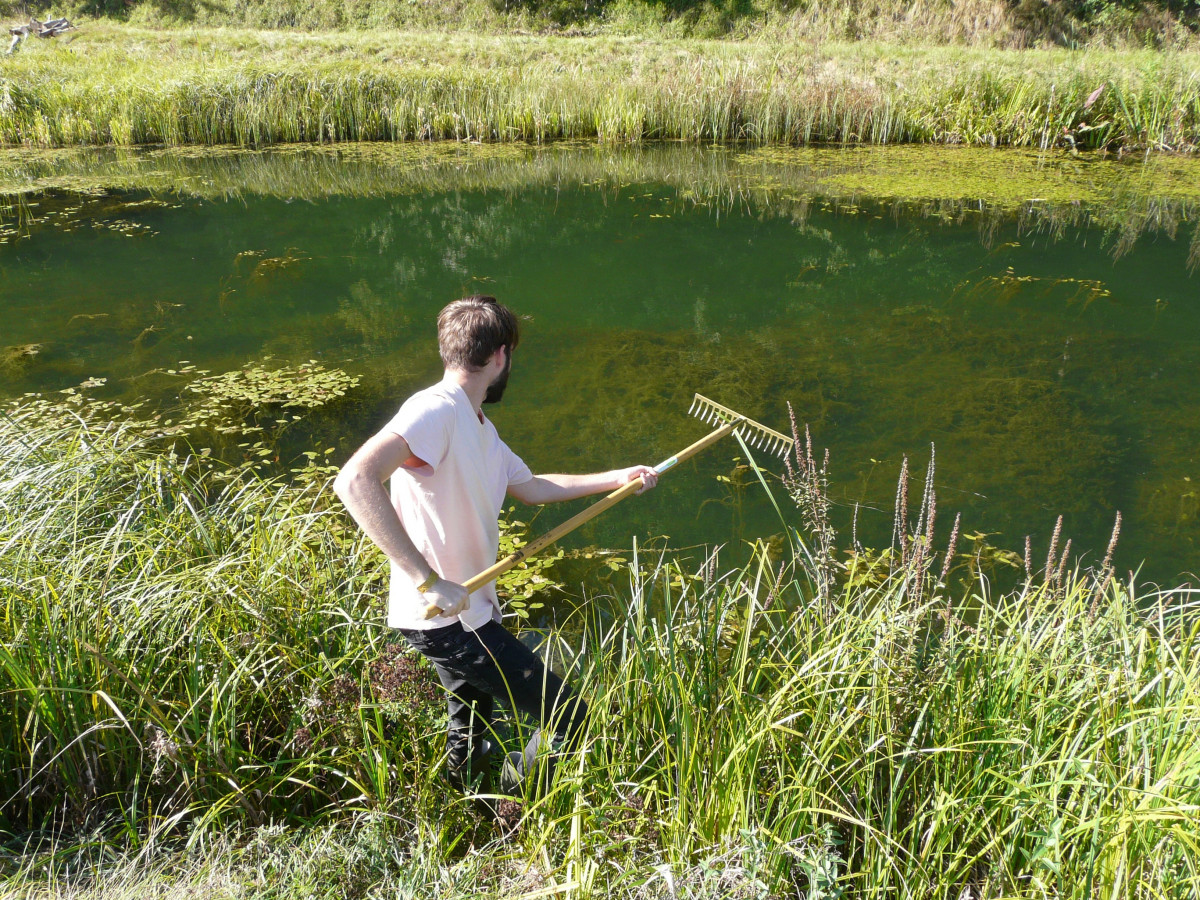 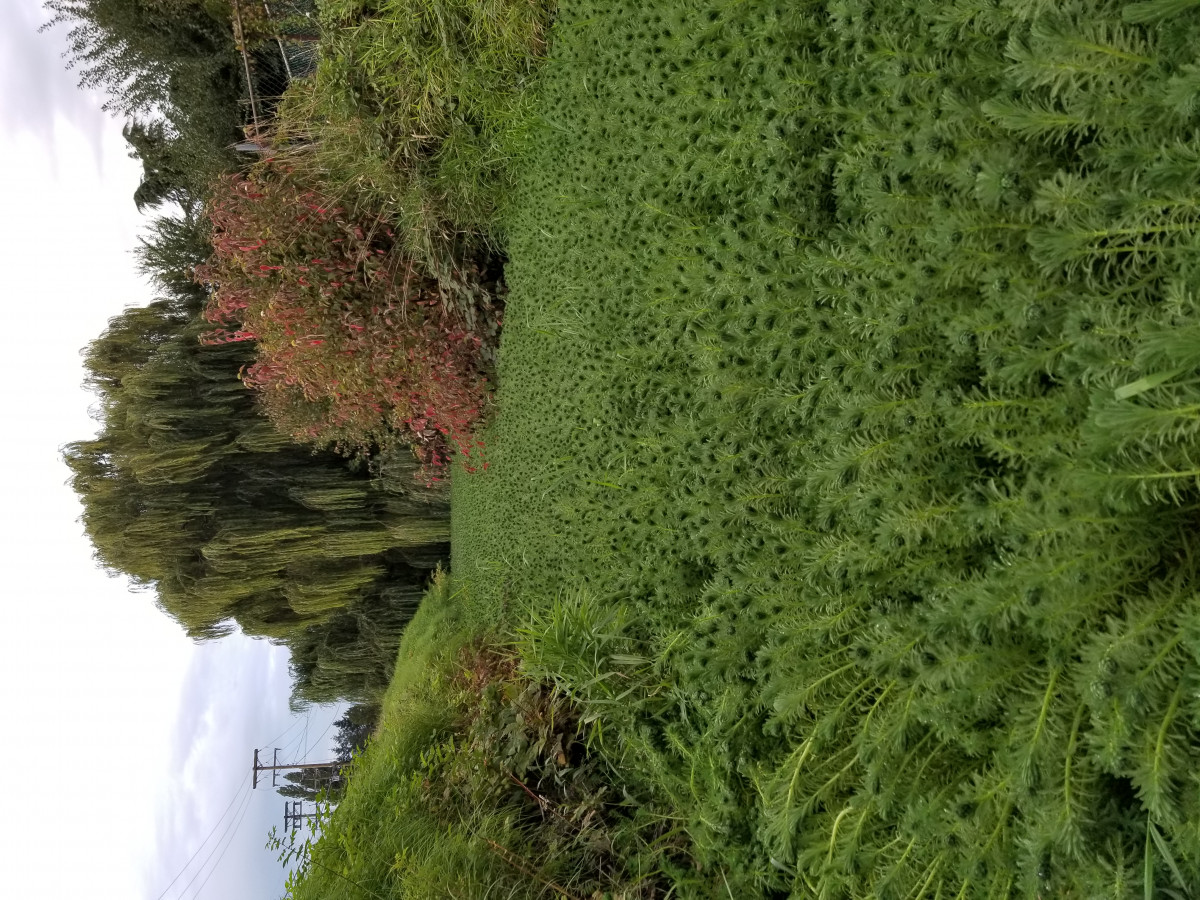 The invasion of parrot feather in drainage, ditches, canals and rivers in British Columbia. Credit: David Ensing, AAFC
Previous Next

Parrot feather is a noxious weed which has invaded the Lower Mainland and Vancouver Island, British Columbia and extended into the western USA, including Washington, Oregon, Idaho and California. In the invaded range, parrot feather has the ability to form dense impenetrable mats which affect stream flow, reduce native species’ richness, reduce water quality and habitat quality for fish and wildlife, and negatively impact human activities. In North America, it is considered a serious weed in shallow streams, irrigation ditches, ponds and shallow lakes. In urban settings, it significantly increases the risk of flooding when it invades canals, ditches and storm drains that would typically divert flood waters.

Once established, this plant is extremely difficult to control. Any mechanical method can fragment plants, favouring the growth and spread of this species. In addition, herbicides have been difficult to employ due to restrictions in use in sensitive wetland habitats and the fact that the plant has an emergent and submerged form.

Biological control of this species was implemented in South Africa in the early 1990s with the release of the leaf-feeding flea beetle, Lysathia sp. which proved to be extremely effective and no additional agents were required. Despite this success, no other country has implemented biological control against this weed.

Since 2020, CABI Switzerland, in collaboration with the British Columbia Ministry of Forests, Land, Natural Resource Operations, and Rural Development, initiated a project to evaluate the potential for biological control of parrot feather in Canada, specifically the Lower Mainland.

There are three potential biological control agents that are worth further investigation: the leaf-feeding flea beetle, Lysathia sp. and the stem-mining weevil, Listronotus marginicollis are species native to South America and have been developed as part of the biological control programme for parrot feather in South Africa. The third, a North American native weevil Phytobius vestitus, was recently identified in Louisiana damaging parrot feather to the extent that it was managing parrot feather in certain locations. This project aims to evaluate these agents.

All three agents have the potential to be effective and safe biological control agents. However, before any agent can be considered for safe release in western North America, host-range testing of plant species, relevant to the region, will need to be conducted.

Climate is considered a potential limiting factor, however, preliminary Climex models provided a moderate fit to some sites where both Lysathia sp. and L. marginicollis occur. Nevertheless, it needs to be kept in mind that Vancouver has longer winters than those experienced in South Africa and Argentina. In addition to the host range testing, this project will explore the potential climatic compatibility of these agents to Canada which will give insights into the efficacy of the agents.

In September 2021, we were able to import Lysathia sp. into the CABI quarantine in Switzerland which were obtained from the Centre of Biological Control in South Africa.

The rearing of this agent is ongoing and we have been able to initiate host range testing. Since obtaining the beetles, we have been able to test both the adults and larvae against five test plant species within the Haloragaceae. The preliminary results are promising, however, there are many more plant species to test, especially species occurring in North America. Given climate is a potential limiting factor, we plan to conduct some thermal physiology studies with Lysathia sp. to determine the likelihood of success if it were to be released in Canada. In addition, we plan to import at least one of the weevils, either L. marginicollis or P. vestitus for further testing against species within the Haloragaceae. 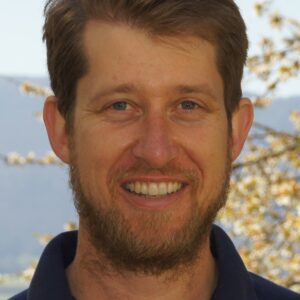 A guide to isolating pathogens with Dr Phil Taylor

Trade in seed brought crops to new regions, but many weeds were spread by this route too. Whitetops, also known as hoary cresses, arrived in the USA as contaminants of seed from Eurasia. They are now aggressive invaders of crops, rangeland and riverbanks. One reason for this is the absence of the natural enemies that keep them in check in their area of origin. CABI staff in Switzerland are looking into the prospects for biological control of these invasive plants. 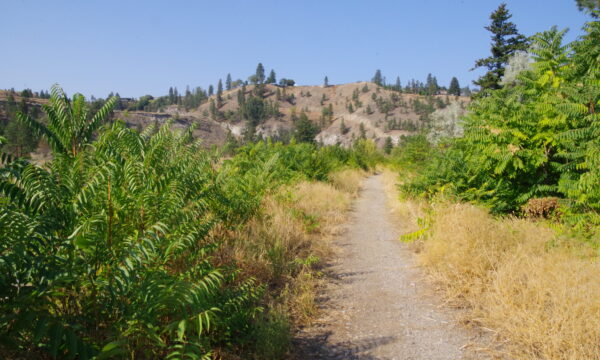 Biological control of tree of heaven 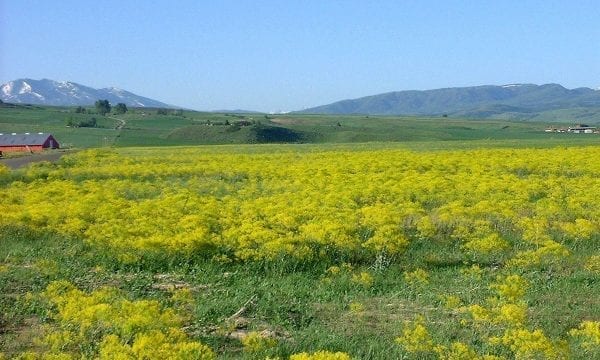 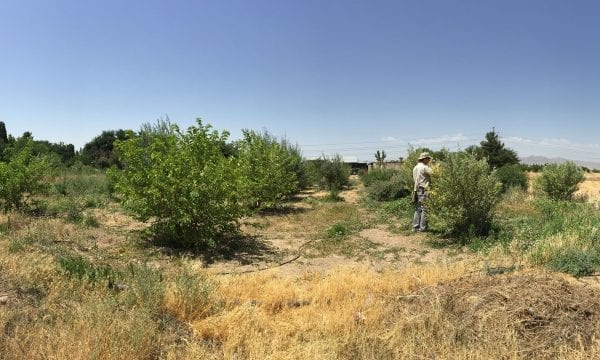 Stemming the spread of Russian olive 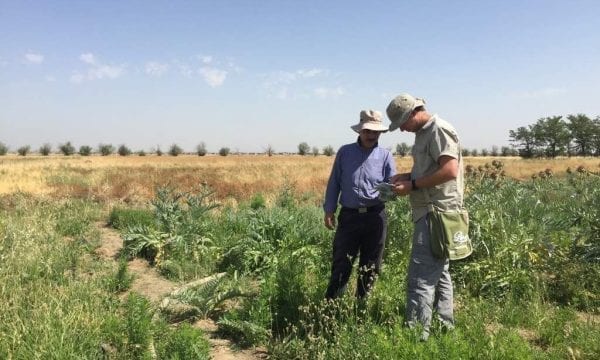