One of the UK’s most invasive plants, the fairy fern or floating water fern causes problems for anglers and water managers. It forms thick mats on the water’s surface which can double in size in a few days, blocking out light and killing aquatic flora and fish. Fragmentation of the fronds makes control by mechanical means virtually impossible. This project involves researching and testing the use of a 2mm-long North American weevil Stenopelmus rufinasus as an agent to control the weed naturally. 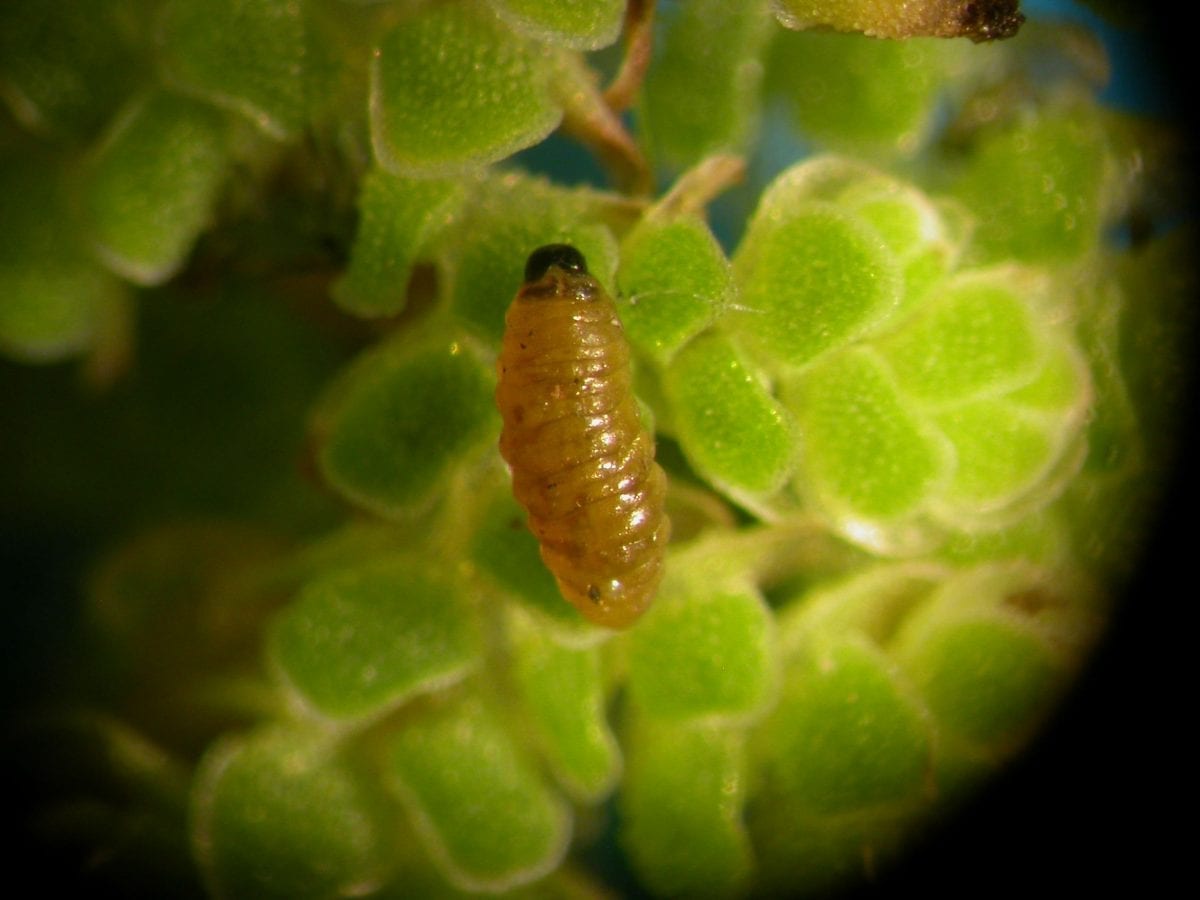 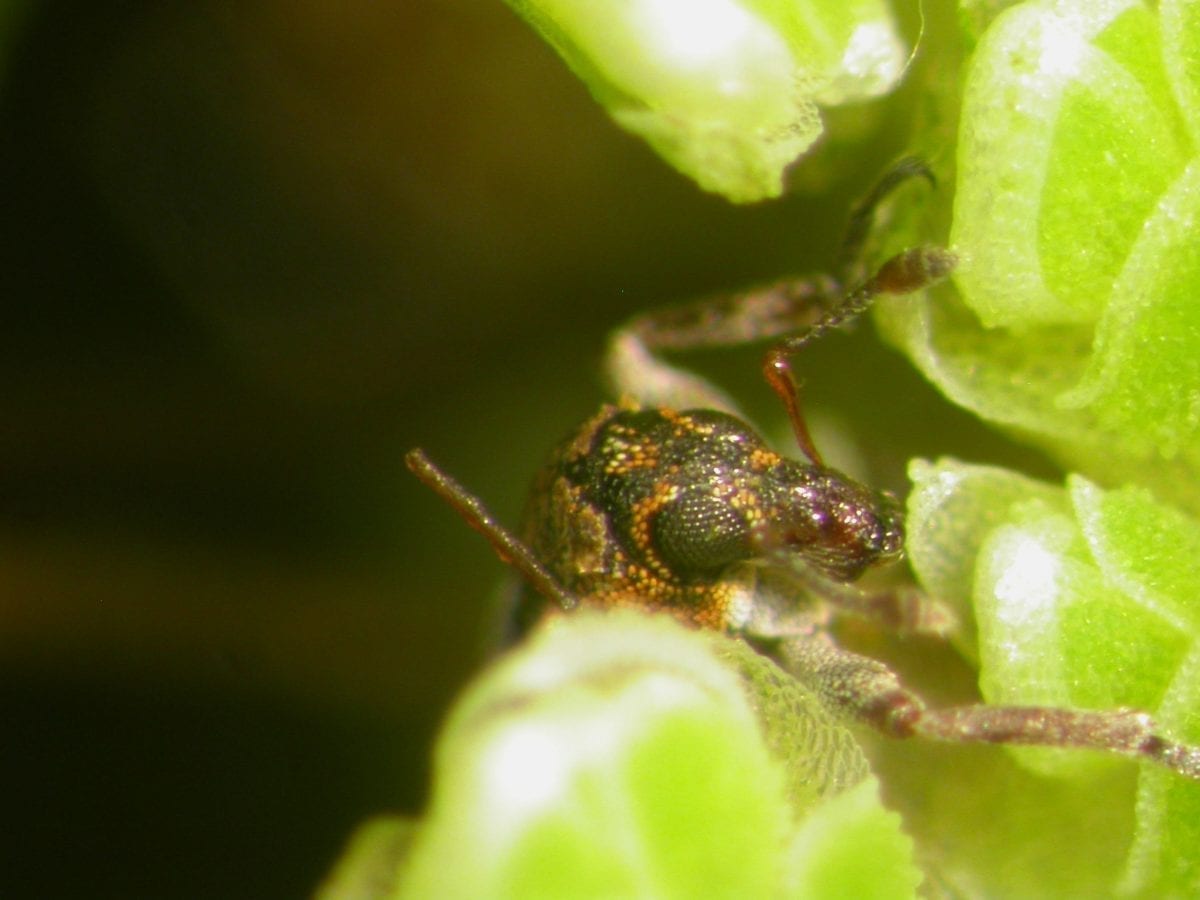 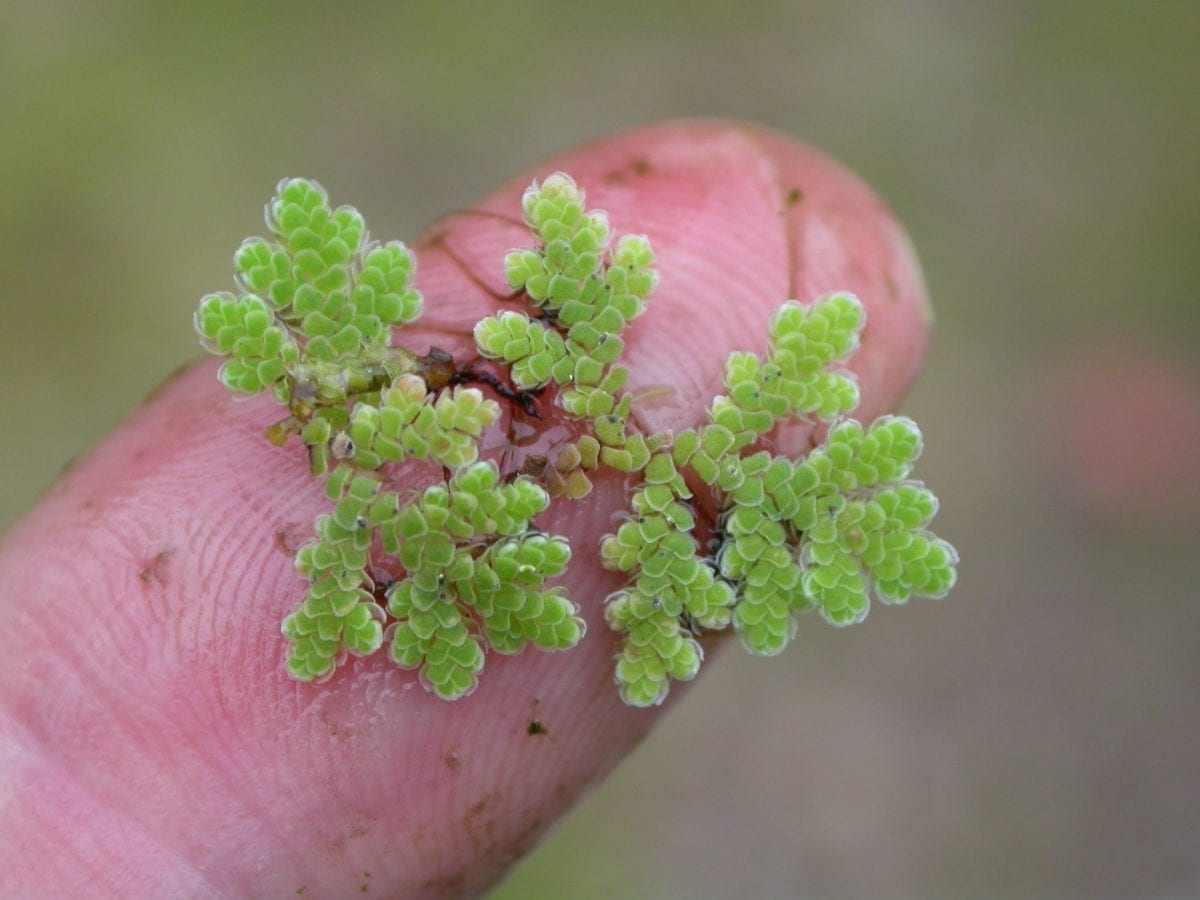 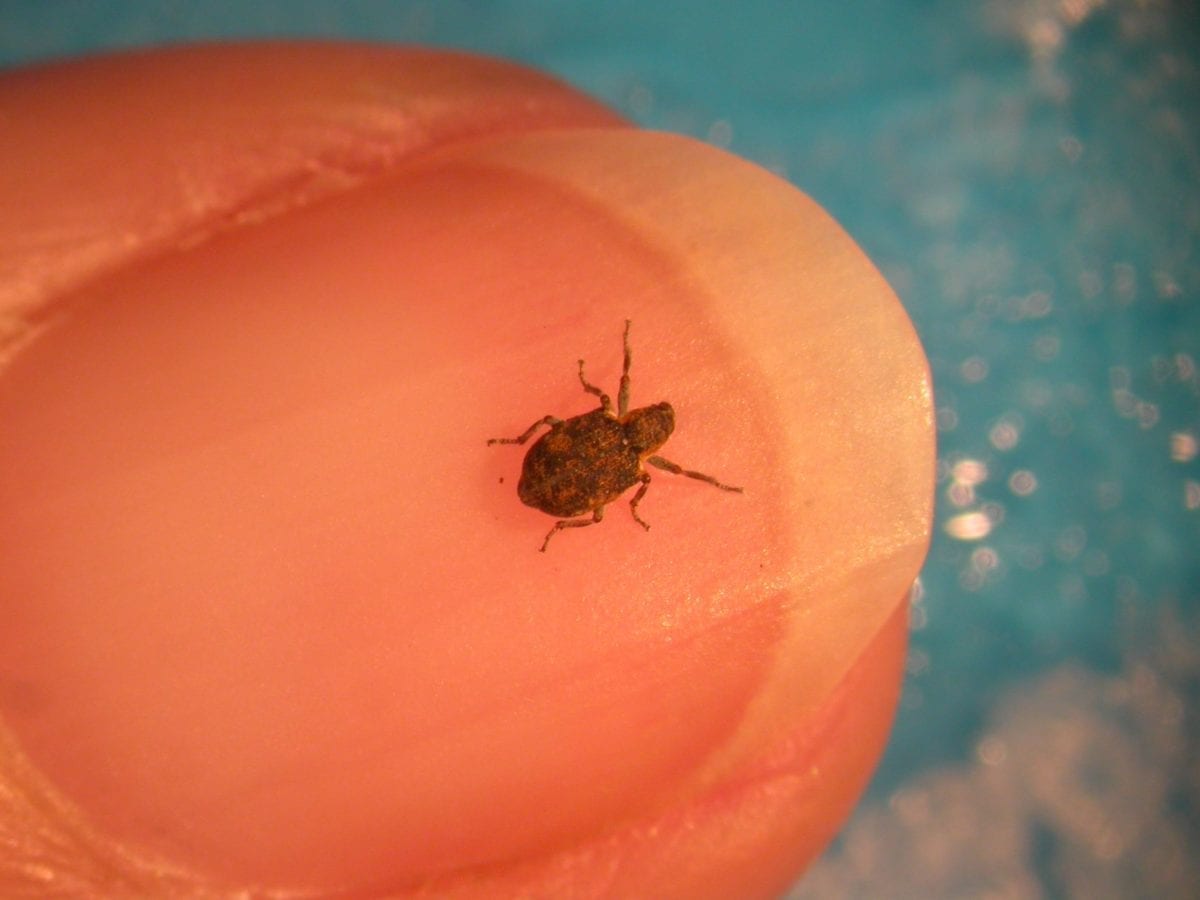 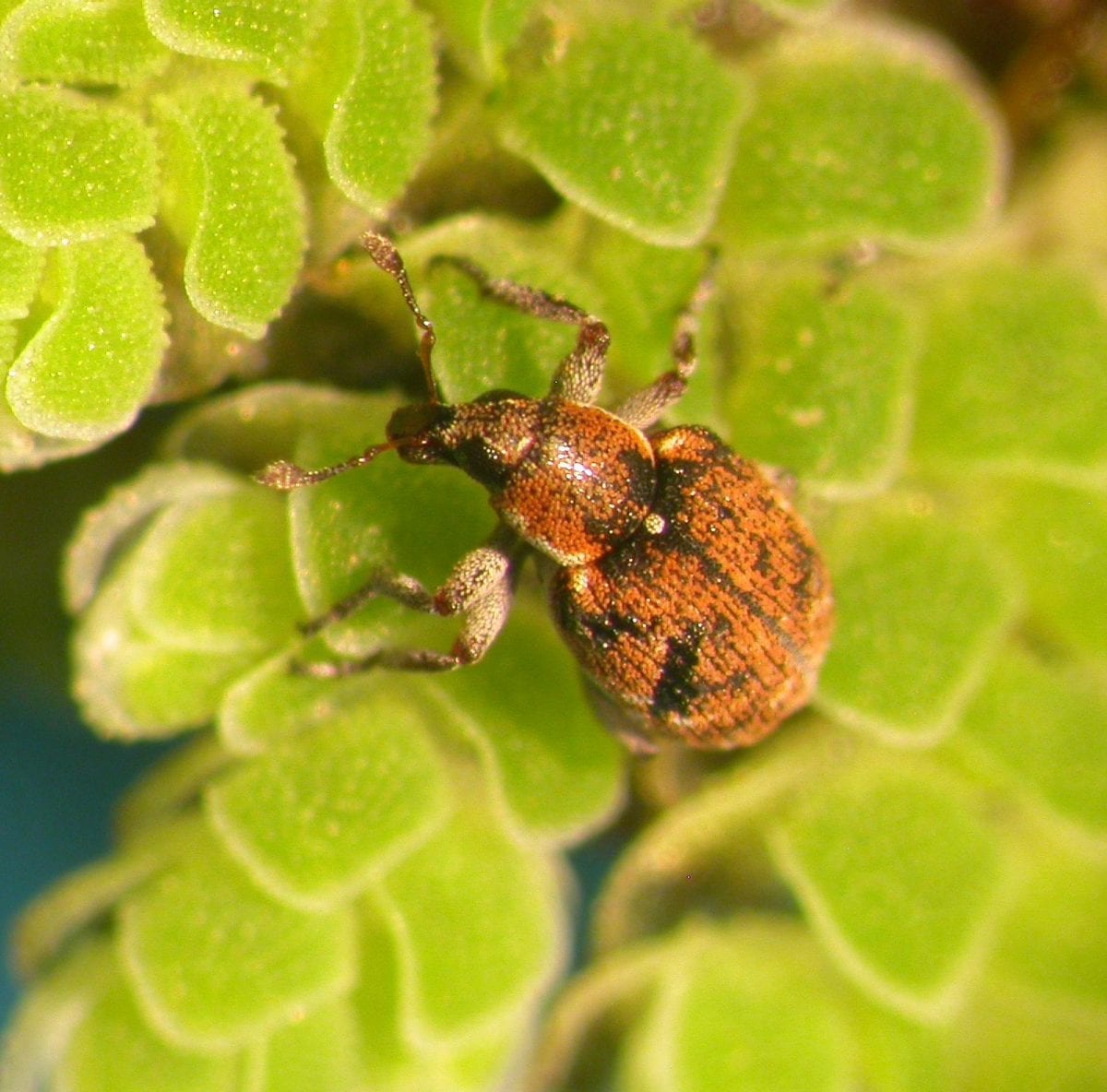 The fairy fern or floating water fern (Azolla filiculoides) is an aquatic plant with delicate fern-like foliage. The plant originates in the Americas, but was introduced into the UK in around 1840 as an ornamental garden aquatic. The plant soon escaped the confines of ponds and into the wider environment where it now causes considerable problems to anglers and Water Managers.

Azolla is one of the most invasive plants in the UK today. It has a remarkable ability to multiply, with fronds that grow rapidly, elongating until finally fragments break off to form new plants.

The mats that form on the surface of the water which can be 30cm thick. During hot weather, mats can double in size in just four or five days. These: block out light, killing our rich and diverse aquatic flora, impede flood defences and water-based recreation, such as boating and angling, and reduce oxygen availability, which can lead to the death of fish and invertebrates. It can also cause livestock deaths when animals mistake water for land.

Azolla is a major problem on ponds, lakes, rivers and canals throughout the UK, including areas of conservation importance such as Sites of Special Scientific Interest (SSSI). But, despite recent warnings about Azollas’ ‘weedy’ tendencies and a Royal Horticultural Society ban at its flower shows, it continues to be imported and sold by garden and aquatic centres around the country.

Fragmentation of the fronds makes control by mechanical means virtually impossible. This is compounded by the annual production of millions of tiny spores, which are released in autumn and grow into new plants the following year.

There is now only one group of herbicides licensed for use on UK waters. All use the active ingredient glyphosate which is a non-selective contact herbicide. Increasingly there is public pressure to find more selective and environment-friendly alternatives.

There are no organisms native to the UK that can control Azolla. However, research has shown the tiny 2mm long North American weevil Stenopelmus rufinasus to be one of the main natural enemies of Azolla sp. The weevil has been used to control the weed very successfully in the UK and South Africa, where after extensive host range testing, it was released as a biocontrol agent.

The weevil is already present in the UK (first recorded in 1921), most likely hitching a ride on Azolla plants imported by garden centres and aquarists. Because of its long occupancy, it is now considered by Defra (Department for Environment Food and Rural Affairs) to be ordinarily resident, with no licensing restrictions.

The weevils are excellent biocontrol agents for use in the UK because they can be targeted at specific sites where the weed is considered a problem. They are known to feed exclusively on species of Azolla, so are host-specific and won’t harm other plants but they can cause considerable damage to even large quantities of Azolla leading to eradication of the weed. Even large infestations were brought under control within the growing season, without the need for chemicals or further control measures. What’s more, the weevils can be bred in large numbers for bulk release.

CABI has a programme of rearing and supplying weevils for Azolla control to those who need it including water mangers at English Nature, British Waterways and the Environment agency. We can also supply weevils to the public if required. (see www.azollacontrol.com).

We are also conducting further research to improve our understanding of the weevils’ distribution, mobility, population development, survival requirements and potential as a natural control agent in the UK. 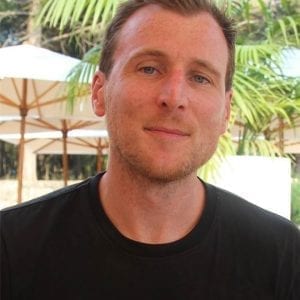 No donors
No partners