You are here: Home / CABI Publications / The apple snail, Pomacea canaliculata: an evidence note on invasiveness and potential economic impacts for East Africa

The South American freshwater apple snail, Pomacea canaliculata (Lamarck) has been introduced and become invasive in many parts of the world, causing significant economic losses in wetland rice cultivation, threatening biodiversity and impacting on human health. The confirmed report in 2020 of this snail species damaging rice crops in Mwea, the most important irrigation scheme in Kenya, represents a new introduction to continental Africa and brings into focus the need for a rapid and coordinated response to contain and mitigate the risk to other rice schemes, as well as neighbouring countries. This evidence note provides a review of the global invasive spread of P. canaliculata, its biology and ecological adaptability and assesses the risks and potential economic/yield losses for sub-Saharan African rice production over the next decade under different control scenarios. Given the strategic importance of rice production in the region, the potential impacts on food security and farmer income could be considerable. Monitoring, sustainable management and good agricultural practice recommendations are synthesized from established global resources and information is collated to support preparatory action and rapid response. Given the relatively localized distribution of the snail in Kenya, the implementation of a coordinated snail containment and eradication plan is urgently called for, underpinned by countrywide awareness raising, education and outreach to facilitate community-based vigilance and management. 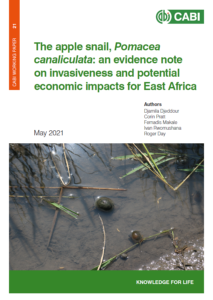