Despite the name, Canada thistle’s natural home is Eurasia. It has spread throughout the temperate world to become one of the worst weeds in rangeland and crops. One reason for this is the absence of the natural enemies that attack it in its area of origin. In North America six insect natural enemies have been introduced as biological control agents to try to control the weed but they have had little impact. CABI has been investigating whether disease-causing fungi might be the answer. 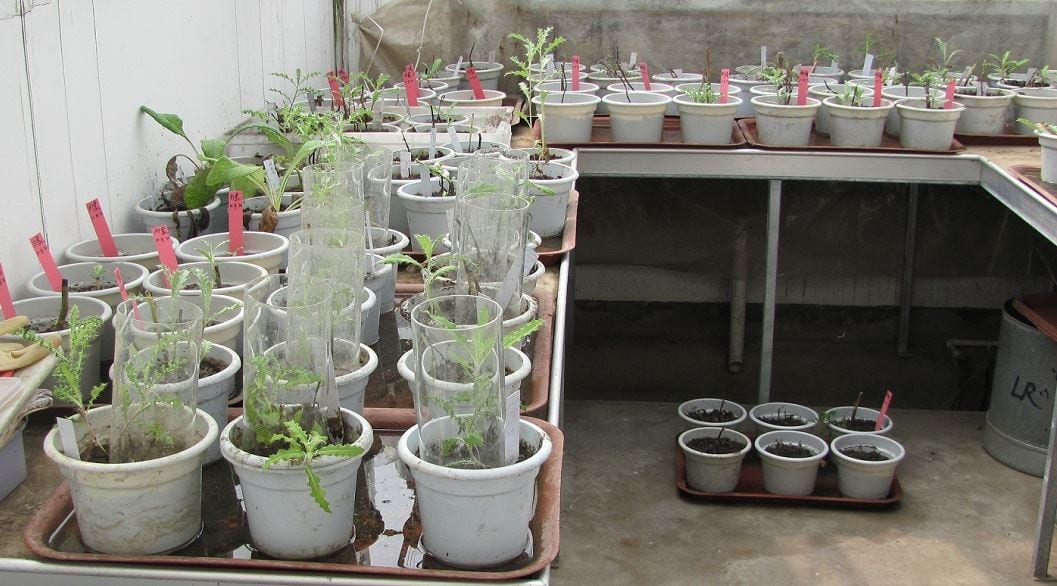 Test plants in the greenhouse for open-field test 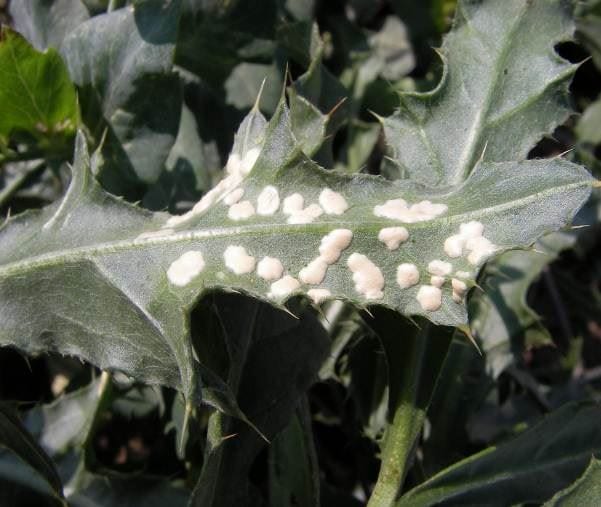 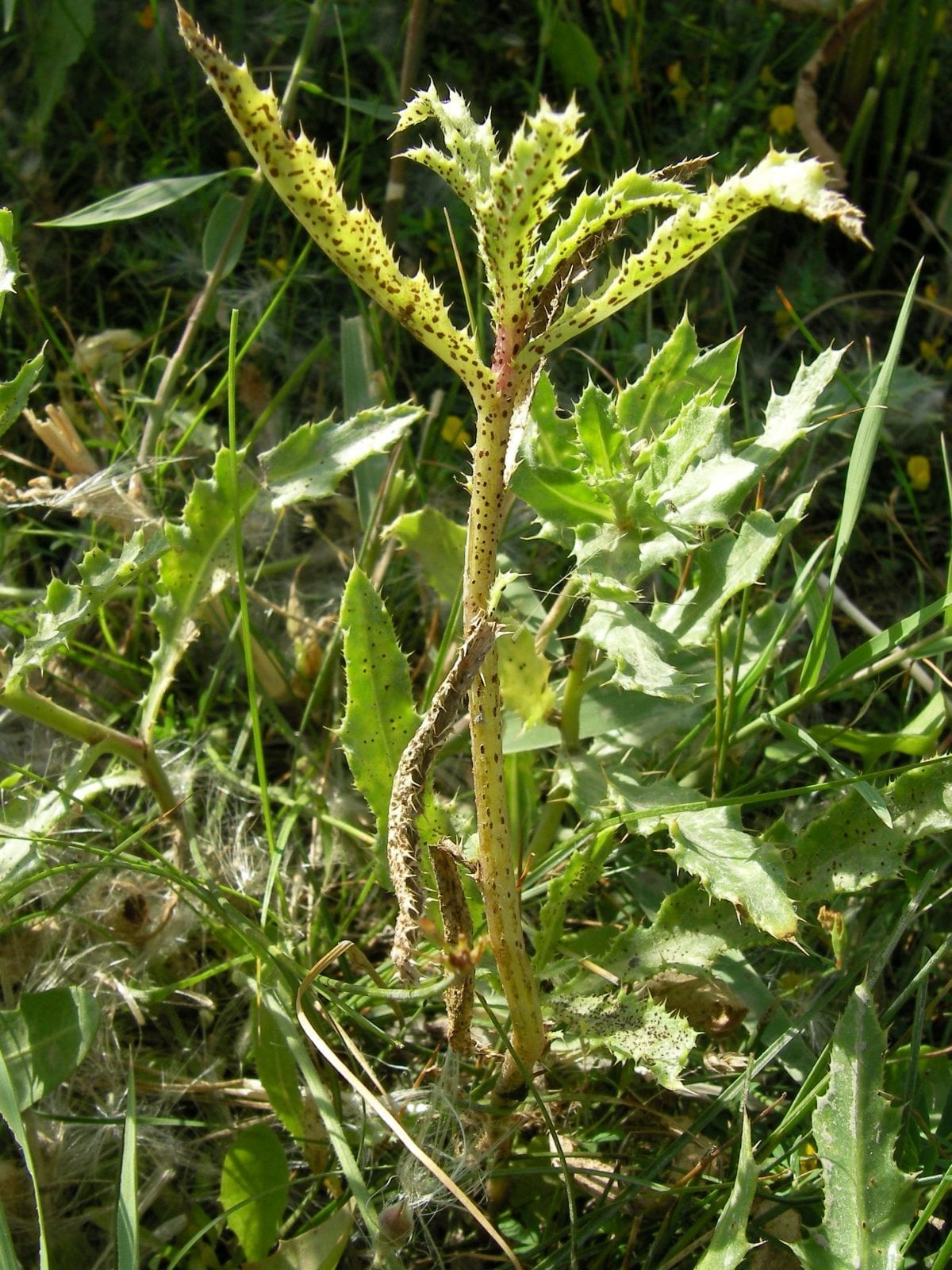 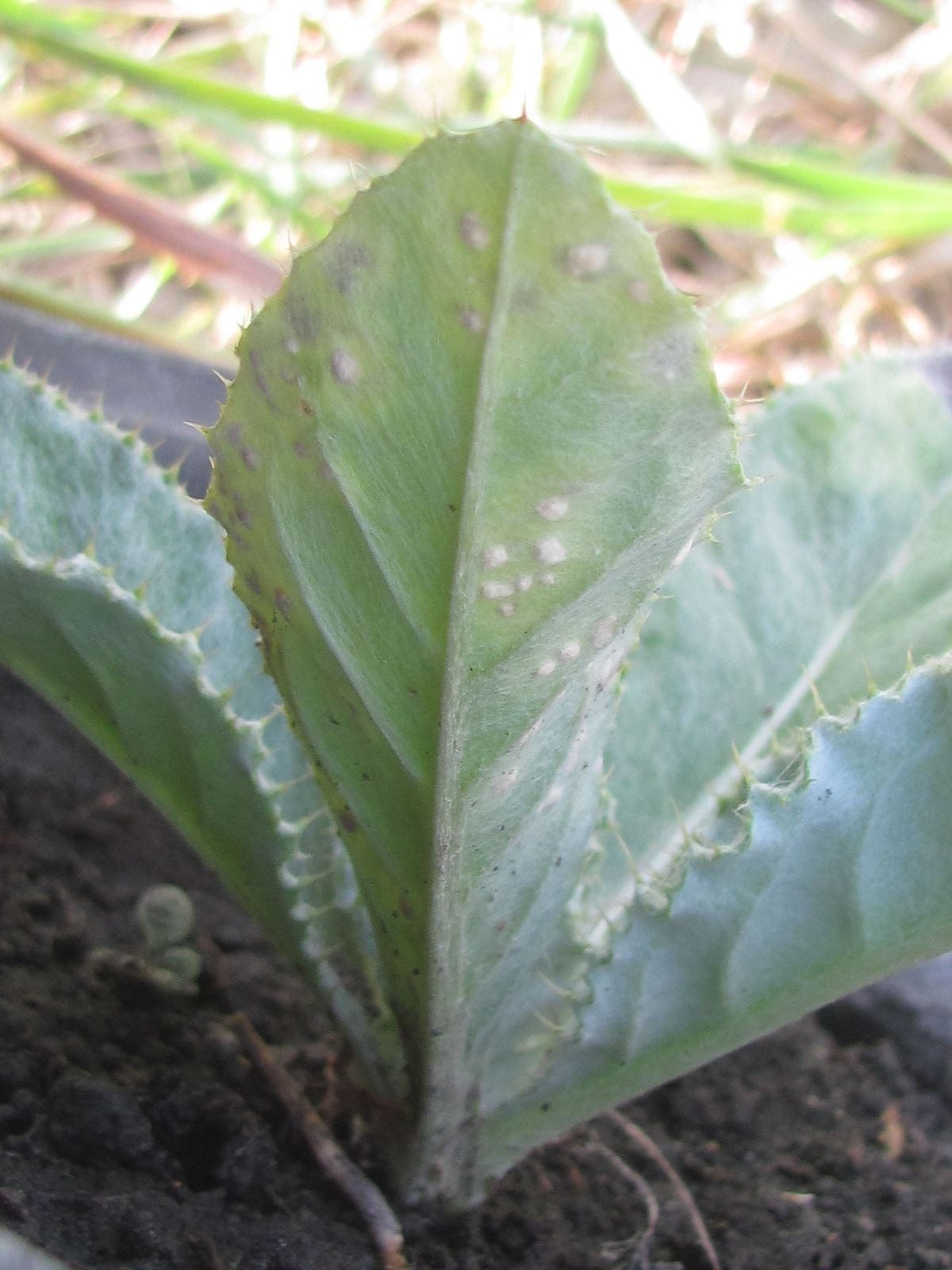 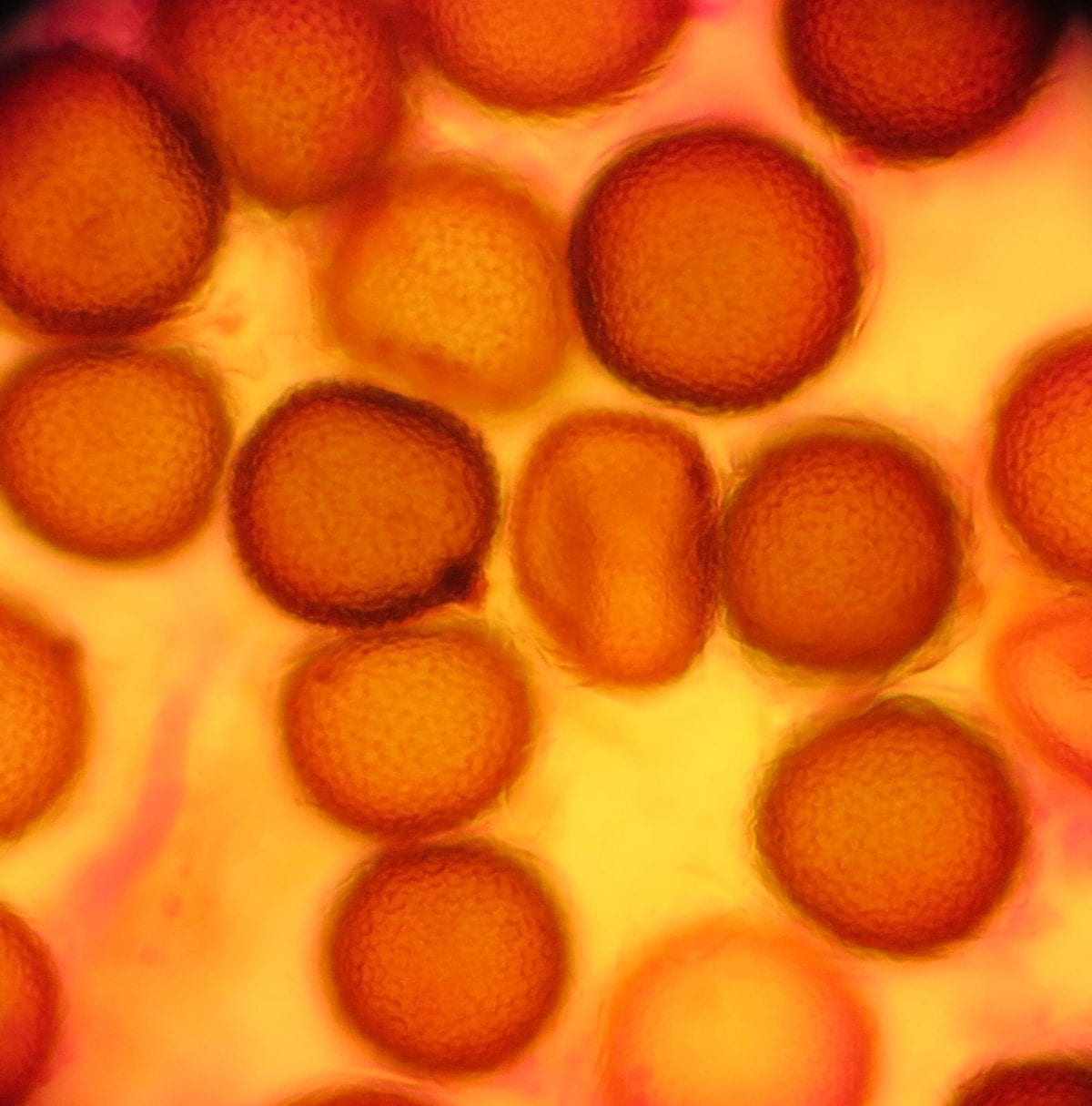 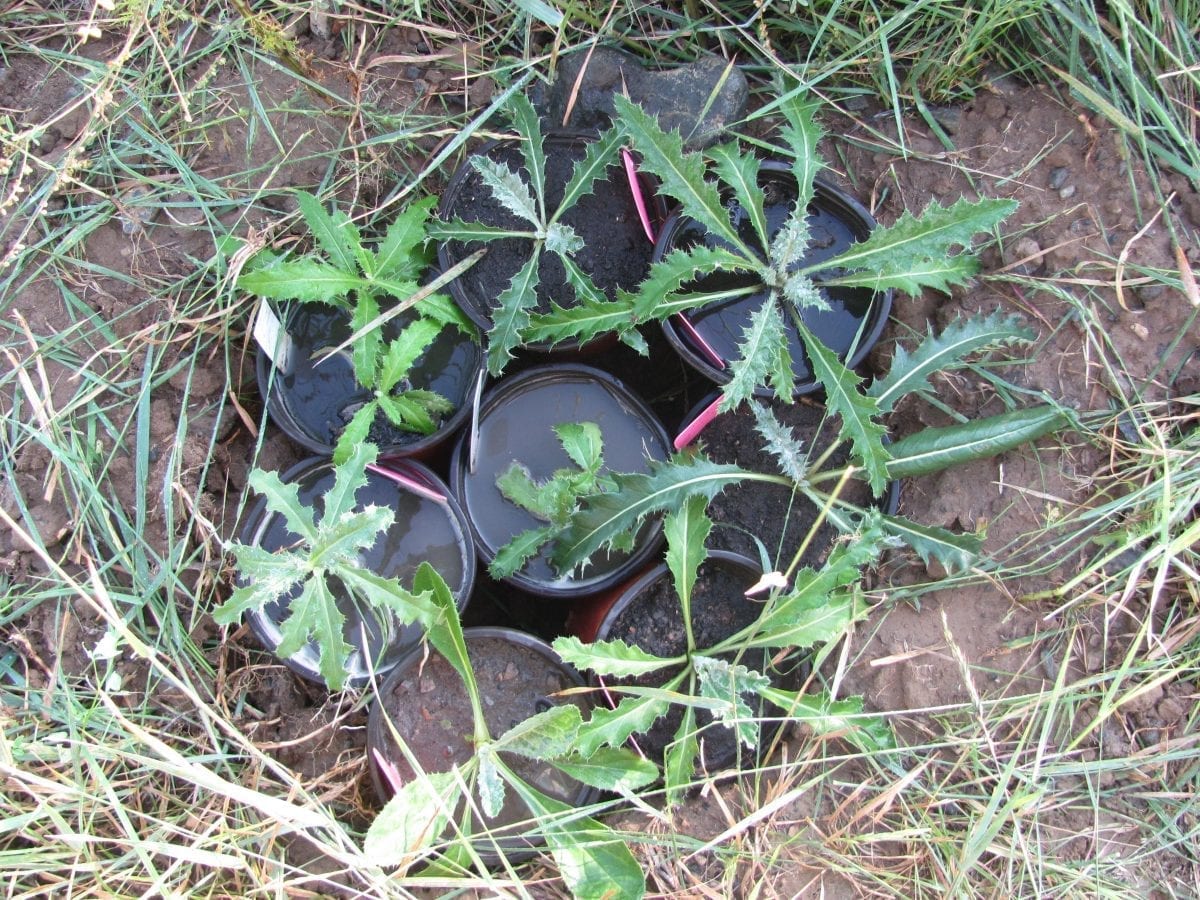 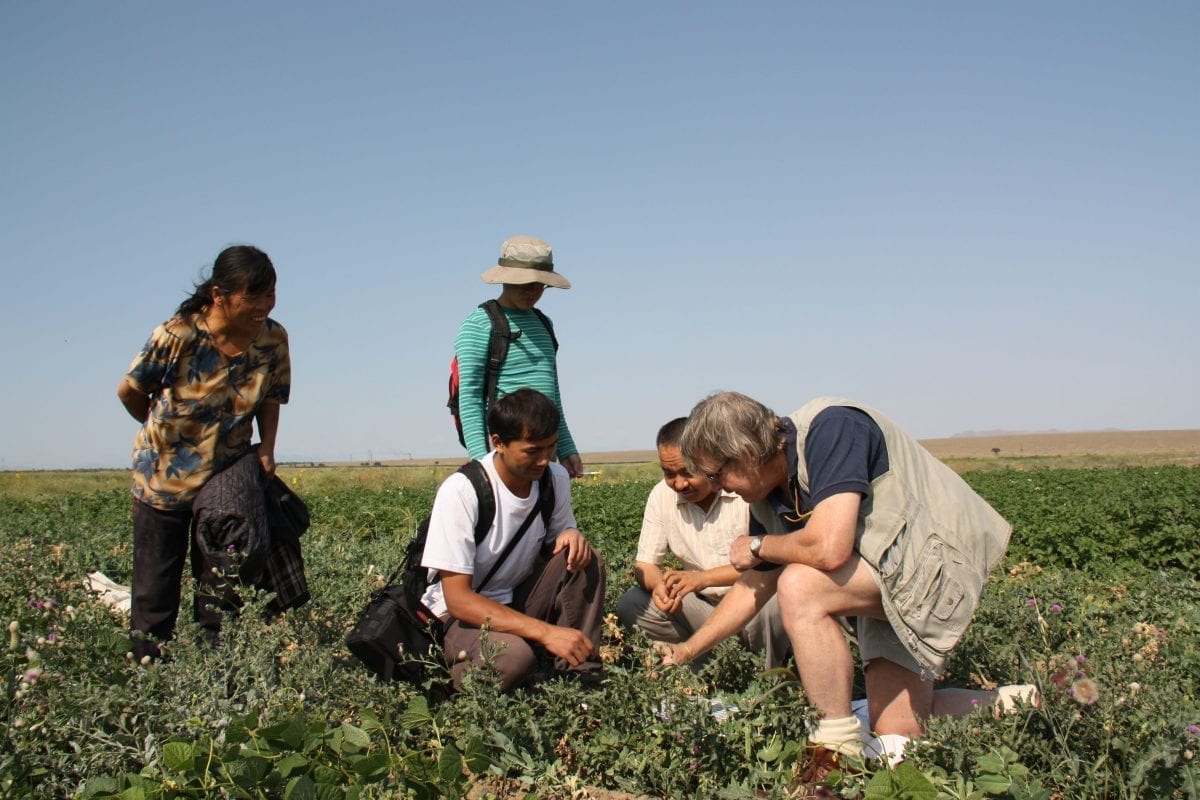 Searching for fungal pathogens on Canada thistle in China 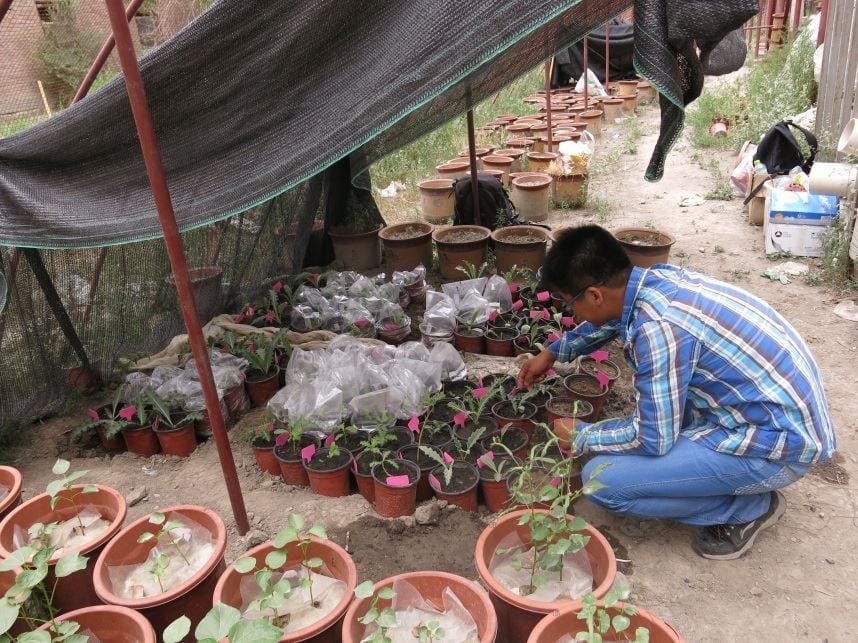 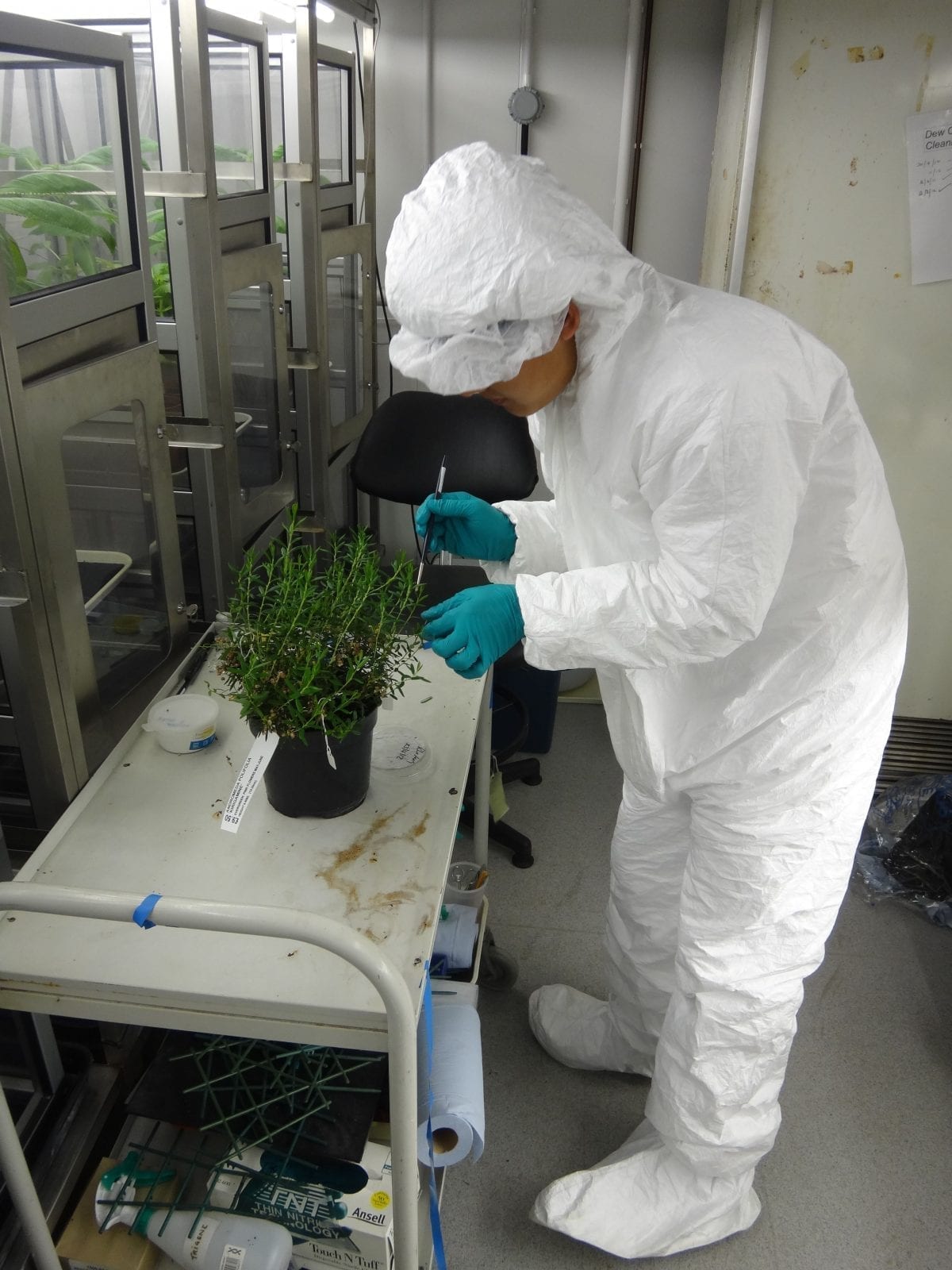 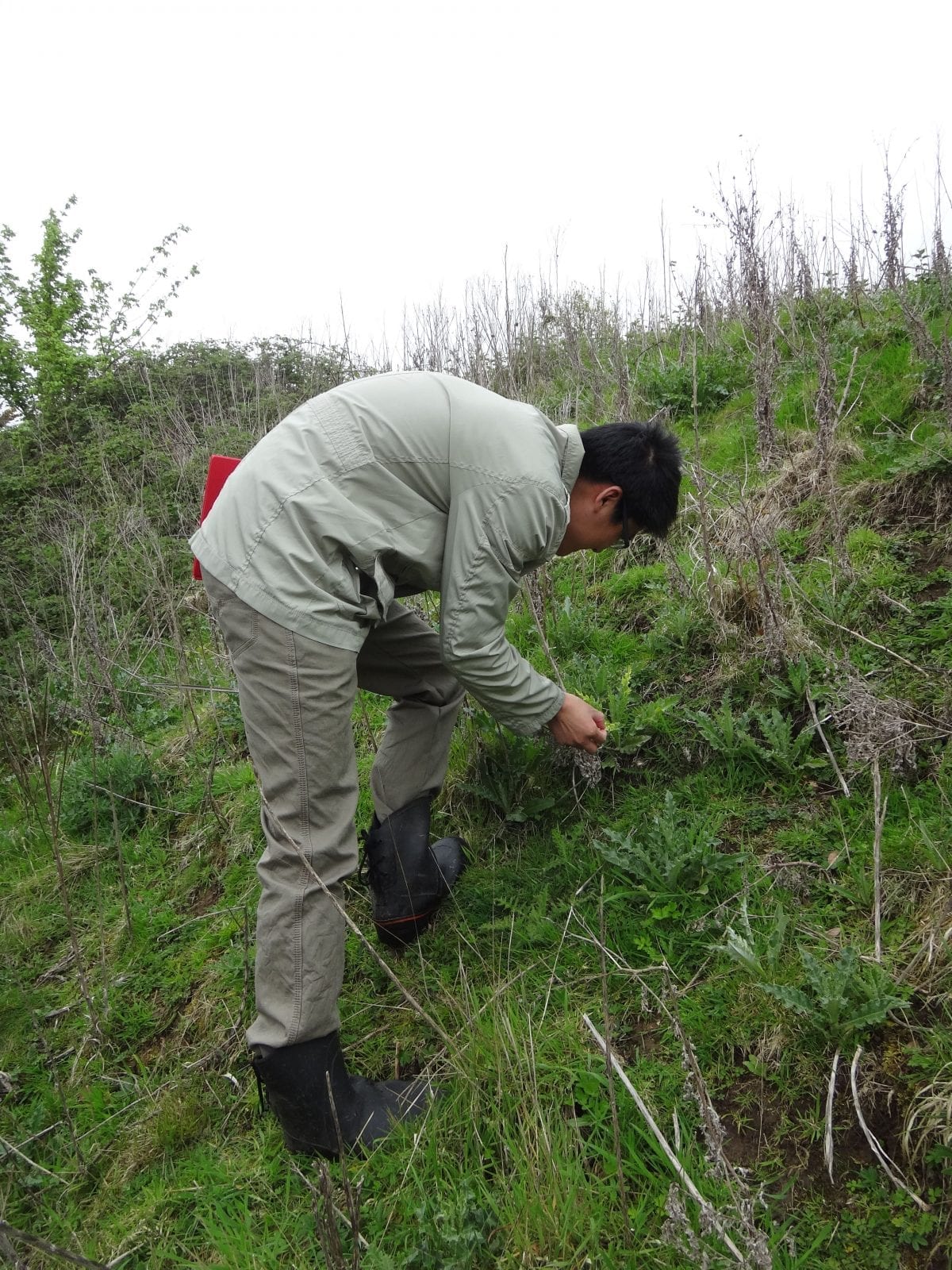 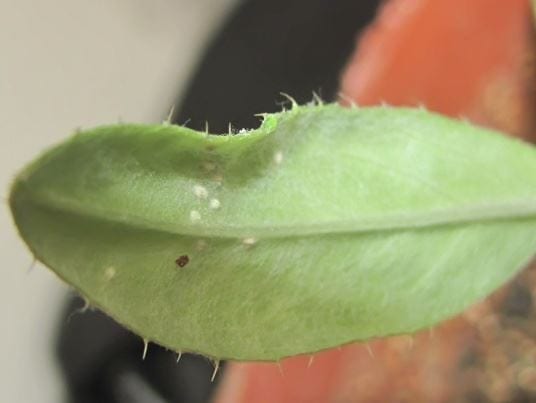 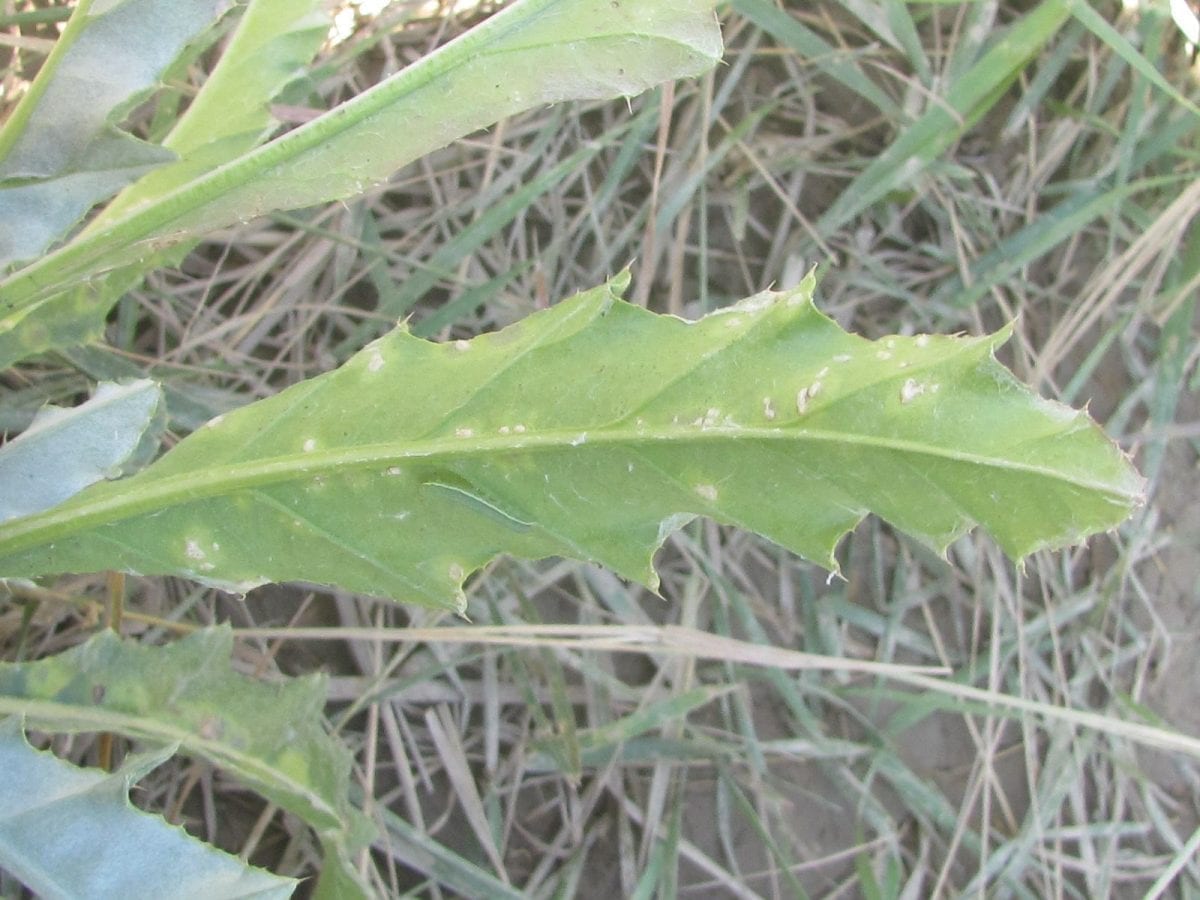 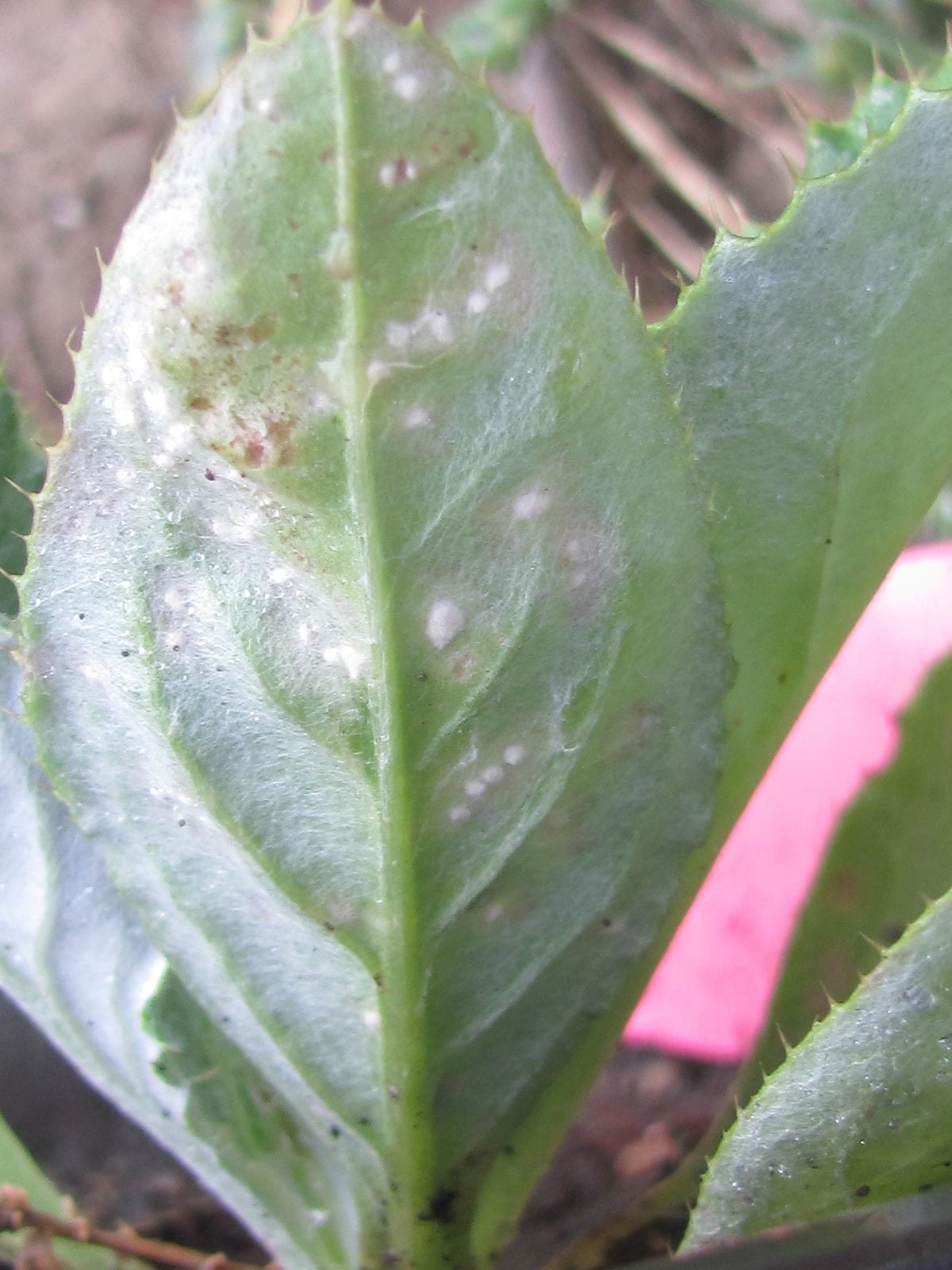 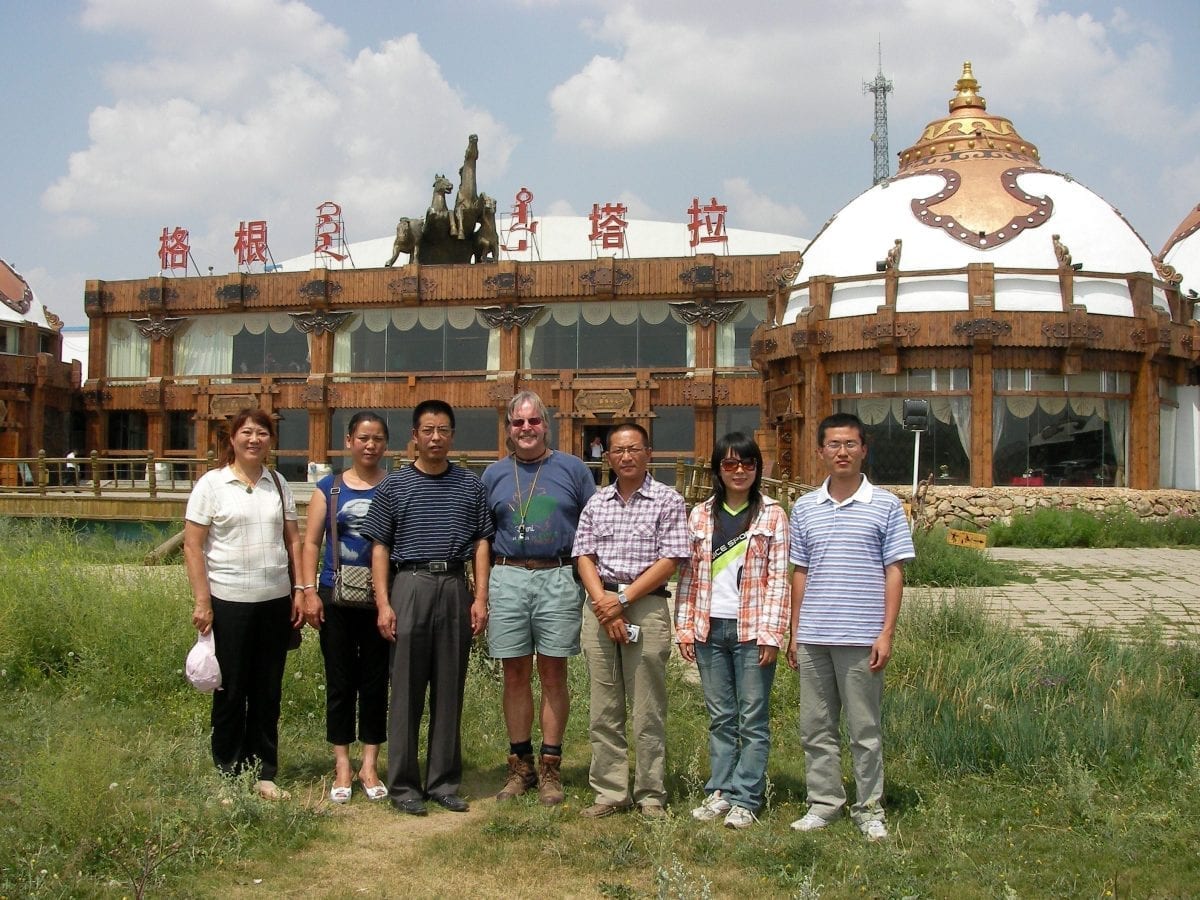 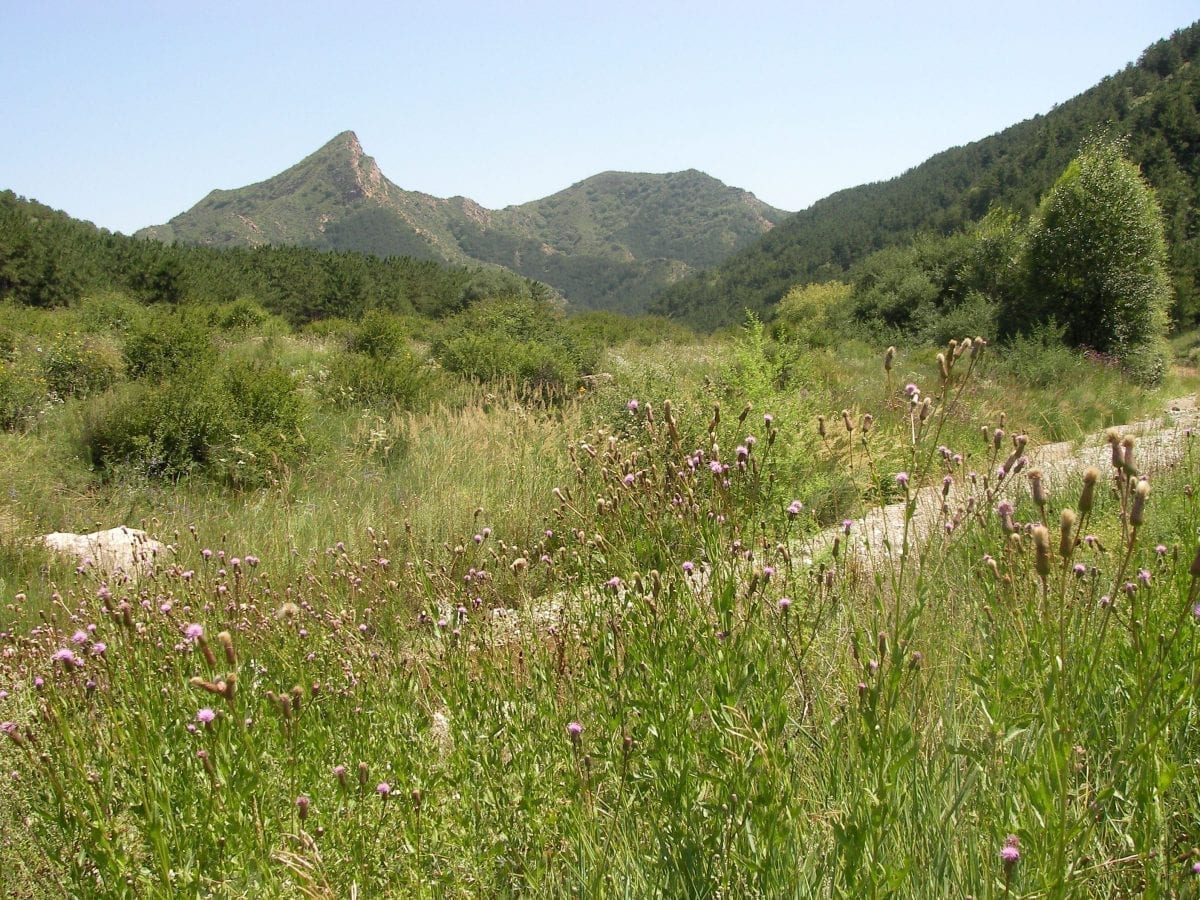 Canada thistle – also called Californian thistle and creeping thistle – (Cirsium arvense), is a perennial herbaceous plant native to Eurasia. By the start of the 20th century, it had been spread throughout temperate regions of the world, where its impacts in rangeland and crops now inflict severe economic losses on farmers. Despite over a century of research, controlling Canada thistle has met with limited success. In North America, six insect biological control agents have been deliberately introduced. Several more arrived, like the thistle, by chance. None of them have halted the weed’s spread or reduced its impact. Finding suitable additional agents has proved equally problematic. The ideal biological control agent is very specific and attacks only the target weed. Natural enemies vary in this regard, and sometimes a biological control agent can be approved despite being less specific. But because Canada thistle has close relatives among native North American thistles, the specificity of any new agent will have to be very high. Surveys in Canada thistle’s likely area of origin did not find any additional insect species that were this specific.

Disease-causing fungi can be more specific than insects, so CABI decided to concentrate on looking for plant diseases (fungal pathogens) on Canada thistle in its area of origin. The specificity of a natural enemy reflects how closely its evolution has been linked to that of its host (how coevolved they are). Coevolved fungal pathogens, particularly those that can only grow and reproduce on their hosts (biotrophs) are often highly specific. The natural range of Canada thistle is huge, so we considered three factors and narrowed the search to western China. First, there have been few surveys for natural enemies in this area, second, a large number of Cirsium species are found there, which should increase our chances of finding natural enemies, and third, some areas are similar in terms of climate and habitats to Canada thistle-infested areas in North America, meaning a natural enemy from these areas would be more likely to thrive if introduced.

In 2009 – 2010, we conducted surveys in Inner Mongolia and Xinjiang and Gansu provinces. We identified the white blister fungus Pustula spinulosa as the most promising pathogen.

We thought at first that this fungus might be another species, one that attacks other plants in the same family (Asteraceae). However, investigations clearly showed it to be P. spinulosa, which has only been recorded to infect species in the genus Cirsium.

We tested three native North American Cirsium species (C. undulatum, C. undulatum var. tracyi, and C. ochrocentrum) under greenhouse conditions in China and the UK. We found that all three developed very mild disease symptoms (some bleaching or chlorosis and very limited development of disease pustules). Non-target plants that are weakly susceptible under artificial conditions are usually disease-free in more-natural situations. So we tested the three species under open-field conditions in China, along with C. arvense plants from the USA. Unexpectedly, all three native North American Cirsium species became infected at a level comparable to the infection we recorded in C. arvense. We suspect that a parasitic fungus (mycoparasite) that attacks P. spinulosa may have limited its infection of the non-target species in the laboratory, but had no impact in the field where humidity is lower.

We had to conclude that P. spinulosa is not a suitable biological control agent for Canada thistle in North America. And since there is little likelihood of finding other suitable fungal pathogens, no additional surveys are planned at present. 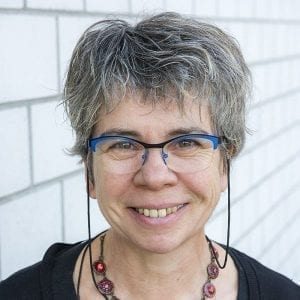