Huanglongbing (HLB), also known as citrus greening disease, is one of the most devastating pathogens of citrus worldwide and is caused by closely-related species of systemic Candidatus bacteria. Vectored by the Asian citrus psyllid (ACP), Diaphorina citri, the heat-tolerant, Asian form of the disease, Candidatus Liberibacter asiaticus (CLas) is the most serious and widespread.

In East Africa, the heat-sensitive form of the disease is vectored by the African citrus triozid (ACT) Trioza erytreae and remains the most prevalent disease, particularly in the cooler, mid to high altitude areas. Since 2010 however, CLas which can also be transmitted by T. erytreae, has been spreading in the African continent and significantly, the Asian HLB vector has also been detected in Tanzania and Kenya. There is now a clear and present threat of HLB to the citrus industry in Africa, including the previously sustainable warmer citrus producing regions of East Africa. Modelling of environmental suitability suggests that without preventative measures CLas could establish widely in Africa, with potential hotspots in Central and South-eastern Africa, incurring substantial economic losses. The following evidence note reviews the global literature on the HLB pathogen-vector complex, highlighting potential risks and estimating economic impact for Africa. A synthesis of recommendations for biosecurity preparedness, surveillance and management options is outlined to inform decision makers and growers. 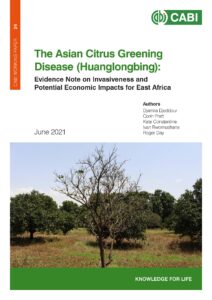