You are here: Home / CABI Publications / Towards a Typology for Agribusiness-based Advisory Services: Model Description and Analysis

Towards a Typology for Agribusiness-based Advisory Services: Model Description and Analysis

Extension services play a crucial role in providing farmers with the tools and knowledge they need to increase their yields, improve their food security and livelihoods and build resilience against climate shocks. While private sector-led extension services are increasingly complementing government efforts in many countries, their models and approaches remain widely undocumented. This working paper used a literature review approach and key informant interviews to develop a framework describing patterns/models used by agribusinesses in providing extension services, with a focus on documenting how services are organized and funded as well as the merits and demerits of each approach. The organization of Agribusiness-based Advisory Services (ABAS) is largely influenced by the context, purpose and capacities of the agribusiness. Among others, factors such as the size of the agribusiness, orientation towards profits or social returns, specific requirements of commodities involved and markets targeted play an important role in defining models. Six implementation models are described: i) advisory services by agribusiness’ own staff, ii) working through lead farmers (farmer extensionists), iii) working through agrovets, iv) one-stop-shop networks, v) commercial farm-based advisory services and vii) sub-contracting advisory services. A separate chapter briefly reviews models of private advisory services provision by independent service providers. The study observed that in general, farmers reached were commercially oriented farmers able to invest in inputs and handle the associated risks, except for enterprises sourcing bulk products such as cassava or grains. It was also noted that many so-called “private” sector advisory services continue to rely on public-sector (co-) funding, often from donors channelled through third parties using a contract approach. 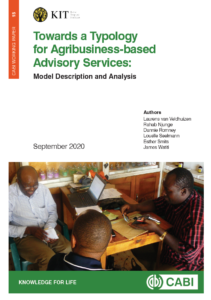 Towards a Typology for Agribusiness-based Advisory Services: Model Description and Analysis

Poor soil fertility is a key constraint to improving farm productivity and farmer livelihoods in sub-Saharan Africa. Integrated Soil Fertility Management (ISFM) is recognised as an effective solution to poor crop yields. However, lack of access to information means that smallholder farmers do not adopt better techniques. To combat this, we are working with partners to add value to communication campaigns that are designed to facilitate adoption and capture learning.