Despite significant progress made over the past 15 years, the agricultural sector in Albania remains underdeveloped, characterized by low technology, low productivity and institutions that struggle with a lack of funding, as well as poor connection to international partners.

To tackle these problems, between 2008 and 2011, CABI implemented a project in Albania, funded by the Swiss Agency for Development and Cooperation (SDC), on Integrated Pest Management (IPM). This was followed by a three-year institutional partnership project funded by the Swiss National Science Foundation (SNF) within the Scientific Co-operation between Eastern Europe and Switzerland (SCOPES) programme.

In 2009, an Apple Integrated Production (IP) Producer Club was established in seven different villages in the Korca region of Albania. It was officially accredited by the government in Tirana. All Producer Club members had to agree to produce according to an IP standard, developed by project partners and based on the internationally agreed standards set by the International Organization for Biological and Integrated Control (IOBC). Season-long training ensured that IP producers were able to understand the rules and follow them. A membership fee for the Producer Club was also defined and agreed upon, enabling the establishment of an advisory service and training for the Club’s members.
By the end of the first SDC funded project, Apple IP producers:
•no longer carried out prophylactic spraying
•completely eliminated the use of highly toxic World Health Organization (WHO) class I pesticides
•applied 40% fewer treatments using WHO class II pesticides than non-members
•applied 20% fewer pesticide treatments throughout the season, compared to previous years.
Together with a 50% reduction in the volume of pesticides applied per treatment, an overall reduction of 60% of the amount of pesticides was achieved, compared to common practice. Producer Club members improved quality substantially, with 85% of the apples produced rated as grade I at the end of the project, compared to 55% of the apples produced in previous years. The number of apples infested by apple scab was two to five times lower for Producer Club members than for non-members.
Most of the c. 2,000 apple producers in the Korca region are aware of the activities of the Producer Club and many have been adapting their pest management strategies according to what they see happening at neighbouring IP producers’ farms or are showing a high level of interest in joining the club.
Building upon the relationships, and in order to upscale and multiply the positive effects achieved by the SDC project, Albanian partners Agrinet (NGO), the University of Korca, the Agrobusiness School Korca and the Centre for Agricultural Technology Transfer were further supported through the SNF funded SCOPES programme. Knowledge was transferred to partner institutions on technical aspects of IPM, improving capacities for scientific experiments and teaching. Most importantly, IPM lectures were established at both the University and Agrobusiness School of Korca, allowing further transfer of knowledge on IPM and sustainable agriculture to students, who will influence the agricultural sector in the near future.
In addition to the 800 Microsoft PowerPoint slides, lecture hand-out books were developed and printed to provide the students at the University and Agrobusiness School (20–40 students each year) with first-hand information for the next six to eight years. Based on the project’s positive outcome, the Albanian government decided to implement the same IPM lecture in all of the other five Agrobusiness Schools in the country.
Some copies of the lecture hand-out books were transferred to them at the end of the project. In addition, two young Albanian researchers were selected to receive advanced, season-long training on IPM and biological control in Switzerland. The project is expected to lead to the implementation of more environmentally-friendly and sustainable pest control solutions in Albanian agriculture. 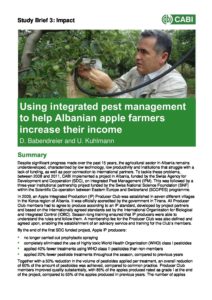