The Chinese government has increasingly opened up its agricultural extension sector over the last three decades in response to growing service demand, bringing many actors into the scene. One outcome has been the diversification of information sources for farmers, which now include agricultural input suppliers, farmers’ associations, the mass media, nongovernmental organisations etc. Information is an essential input in farming decision-making and the lack of it, the wrongful use of it or the use of an inaccurate form of it could produce catastrophic consequences for farmers. For information to generate the greatest benefit for farmers it must be credible, timely, specific to farmers’ concerns, packaged based on their circumstances and delivered by an authority they regard as credible.

In a pluralistic extension delivery system, farmers face the difficulty of determining which source of information is dependable. And since farmers’ information-seeking behaviour is dependent on their intrinsic and socioeconomic qualities, ensuring access by all farmers to reliable information is difficult to guarantee.

The Chinese Academy of Agricultural Sciences and Plantwise undertook a study October 2013 to April 2014 in Peng Shan county, Si Chuan province of China among 144 households to learn about how farmers interacted with the providers of agricultural advice, including the newly introduced plant clinics, and if lessons existed that could help in refining and enhancing the extension services. 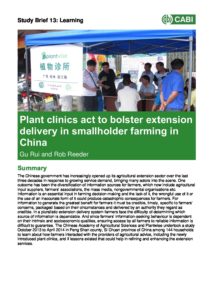