Plantwise (PW) is a global programme led by CABI that is improving farmers’ livelihoods by providing them with plant health information in order to reduce production losses and increase crop yields. In Kenya the programme was launched by the Ministry of Agriculture, Livestock, Fisheries and Irrigation (MoALFI) in 2012. In 2013 advisory services were devolved to 47 county governments. This qualitative study was conducted to help: understand what factors had encouraged funding in some counties; whether and how the programme had influenced the evolution of county extension systems during the uncertain devolution period (2013-2016);
and whether and how the programme was being institutionalized and integrated at county level. The study found that Plantwise contributed to shaping agricultural advisory systems following devolution and provided an innovative approach that county governments could adapt. Two counties had scaled up the PW approach in their county agriculture extension system by including plant clinics into their County Integrated Development Plans (CIDPs) and performance contracts of senior cadre. This ensured clinics were eligible for county government funding to support recurrent costs as well as scale out. Institutionalization secured
the programme from being marginalized whenever there were high demands for allocation of resources. In counties where PW was integrated, there was evidence that the ministers had demonstrated programme benefits to their seniors, in particular how the service contributes to reducing crop losses thus becoming an important part of meeting the county’s food security needs. The study concluded therefore, that CABI and partners should invest in measures to integrate PW into policy and funding instruments at the county level to ensure sustainability. Interactions between PW management and county governments should primarily target the county ministers for agriculture as key policy makers. 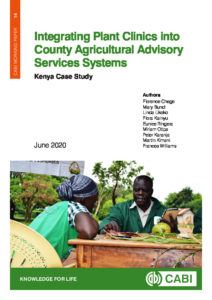