In Punjab province, home to more than half of Pakistan’s cultivated land, the agricultural extension department has only managed to provide information and advisory services to around 10% of the farming population. Working in partnership with the Punjab Department of Agriculture, with funding from the Department for International Development (DFID), CABI has designed and piloted an IT based system to support extension activities in three districts, in order to extend this reach. In one of the districts, Vehari, a full-scale pilot was conducted between 2011 and 2013 involving extension staff from headquarters down to field level.

The IT-based system, known as E-Zaraat, includes the development of a central database for the recording and analysis of field observations, a mobile application for submission of data from the field, and provision of mobile tablets to extension staff and training in their use for both sending and receiving information. E-Zaraat has also established a farmers’ helpline, whose call service agents have access to a newly created database containing over 700 frequently asked questions on key crops such as cotton, wheat and a range of other crops.

Through intensive training, coaching and online help, the new system has been successfully adopted by extension staff, with significant benefits in terms of staff morale and performance and improved communication between farmers and the extension services, with knock-on benefits in crop yields and profitability. Major improvements have been observed in the coverage and effectiveness of extension services, data capture, retrieval and monitoring of staff activities.

In the Vehari district coverage by the extension services has improved such that around 19% of farmers are now being reached. Senior extension staff in Punjab are currently looking to extend the system to other districts in the province, while the World Bank has drawn on the experience of E-Zaraat in introducing an IT-based system within an agricultural growth project in Sindh province. 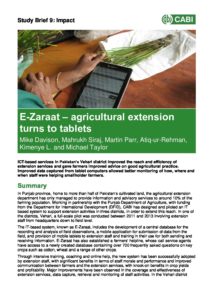