1. Since 1993 an aphid pest has been reported as becoming a serious problem in the Yemen. This accidently introduced pest, Pterochloroides persicae, the brown peach aphid, is a known pest of fruit trees in the genus Prunus and in Yemen is causing severe damage to Pr. persica, Pr. amygdalus and Pr. domesticus. The pest is thought to originate in China and has slowly dispersed westwards invading new areas.

2. A suggested strategy is for integrating chemical control by the application of compatible and selective chemicals on a needs basis, allied with some cultural methods, with a complementary release of biological control agents to achieve a sustainable long term solution. The exotic nature of the pest, and its outbreak in the absence of its natural enemy complex, would indicate that it would be an ideal candidate for classical biological control. This would involve the introduction of one or more of the natural enemies primarily responsible for its control.

3. A number of natural enemies have been identified as attacking the brown peach aphid, however it is proposed that the host specific parasitoid Pauesia antennata be the first agent imported and released. This parasitoid is the most commonly recorded and predominant natural enemy of the aphid in Central Asia. It has equivalent biological attributes to other aphid parasitoids which have proved successful in classical biological control programmes.

4. The biology and behaviour of Pauesia antennata have co-evolved with the aphid to such an extent that it will not pose a risk to other non-target species, human or animal health or the environment. Procedures will be taken prior to importation to ensure there is no risk of introducing any harmful contaminants into the Yemen. 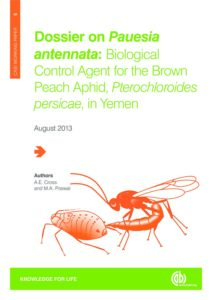