You are here: Home / CABI Publications / Demonstrating the cost of invasive species to Great Britain

Demonstrating the cost of invasive species to Great Britain

Invasive Non-Native Species (INNS) can have a detrimental effect on biodiversity, crop production and livelihoods across the world, and Great Britain is not exempt from this problem. Some of the most troublesome invasive species are now a common sight in Great Britain, for example, Japanese knotweed and the grey squirrel, but at what cost?

Until recently, the cost of INNS to the British economy was uncertain with previous estimates believed to be too low. However, in 2010, Defra, the Scottish Government and Welsh Assembly commissioned CABI to obtain an estimate of “The economic cost of invasive non-native species on Great Britain”. This report considered the cost of INNS across 12 different sectors in the UK with a number of case studies looking at the cost of eradicating specific species. A better understanding of the negative impacts of INNS will help make people more aware of these species, prevent new introductions, and give impetus to deal with the problems caused by established invasive species.

Through a combination of literature reviews, questionnaires, expert interviews and peer reviews, CABI ascertained that, at the time of writing, the economic impact of invasive species was around £1.7 billion per year (nearer £1.8 billion now). The report and the figures relating to the economic impact have been widely cited in mainstream and specialist media, in authoritative academic articles, and in parliamentary and policy documents.

Key opinion formers in important bodies such as Defra, the Environment Agency and the RSPB cite it as providing valuable evidence, which has influenced policy and practical management decisions related to tackling invasive species in the UK. An expert from the RSPB indicated that it, “gave us evidence that we had to do something”. The Scottish Environmental Protection Agency said it shows that, “prevention is better than cure”. Natural England suggested that, “the findings have influence across government and across society”. Niall Moore, head of the GB Non-native Species Secretariat describes the report as, “one of the most significant research projects that we commissioned in the past eight years”. The report is of relevance to other countries, especially in Europe. 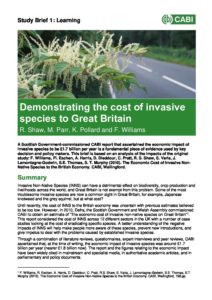 Demonstrating the cost of invasive species to Great Britain