While women play an equally important role as men in Pakistan’s farming systems, they typically have little access to information on modern farming techniques due to cultural rules that prevent them interacting with male agricultural extension staff. In 2013 and 2014, CABI initiated farmer training activities specifically targeting women in two areas of the country: Gilgit-Baltistan in the high north, and southern Punjab in the flatter central part of Pakistan.

In the north, CABI worked with a local development project to set up farmer field schools for both men and women; these focused on production of tomatoes and dairy livestock. In southern Punjab, CABI’s Skills for Farms project ran a series of three-month, village-based training courses in kitchen gardening and grain storage, targeting women between 16 and 35 years old. In each case, the training courses were designed to focus on household farming activities that are typically the responsibility of women.

In Punjab, attitudes towards the training of women had become more positive following the floods of 2010, when numerous development organisations set up support programmes in the area to help communities restore their livelihoods. In Gilgit-Baltistan, there was much greater initial scepticism and criticism of women’s involvement in the field schools. However, after the first batch of trainees was seen to make significant progress in their farming knowledge and practices, community attitudes to the programme were transformed. Women’s influence and respect within their households also improved. Prior to the training, less than 5% of women interviewed in southern Punjab reported having a say in household spending decisions; that figure rose to almost 50% after the training. Beyond the household, trained women have also become more respected in their communities as a source of knowledge on modern agricultural practice. Importantly, impact research has also revealed different responses among women and men in adopting the new farming methods. In Gilgit-Baltistan, all women trainees were found to be earning more money from their tomato and dairy activities, which they had significantly increased following the training. Men, in contrast, were less interested in the production aspects of the training, which they tended to pass on to female household members, and were more interested in ‘monetising’ the training, through the marketing skills they were taught.

This finding will help to guide future training work, in selecting appropriate activities for either men or women, according to their roles within their household farming system. Other lessons that can guide CABI’s work include: the value to families of training women; the trade-offs between targeting more educated women (of at least 8th Grade) or having mixed groups of educated and uneducated women, in order to maximise the training benefits; the need to encourage provincial agricultural departments to increase their numbers of female extension staff; and the value of working in partnership with local rural development programmes. 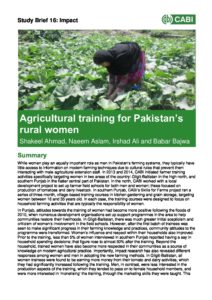