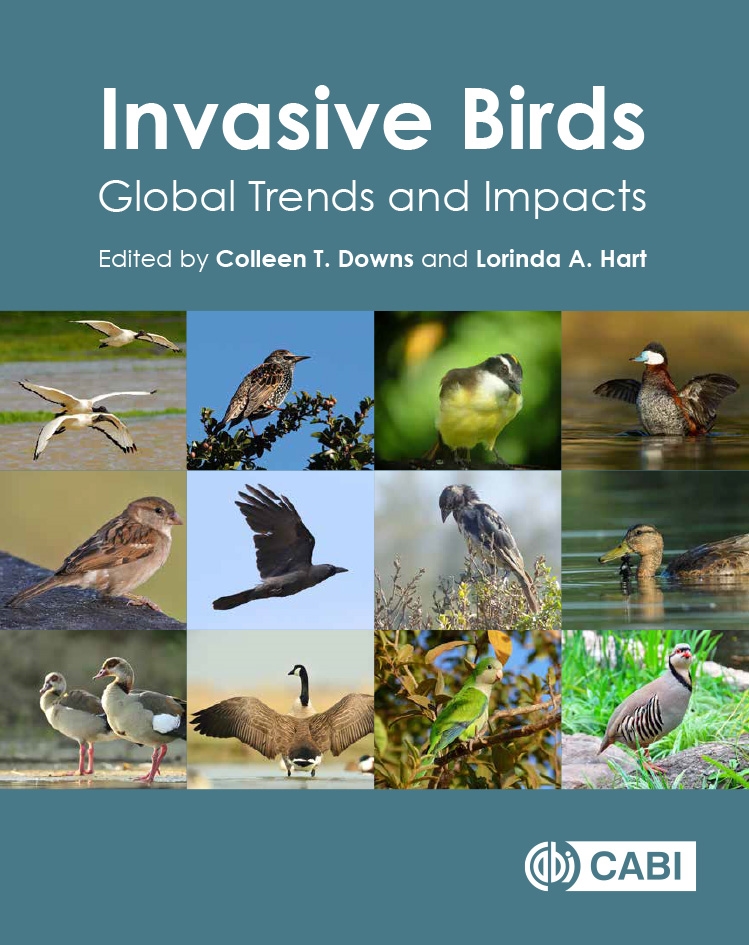 Examining globally invasive alien birds, the first part of this book provides an account of 32 global avian invasive species (as listed by the Invasive Species Specialist Group, ISSG). It acts as a one stop reference volume; it assesses current invasive status for each bird species, including details of physical description, diet, introduction and invasion pathways, breeding behaviour, natural habitat. It also looks at the environmental impact of each species, as well as current and future control methods. Full colour photographs assist with species identification and global distribution maps give a visual representation of the current known distributions of these species.

The second part of the book discusses the biogeographical aspects of avian invasions, highlighting current and emerging invasive species across different regions of the world. The third section considers the impact of invasive species on native communities, problems associated with invasive bird management and the use of citizen science in the study of invasive birds.

This book will primarily appeal to researchers, students, scientists, conservation managers, government officials, risk assessors and anyone directly involved in researching, managing, or drawing up risk assessments for invasive bird species around the world. It is relevant to courses on invasion ecology.

Acts as a one stop reference volume...An ideal and unreservedly recommended addition to professional, governmental, college, and university library Ecology and Zoology collections in general, and Ornithology supplemental curriculum studies lists in particular, it should be noted for the personal reading lists of students, ornithologists, and non-specialist general readers.

Prof. Colleen T. Downs is a South African Research Chair and has been based at the University of KwaZulu-Natal since 1994. Her research interests are broad and interdisciplinary, spanning the conservation, ecology, physiology and behaviour of terrestrial vertebrates with changing land use. This includes ecosystem health in KwaZulu-Natal, incorporating conservation, general biology and persistence of mammal, herpetological and bird species with changing land use (including urban ecology). There is a focus on species such as Cape parrots, bushbuck, oribi, pelicans, Cape vultures, Nile crocodiles, fruit bats, raptors, small carnivores and feral cats. Her other key contribution has been in the development of increased research capacity at both undergraduate and postgraduate levels. Her research group is currently investigating ecosystem health and functionality across a range of taxa and biomes in the Eastern Cape and KwaZulu-Natal Provinces of South Africa, with a focus on species distributions, persistence and anthropogenic threats. They have also produced recommendations for conservation and landscape managers on how best to preserve ecosystem functionality based on sound ecological research.

Dr. Lorinda A. Hart is a lecturer at the University of Namibia and Honorary Researcher at the University of KwaZulu-Natal. Her research interests are broad, covering ecophysiology, and urban and invasive ecology. Her PhD focused on avian and bat frugivores which feed on invasive fruits commonly found in South Africa, quantifying the effects that these frugivores have on invasive seed germination and the energetic rewards they gain. After her PhD she conducted public surveys and determined the current distribution of the rose-ringed parakeet in the in the greater Durban Metropolitan area of eThekwini. She is currently involved in several projects examining a range of species including fruit bats, birds of prey, woolly-necked storks and a variety of seabirds from the Seychelles. She is also an invasive species consultant with the South African Green Industries Council (SAGIC).