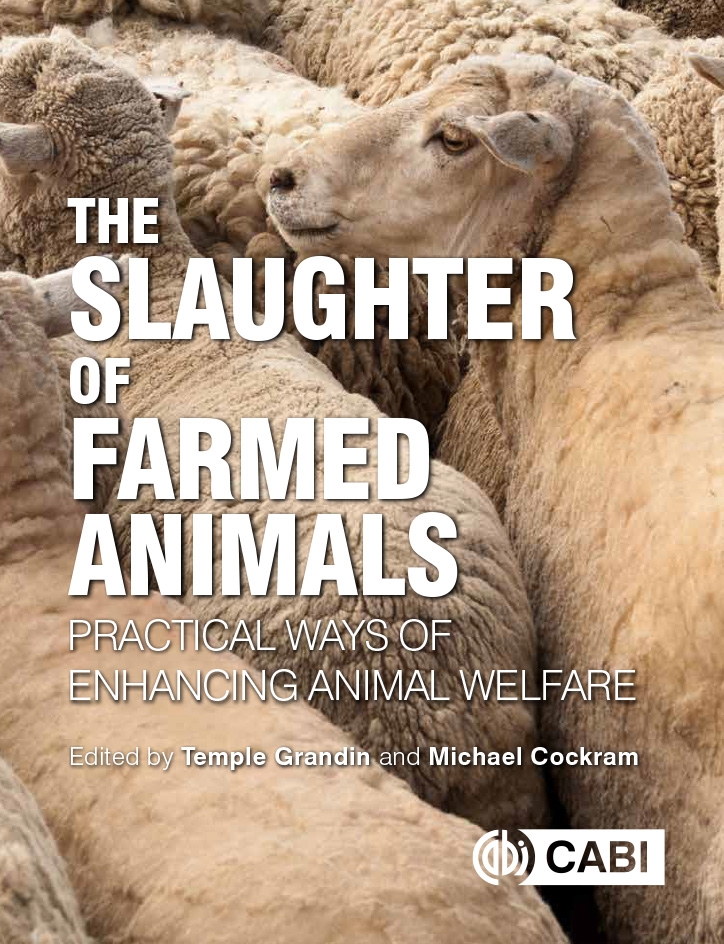 The Slaughter of Farmed Animals

This book provides both evidence-based scientific studies and practical guidance to enhance the welfare of cattle, pigs, sheep and poultry at slaughter. Temple Grandin and Michael Cockram have brought together a range of international experts to prepare chapters on philosophical and ethical views on the slaughter of farmed animals. These include welfare issues and their assessment, the condition of animals on arrival and their management during lairage, animal handling, methods of humane slaughter and assessment of unconsciousness. The book boldly tackles controversial issues around the compromises necessary when balancing animal welfare concerns with commercial realities, as well as religious slaughter. Chapters cover methods of stunning, pre-slaughter handling, equipment design, monitoring welfare with abattoir data and auditing methods. It is an important publication for those involved in implementing improvements in the humane slaughter of farmed animals and is recommended for veterinarians, students, abattoir managers and government regulators.

This detailed and comprehensive guide to the complex field of welfare is an extremely useful practical reference text and resource of evidence-based opinion, edited by two leading figures and with contributions by a number of key experts from across the globe...This text should be considered one of the definitive works in the field of welfare at slaughter - in its practice as much as the theory. - Claire I White, Animal Welfare

A great compilation of an extensive amount of practical and scientific information as it relates to animal welfare, slaughter, and meat quality written in an easy-to-read and understand format. This book can be used as a reference for anyone involved with the slaughter and handling of animals, including plant managers, workers, inspectors, veterinarians, and producers. As a regulatory veterinarian of state-inspected facilities, I found this book to be an excellent reference for assessing animal welfare and humane handling during the slaughter process. - Erik Jopp, DVM, Journal of the American Veterinary Medical Association

Temple Grandin is Professor of Animal Science at Colorado State University. Dr. Grandin’s work includes design of animal handling systems, research on livestock behaviour, and auditing animal welfare. She has visited 26 countries and has served on the OIE animal welfare ad hoc committee for slaughter. Her previous livestock books include Livestock Handling and Transport, Genetics and the Behavior of Domestic Animals and Humane Livestock Handling. Her popular press books on animal behaviour have been both U.S. and international bestsellers. Throughout her career, Dr. Grandin has worked to combine scientific research results with practical application in the field. In the North America half, the cattle are handled in equipment she designed for meat plants. She has received awards for her work on animal welfare from both the livestock industry and animal welfare NGOs. She has swards from The Royal Society for the Prevention of Cruelty to Animals, The American Meat Institute, American Society for Animal Science and the Humane Society of the U.S.

Michael Cockram is a Professor at the Atlantic Veterinary College, University of Prince Edward Island, Canada where he is the Chair in Animal Welfare, at the Sir James Dunn Animal Welfare Centre. Dr Cockram has a veterinary and academic background in animal welfare. He obtained his veterinary degree and PhD in the UK and then worked at the University of Edinburgh. He studies the welfare implications of the management of animals, and the relationships between health, physiology, behaviour and animal science. He has published research on the transport, lairage and handling of livestock and poultry, and other animal welfare issues. Much of this research was conducted within commercial slaughter plants. He has worked with industry groups to apply the results of scientific research to commercial situations and has participated in the development of several animal welfare codes of practice. His previous book chapters have been on the welfare implications of health and disease, sheep transport and the effects of handling, transportation, lairage and slaughter on cattle welfare and beef quality. Dr Cockram serves as the Welfare and Behaviour Section Editor for animal: an international journal of animal bioscience, he organised the 2018 International Congress of the International Society for Applied Ethology and is currently the Chair of the Large Animal Subcommittee of the Canadian Veterinary Medical Association, Animal Welfare Committee.

The Ethology of Domestic Animals

Edited by: Per Jensen