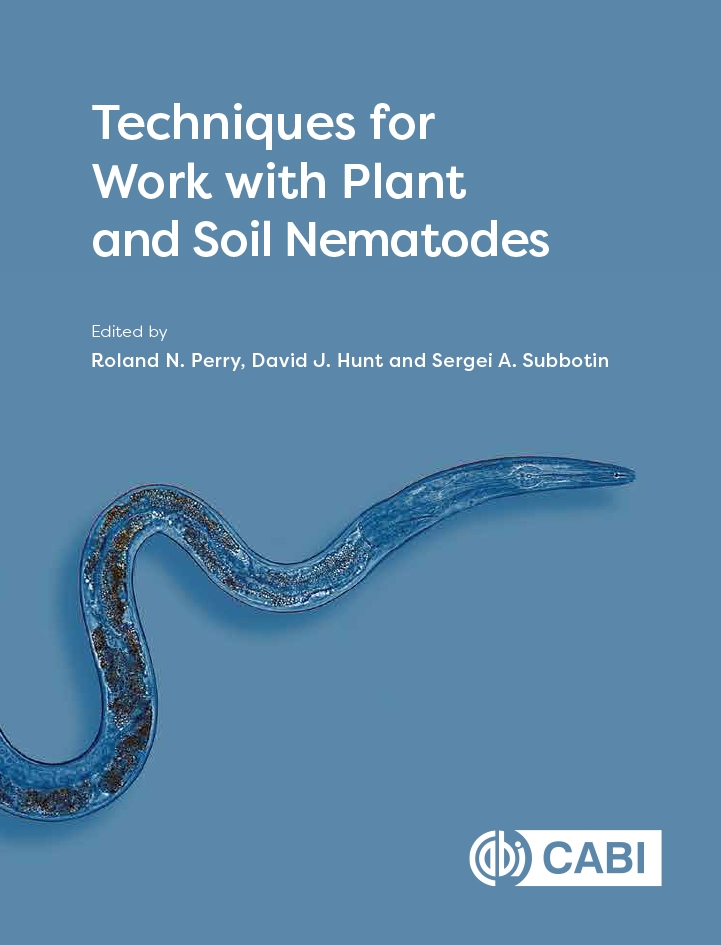 Techniques for Work with Plant and Soil Nematodes

Plant-parasitic and free-living nematodes are increasingly important in relation to food security, quarantine measures, ecology (including pollution studies), and research on host-parasite interactions. Being mostly microscopic, nematodes are challenging organisms for research. Techniques for Work with Plant and Soil Nematodes introduces the basic techniques for laboratory and field work with plant-parasitic and free-living soil-dwelling nematodes.
Written by an international team of experts, this book is extensively illustrated, and addresses both fundamental traditional techniques and new methodologies. The book covers areas that have become more widespread over recent years, such as techniques used in diagnostic laboratories, including computerized methods to count and identify nematodes. Information on physiological assays, electron microscopy techniques and basic information on current molecular methodologies and their various applications is also included.
This book is an essential resource for students of nematology and parasitology, academic researchers, diagnostic laboratories, and quarantine and advisory service personnel. It provides a much-needed methodology standard for anyone involved in work on plant and soil nematodes.

Suitable for students and researchers of nematology and parasitology, as well as quarantine and advisory service personnel.

I have no doubt that Techniques for work with plant and soil nematodes will be an invaluable reference to both students and experienced nematologists for identifying traditional and molecular techniques. This is not a book that will sit pristinely on our bookshelves; it is a book that will travel in and out of the laboratory or back home for some evening study. - Matthew A Back, Nematology

The editors and authors are to be congratulated for their initiative and achievement in the production of such an enjoyable book that is well written and comprises a valuable tool for those involved in the fields of Nematology and Plant Pathology (scientists, teachers, students, extension officers). - Pablo Castillo, Plant Pathology

Professor Roland Perry is based at the University of Hertfordshire, UK. He graduated with a BSc (Hons) in Zoology from Newcastle University, UK, where he also obtained a PhD in Zoology on physiological aspects of desiccation survival of Ditylenchus spp. After a year’s post doctoral research at Newcastle, he moved to Keele University, UK, where he taught Parasitology; after 3 years at Keele, he was appointed to Rothamsted Experimental Station (now Rothamsted Research). His research interests centred primarily on plant-parasitic nematodes, especially focusing on nematode hatching, sensory perception, behaviour and survival physiology, and several of his past PhD and post-doctoral students are currently involved in nematology research. He remained at Rothamsted until 2014, when he moved to the Department of Biological and Environmental Sciences, University of Hertfordshire. He co-edited The Physiology and Biochemistry of Free-living and Plant-parasitic Nematodes (1998), Root-knot Nematodes (2009), Molecular and Physiological Basis of Nematode Survival (2011), the first (2006) and second (2013) editions of the text book, Plant Nematology and Cyst Nematodes (2018) (all CAB International, UK). He is author or co-author of over 40 book chapters and refereed reviews and over 120 refereed research papers. He is joint Editor-in-Chief of Nematology and Chief Editor of the Russian Journal of Nematology. He is joint Editor of the book series Nematology Monographs and Perspectives. In 2001, he was elected Fellow of the Society of Nematologists (USA) in recognition of his research achievements; in 2008 he was elected Fellow of the European Society of Nematologists for outstanding contribution to the science of Nematology; and in 2011 he was elected Honorary Member of the Russian Society of Nematologists. He is a Visiting Professor at Ghent University, Belgium, where he lectures on nematode biology, focusing on physiology and behaviour.

Dr David Hunt gained his BSc at the University of Nottingham, UK, and his PhD at the University of Reading, UK. From 1975 to 1979 he worked as a field nematologist in the West Indies and has travelled widely in the Caribbean region and in eastern and southern Africa. From 1979 until 2010 he worked in the UK as a nematode biosystematist for CABI, first at the International Institute of Parasitology and then at CABI Bioscience, where he is now an Emeritus Fellow. He has taught many international courses in nematode identification, these being mainly based in the UK, but also in Africa and Central America. Since 2002 he has been joint Editor-in-Chief of the journal Nematology and joint Series Editor of Nematology Monographs and Perspectives. He has published over 100 new nematode taxa, working mainly with parasites of diplopods and insects, contributed numerous chapters to a broad spectrum of books, authored the book Aphelenchida, Longidoridae and Trichodoridae: their Systematics and Bionomics (1993) (CABI International, UK) and, with Khuong Nguyen, co-edited the monograph Entomopathogenic Nematodes: Systematics, Phylogeny and Bacterial Symbionts (2007) and the subsequent companion volume Advances in Entomopathogenic Nematode Taxonomy and Phylogeny (2016) (both Brill, The Netherlands).

Dr Sergei Subbotin obtained an MSc in Plant Protection in 1981 from the Moscow Agricultural Academy in Russia. In the same year, he joined the Plant Pathology Laboratory in the V. R. Williams All-Russian Fodder Research Institute, Moscow region, and later All-Russian Scientific Research Institute of Fundamental and Applied Parasitology of Animals and Plants named after K. I. Skryabin (former VIGIS), Moscow, where he was awarded a PhD in Helminthology (Nematology) in 1987. Dr Subbotin has worked as a researcher in the Center of Parasitology of the A. N. Severtsov Institute of Ecology and Evolution (Moscow, Russia), Rothamsted Experimental Station (now Rothamsted Research, Harpenden, UK), Institute for Agricultural and Fisheries Research (ILVO, Merelbeke, Belgium), Julius Ku¨hn-Institut (Mu¨nster, Germany), Department of Nematology, University of California (Riverside, USA) and as a Visiting Professor in Ghent University, Belgium. Presently, he serves as Senior Nematologist in the Plant Pest Diagnostic Center, California Department of Food and Agriculture, Sacramento, California, USA, and has affiliation positions as Scientist in the Center of Parasitology, Russia and Associate Scientist in the University of California, USA. Dr Subbotin is one of the Founders and Chief Editors of the Russian Journal of Nematology. He has published more than 190 scientific articles in peer-reviewed journals on different aspects of molecular systematics and diagnostics of nematodes, and is the author of 22 book chapters. He is co-author of the two volume Systematics of Cyst Nematodes (Nematoda: Heteroderinae) (2010) (Brill, The Netherlands), Systematics of the Sheath Nematodes of the Superfamily Hemicycliophoroidea (2014) (Brill) and Entomoparasitic Nematodes of the order Tylenchida and Aphelenchida (2019) (in Russian; KMK, Russia), and co-editor of the two volume Plant Parasitic Nematodes in Sustainable Agriculture of North America (2018) (Springer, Germany). His research studies have focused on molecular systematics, diagnostics and phylogeography of nematodes.