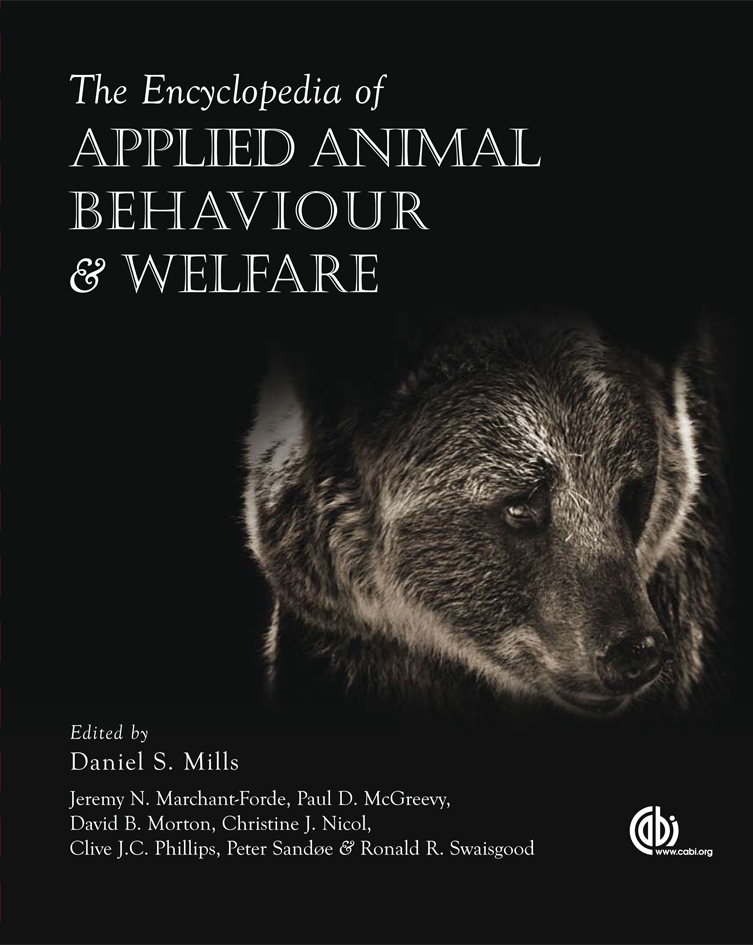 Welfare research has established a range of scientific indicators of stress, welfare and suffering in animals that can be applied to all aspects of improving their welfare through good housing and management, and the topic continues to grow in importance among both professionals and the public.

The practical focus of this authoritative, comprehensive encyclopedia aims to promote the understanding and improvement of animals’ behaviour without compromising welfare. Under the editorial direction of Professor Daniel Mills, the UK’s first specialist in veterinary behavioural medicine, over 180 international experts have contributed a wealth of fully cross-referenced entries from concise definitions to detailed short essays on biological, practical, clinical and ethical aspects of behaviour and welfare in domestic, exotic, companion and zoo animals.

An excellent resource for any and all people who are interested in expanding their knowledge in the fields of Applied Ethology or Animal Welfare... a primary point of reference and definition. "Edited by some of the finest academics worldwide… extremely well written." Veterinary Record, Vol. 170 (2), 2012 Applied Animal Behaviour Science

Professor Mills is an RCVS, European and ASAB recognised specialist in clinical animal behaviour, and was the first professor of the discipline in Europe. While his clinical and scientific work has historically focused on the disruptive effect of companion animal behaviour on owners and society (problem behaviour and its management) through his work as a clinical animal behaviourist, he has more recently pursued an interest in assistance dogs and animal assisted interventions through diverse collaborations. His research in this area has included the first longitudinal study of its kind (3 year follow up) examining the effect of the pet dog on families with an autistic child, the effect of reading to dogs in schools and the impact of dogs in the workplace (currently under review). Professor Mills is a well-known international speaker on companion animal behaviour/welfare and the role of animals in society , with around 100 peer-reviewed full scientific research publications, over 40 books and chapters, and over a hundred ISBN indexed conference abstracts. He heads up a large interdisciplinary group at Lincoln with 11 Post Graduate Research students and 3 Post Doctoral Researchers.